Palin Mixes It Up for Women at GOP Convention

Women in and around the Republican National Convention are expressing wildly divergent views about Sarah Palin, a religious conservative selected as McCain’s running mate. Even GOP pro-choice advocates are divided.

Political action committee EMILY’s List issued polling research saying Palin wouldn’t help McCain attract disaffected Democratic women and Code Pink activists staged a street demonstration against her. But inside the convention many Republican lawmakers and advocates hailed Palin, a staunch opponent of abortion and the governor of Alaska, as a figure of ascendant female power within the party.

While that dissonance may have been predictable, it even extended to pro-choice Republican women gathered at the convention.

“I think it’s a risky choice,” said Jennifer Blei Stockman, national co-chair of the Republican Majority for Choice, a group in New York that advocates for reproductive rights. She said Palin not only jeopardizes reproductive rights, she also knocks the party off-message as the news media digs into her past.

But former Rep. Nancy Johnson of Connecticut, a prominent pro-choice Republican who served two dozen years in the House of Representatives, called Palin a “refreshing” pick who posed no threat to the right to abortion or reproductive rights. “She’s never shown in other offices she has had that she imposed her religious beliefs on others,” Johnson said.

Ann Stone, head of Republicans for Choice, based in Alexandria, Va., echoed Johnson’s praise. “We’re happy about her,” she said. “It shows the boys . . . that history will not end if a woman is in that office.”

Stone acknowledged Palin’s record in opposition to abortion, but said reproductive rights groups “should be doing cartwheels” because news around her teen daughter’s pregnancy illustrates that abstinence-only education–which Palin supports–is not effective.

Palin, 44, a mother of five–including a five-month-old infant with Down Syndrome–is emerging into national view alongside revelations that her unmarried 17-year-old daughter is five months pregnant.

Stone pointed to language in the GOP platform, adopted Monday during a session abbreviated by Hurricane Gustav’s landing in Louisiana, that shows GOP presidential nominee McCain “is someone we can work with.”

“We welcome all to our deliberations in the firm belief that the principles embodied in this platform will prove to be as compelling and persuasive as they are vital and enduring,” it states. “We do not fear disagreement and we do not demand conformity.”

At the same time, the platform calls for granting fetuses full human rights–which would endanger access to some forms of birth control–and an amendment to the Constitution that criminalizes abortion. It also endorses an Aug. 23 federal rule by the Bush administration to protect health care professionals from losing their jobs if they refuse to provide family planning services for religious or personal reasons. That rule goes into effect after a 30-day public comment period.

“If she was truly pro-life, she would be doing everything in her power to end the war as soon as possible,” said Code Pink spokesperson Jean Stevens.

Palin became governor of Alaska in 2007 after serving two terms as mayor of the town of Wasilla, with a population around 7,000, and two terms as a member of the Wasilla City Council.

Many Republican women at the convention hailed Palin as a groundbreaking political figure.

“It’s a new feminism,” declared Laura Ingraham, a radio talk show host who gave the keynote speech at a Tuesday reception, called “Life of the Party.” The event, hosted by the Republican National Convention for Life, drew hundreds of women in red blazers and blinking heart-shaped buttons.

“That she’s a woman is a blessing and a bonus, but it is not the only reason to support her,” said Karen Effrem, a Republican voter from Minnesota, echoing many women at the event.

“Now just wait a minute,” Republican Rep. Kay Granger of Texas asked at an event at an Italian restaurant in Minneapolis. “The question is can you be conservative and a mother and also have a life outside of that, and the answer is ‘Yes!'”

EMILY’s List, a political action committee in Washington, D.C., that works to elect pro-choice Democratic women, released a survey of 800 female voters Wednesday finding that the historic naming of a woman to the GOP vice presidential slot will not help McCain attract Democratic women to his side. The survey was conducted by Garin-Hart-Yang Research Group Aug. 31-Sept. 1.

Fifty-five percent of women who voted for Clinton in the Democratic primaries said Palin makes them less likely to vote for McCain, the survey found, while 9 percent said she made them more likely to back McCain.

Overall, 35 percent of the respondents said the McCain-Palin ticket would be better and 53 percent chose the Barack Obama-Joe Biden ticket.

“Sen. McCain has seriously misjudged women voters if he thinks he can win them over simply by putting a woman on the ticket,” EMILY’s List President Ellen Malcolm said in a statement. “Women voters take their votes seriously and the more they learn about Gov. Palin, the less likely they are to support the McCain-Palin ticket.” 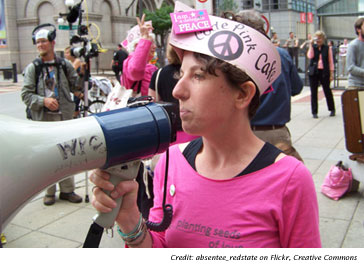