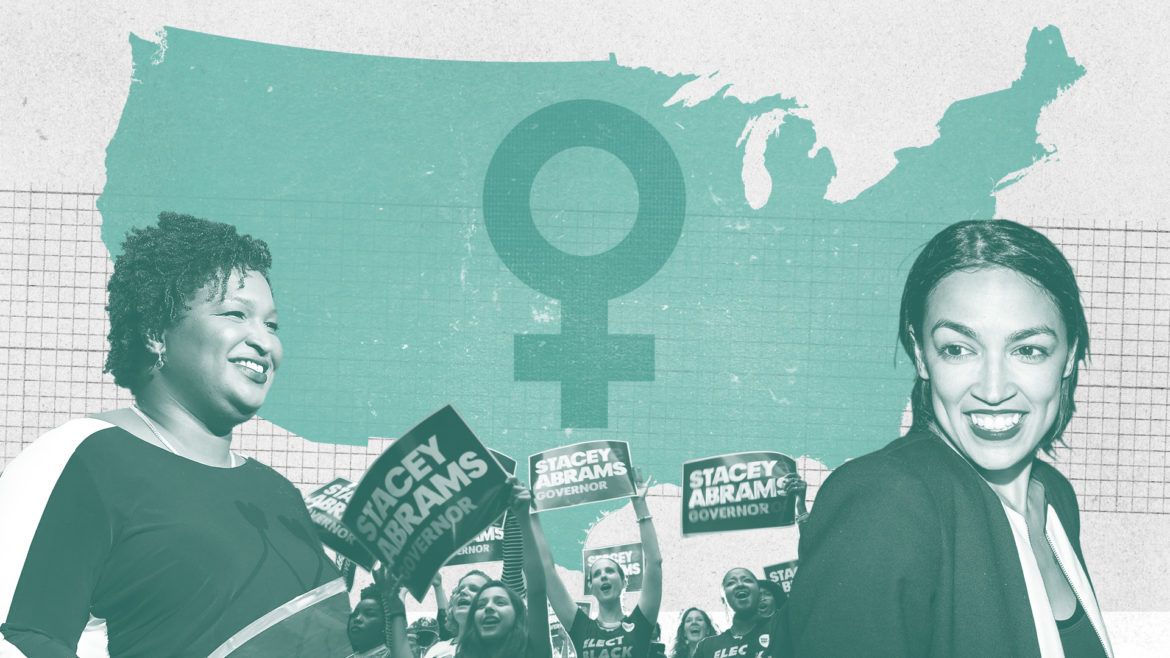 A major hallmark of President Trump’s style is his relentless attack on politically-correct (PC) norms. Down with the elites! Down with career politicians and their constrained language! Down with the fear of offending!

One of the most common reasons people gave for voting for Donald Trump is that he is straightforward and outspoken; he doesn’t mince words. “Unlike so many career politicians, he ‘speaks his mind’ and is ‘unafraid to offend,’ notes the Los Angeles Times.

But as we look ahead to the 2020 elections, Trump is seeing some major competition from an unexpected source. For the first time, women are out-trumping Trump in the ‘I’ve-got-to-be-me department. On the 2018 campaign trail, female candidates were forthright, openly claiming their authenticity; they ran as lesbians, victims of sexual assault, Muslims, mothers of drug-addicted children, bi-sexuals, cancer survivors, and gun-control advocates. They have embraced his anti-PC style, ignoring socially accepted norms and challenging social conventions about what women are and should be. They have stepped out from behind the mask of submissiveness and passivity with pride.

And it worked. Over one hundred women were elected to Congress, breaking all previous records.

Kansas Democratic candidate Sharice Davids is one of the first two Native American women elected to Congress and is also the first openly LGBT candidate to win statewide office there. She is from the Ho-Chunk Nation in Wisconsin and has focused her career on the advancement of Native Americans. Her ethnic identity and sexual orientation were front and center in her campaign, as was her experience as a professional mixed-martial artist. Two muslim women also entered Congress for the first time, Michigan’s Rashida Tlaib and Minnesota’s Ilhan Omar. Omar, a Somali refugee, campaigned wearing Muslim garb. Talib, born in Palestine, took on Trump’s islamophobia by stressing her heritage in her campaign. “I don’t really give space to people who are attacking me based on my identities,” she said.

For all of this we have Trump to thank. Little did he think that his endless chest-thumping brags about “telling it as it is” and “speaking his mind” would have the unanticipated consequence of freeing women to be authentic. And their authenticity helped them to remarkable success at the ballot box. While men and women alike have drawn Trump’s ire, there is a marked difference in how the sexes have responded.

Trump’s non-stop bullying has also had devastating effects on his male targets. Witness the fate of the 16 Republican hopefuls during the 2016 campaign. Frontrunners ‘Lying Ted Cruz,’ ‘Low-energy Jeb Bush,’ and ‘Little Marco Rubio,’ all withered under Trump’s blitzkrieg. Without stooping to Trump’s level, they had no other rejoinder. Since the 2016 election, few Republicans have challenged Trump in any way due to fear of retribution.

In contrast, while women have been constant targets of Trump, their reaction was surprising. They laced up their sneakers and ran for office. In addition to those elected to Congress,  nine women were elected as governors and record numbers of women won statewide office across the U.S.  In the past, women have been muzzled by heavy sanctions against forthright, aggressive, open, honest speech.  No more. Trump’s headlong verbal assaults have backfired.

His assaults on powerful women, while devastating, have not scared off the likes of Theresa May, Angela Merkel, Dianne Feinstein, or Elizabeth Warren. (Warren brushed off Trump’s attacks and won her senate race easily.) Trump ramped up his attacks on prominent black women, who also fought right back. Although ee called representative Maxine Waters, the soon-to-be chair of the House Financial Services committee, a person of “ low-IQ,” Waters snapped right back, calling Trump “dangerous” and a “liar” on MSNBC. Further, Trump recently called three well-regarded black female journalists “stupid” and “losers. ” All three lost no time in responding that their questions were proper and appropriate, and their colleagues agreed.

And, although Stacey Abrams lost a very tight race, she has emerged as a role model for other women showing that you, too, can stand up for yourself and refuse to be silenced by tradition and bullies. Rather than being cowed, she and other women found their voices. The rules of the game have changed, and politics are no longer a hostile place for women.

Stephanie Schriock, the president of Emily’s List, a national group devoted to electing female candidates, said that before the 2016 presidential election, nearly 1,000 women had reached out to the List, wanting to get more engaged in politics, maybe even to run for office. More recently, she said, the number has skyrocketed to over 22,000. “We have never seen anything like what we have seen over the last 12 months,” Ms. Schriock told NPR.

By actually turning out in large numbers, not by falsely claiming big crowds, women are rebuking Trump’s assertions. Many critics wondered if such intensity could be sustained. And perhaps it would have waned, if Donald Trump had not kept throwing logs on the fire. His anti-PC attacks on women continued unabated. Shortly before the midterms, the President derided Dr. Christine Blasey Ford, who had accused his Supreme Court nominee, Brett Kavanaugh, of sexual assault. Imitating Dr. Ford at a campaign rally, he kept saying “I don’t know” and “I don’t remember,” in a mocking tone. He added, again in what was supposed to be her voice, “I only had one beer!,” mocking her testimony before the Senate Judiciary Committee. Upping his anti-PC rants, he has compared women to “dogs,” “pigs” and “horses”  when commenting on their looks or weight.

“This rhetoric is the kind of thing that has turned off college-educated Republican women who voted for Trump in 2016, but have fallen away,” says Debbie Walsh, the director of the Center for American Women and Politics at Rutgers University in her recent interview with the New York Times. She called the President’s remarks  “adolescent,” adding, “you cannot continue to be a party in power if the voters that you are appealing to are white men over the age of 60.”

Did Trump expect to ignite the firestorm of women who came gunning for him? Probably not. Surely he must have been startled by the way they took a page out of his own playbook, letting the chips (and the insults) fall where they may. Ayanna Pressley, the new congresswoman from Massachusetts, used words as weapons, Trump style: “Our president is a racist, misogynistic, truly empathy-bankrupt man… change is coming and the future belongs to all of us.”

Whether marching, voting en masse, or running for office, women are succeeding at using Donald Trump’s combative tactics to proclaim their own authenticity. Will the trend continue as the 2020 race heads our way? According to the Center for American Women and Politics at Rutgers, women were angered by Trump’s election and “are now even more driven to get involved after the flood of sexual harassment allegations against powerful men.”

About the authors: Dr. Rosalind C. Barnett is an award-winning psychologist who has directed major research projects for federal agencies and the Alfred P. Sloan Foundation, among others. Caryl Rivers is a professor of journalism at Boston University and is a recipient of a Lifetime Achievement Award from the Society of Professional Journalists. They are the authors of “The New Soft War on Women” (Tarcher/Penguin) as well as six other books on women, men and society.

One thought on “When Bullying Backfires”