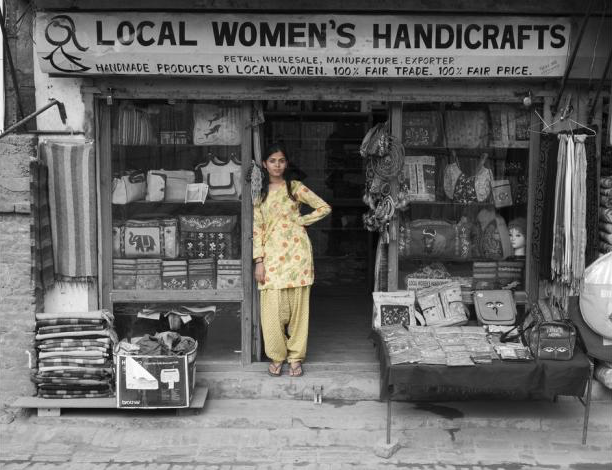 “From the moment of my birth in a southern Nepal border village, I was taught that my existence was unremarkable. Growing up I witnessed so many atrocities against women that, by age 9 or 10, my life seemed destined for the same oppressive path. I worked 15 hours per day in a Nepali sweatshop as a child laborer, receiving less than $2 per grueling shift, and only if I completed the hundreds of garments demanded of me. I ate, slept and toiled in my prison-cell sized sweatshop workstation, too afraid to even look out the window. By about age 21, my family had arranged a forced marriage for me. But through the help of a kind stranger who taught me to read and seize my destiny, I escaped the sweatshop and forced marriage.” —-Nasreen Sheikh

Nasreen Sheikh does not know her birthday or her exact age. That is because in her native southern Nepal border village, girls’ births are not recorded in any official record. “From the moment of her birth, society tells the rural girl child that her existence is unremarkable,” Nasreen says. “If one’s own birth does not matter, then the conditions in which she lives, works, strives, suffers and dies also do not matter.” These words served as the opening to Nasreen’s presentation at the Women Deliver Global Conference earlier this month, where over 8,000 world leaders, influencers, advocates, academics, activists, and journalists flocked to Vancouver to hear about the risks, challenges and triumphs of numerous women and girls, all working to create a gender equal world.

For Nasreen, who was determined to empower disadvantaged women, she did so by launching the Local Women’s Handicrafts, a fair trade sewing collective based in Kathmandu, Nepal. LWH is a social enterprise that empowers and educates disadvantaged women by providing a paid training program in design, sewing, weaving, embroidery, knitting, jewelry making and pattern work. To date, LWH has trained hundreds of Nepali women – many of whom escaped forced and abusive marriages, and all of whom are determined to escape poverty.

Nasreen’s seamstresses and artisans sew beautiful handicrafts each day and, in the process, sew the pieces of themselves back together as well. She has also launched a powerful public health and education initiative by making and giving away hundreds of biodegradable antibacterial sanitary pads to rural women and girls who cannot afford basic hygienic supplies. She also leads body image and women’s health workshops in cramped rural schools and villages for those who often suffer in silence and stigma.

Nasreen shatters everything anyone believes about the limitations of women, child laborers, fair trade, or even your environmentally irresponsible plastic water bottle. Although only 10 years ago, Nasreen could barely read or write, she is now giving talks around the world about her work and the plight of child laborers and survivors of forced marriage for such international conferences as the Foreign Trade Association (Brussels), Google (America), women’s conferences, dozen of universities and recently gave a TEDx talk.

“I envision a world where women are leaders in their communities, they are in control of their own lives, their own rights, and their own decisions.” – Nasreen