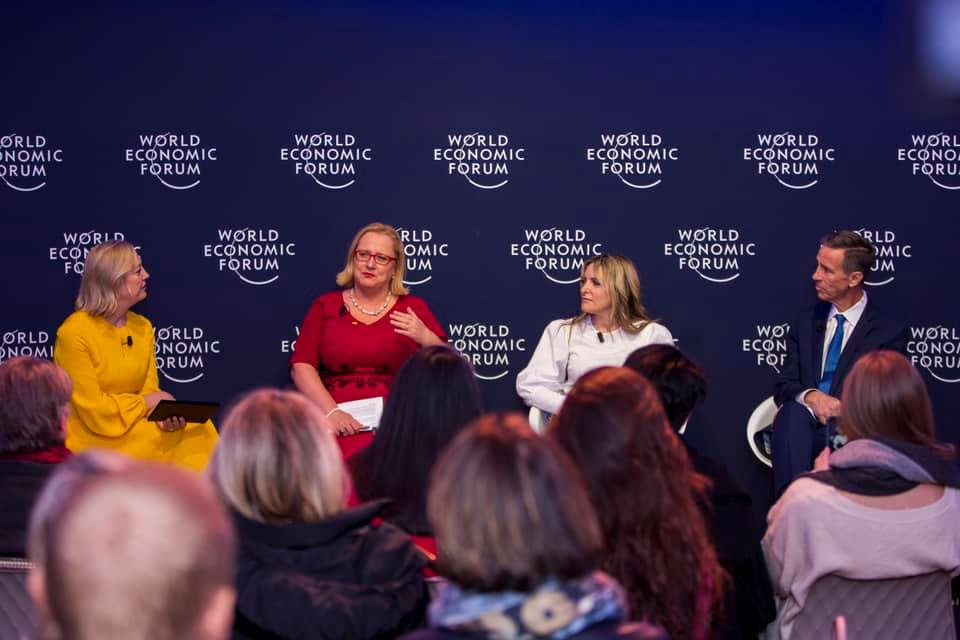 Katja Iversen (in red) speaks at the World Economic Forum in Davos.

I’ll admit, I was feeling more skeptical than usual when planning our presence at the World Economic Forum’s annual meeting in Davos this year. It would be WEF’s 50th anniversary and my fifth time there, and it was initially hard to see our core issues — gender equality, and the health and rights of girls and women — substantially reflected on the formal WEF agenda. In addition, space for civil society organizations, including those working on gender issues, seemed limited due to the many heads of states and corporations arriving for the anniversary.

But off we went with heavy boots; gender lenses in the hand; facts, figures, and tested arguments in the bag; and a calendar full of events and meetings that got even more packed as the week progressed.

Coming down the Davos mountain after five days of working the floors, speaking from the podiums, and having both fly-bys at receptions and events, as well as substantive sit-downs and late night huddles with current and future partners, politicians and CEOs, inspiring young leaders and other agents of change, I am tired but definitely more hopeful than when we came up. Yes, the world is still on fire, and yes, there is a long way to go before we are on a proper path to sustainability, but there is also room for hope, and some good predictors that 2020 will be a super year of action both in regards to conservation and climate change, as well as gender equality and #GenerationEquality.

Here are some of my key points and takeaways:

Through it all, we and many others relentlessly urged participants to use their power for good, and take bigger and bolder action for girls, women, health and equality. And we did see companies and investors step up, speak up, and commit to hardwiring gender equality in the future of work. Even more brought the gender lens down the Davos mountain to apply it to their businesses, governments, and organizations — today, tomorrow, and always.

While of course more could have been done, and a lot more needs to be done, it was a good kickoff to the Decade of Action for the Sustainable Development Goals and 2020 — the ‘Super Year’ for gender equality — where we will mark the 25th anniversary of the Beijing Declaration with the big Generation Equality push.

About the Author: Katja Iversen is the President/CEO of Women Deliver.