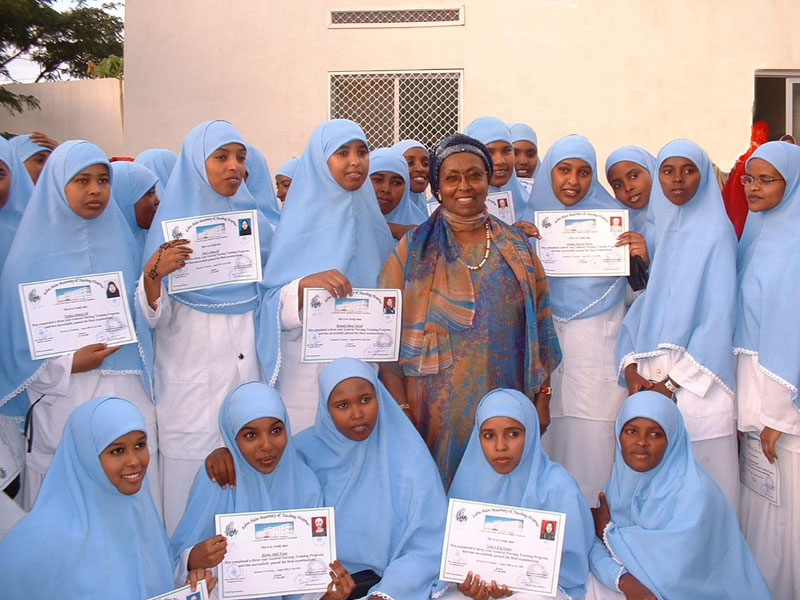 Can women save the world? By looking at the life Edna Adan Ismail, Somaliland’s former Foreign Minister and former First Lady, the answer would be a resounding, “YES.” Labeled the ‘Muslim Mother Teresa,’ Edna has taken everything she learned through these prominent positions to save the lives of untold numbers of women and children.

As the current director and founder of the Edna Adan Maternity Hospital in Hargeisa, her mission is to help improve the health of the local inhabitants and, even more urgently, to decrease Somaliland’s extreme levels of maternal and infant mortality, which are among the highest in the world. This non-profit making charity and midwifery teaching hospital, which Edna built from scratch, is also training student nurses and other health professionals. “I am just doing what needs to be done,” Edna says, reflecting on her decision in 1998 to sell her home and car, as well as donate her U.N. pension, to fund the hospital.

Officially opened on March 9, 2002, the Edna Adan Maternity Hospital was built on land donated to her by the regional government at a site formerly used as a garbage dump. The region lacked trained midwives/nurses to staff the hospital – as most had either fled the country or been killed during the Somali Civil War, which destroyed Somaliland’s entire health infrastructure. Edna recruited more than 30 candidates and began training them while the hospital was still under construction. Now completed, it houses two operating rooms, a laboratory, a library, a computer center and a university dedicated to training nurses and midwives as well as other health professionals. As of 2018, the university hospital has grown to 200 staff members and 1500 students. “Due to our training, our country now has the largest number of midwives per capita, and we have been able to reduce infant mortality significantly,” Edna says proudly. The hospital’s historical survival rate is 75% higher than the national average.

This facility is also the address where Edna calls home, having moved into the only room that had a door and a shower/toilet during construction. “I was born into this,” she says, recalling that, as a child, “the problems of the world came to my father’s door.” Edna witnessed her father, a prominent physician, display compassion, generosity and devotion to his patients throughout her childhood. “His patients came before his own needs,” she recalls. “I brought this level of dedication to my diplomatic career, and now to this hospital.”

The first woman Minister of Social Affairs (August 2002 – June 2003), Edna then became Foreign Minister, and found she was able to more powerfully present the case for supporting Somaliland not only as a diplomat, but as a woman. “Being a woman, I am allowed to be forceful and angry and show sorrow for my people. I am allowed to express pain and sorrow and anger. I can be motherly and I can be tenacious. I can also shed a tear or two,” Edna adds. “I can also share emotions I feel by witnessing the pain and Injustice my country has suffered.” Further, as the Foreign Minister of Somaliland, Edna purposely hosts delegations at the hospital. “I do this so that I can prove to everyone that if this site is good enough for my patients, it is also good enough for me to live in, and it is also good enough for those who wish to associate with me.” As the only woman in the delegation, she has also had to remind other dignitaries that she is the head of the delegation. “If I bang on a table or shed a tear, don’t try to appease me, I tell them. When I express anger, don’t tell me to cool down,’ she continues. “Don’t try to impose a different emotion to what I am expressing at that moment. I will know when I want to cool down, and I will tell you what I need. If I wish to show my emotions, it is because I have chosen to do so.”

Yet one of the most memorable stories she tells is of an experience that occurs time and time again, and often just before a woman is about to die. “Since a woman in our society does not have the authority to sign for her own surgery when requiring a Caesarean section, she must have a male (father, husband, brother or son) do it for her. Sometimes, when we tell the husband that we must have his consent immediately (because of a time-sensitive emergency) or his wife will die, he will refuse, or will want to wait to decide. But we cannot afford to wait. So I summon a policeman, and on the back of the form I write, ‘I want my wife to die, ‘ when she is in danger of dying without the  surgical intervention that she needs. I then ask him if he wants to sign that instead. The husband approves the surgery for a C-section every single time. If not,” Edna adds, “I would have taken the risk and signed it myself, which could cause me to go to prison if his wife did not survive the surgery. Fortunately, no one has ever called my bluff.”

Yet it doesn’t stop there. “My battle against female genital mutilation (FGM) has been the biggest battle of my life,” Edna says. A victim of FGM herself, she was the first woman to speak out against it. “These young girls have survived measles, whooping cough, chronic diarrhea and other life-threatening diseases, and when they reach the age of seven or eight, when they are learning to jump and learn and talk…they are subjected to FGM.” “It is not only cutting. It is total mutilation!” she adds. Edna believes that fathers have to be educated about the dangers of FGM as well, so she is working on publishing an animated book about it since so many in her country cannot read.

Based upon so many of Edna’s accomplishments, one would think there wouldn’t be anything she could fail at. But there is. “I want to get my country internationally recognized. That is my unfinished book,” she says. “The world is losing the presence of a democratic country in Somaliland.  We have managed to demobilize our militia with our own resources, we have a functioning, democratically elected government and we generate all taxes from our own country. While the international community is spending billions of dollars to try to bring peace in Somalia, they are ignoring the peace we have already achieved in Somaliland. We gain from peace and stability,” she adds, “They gain from lawlessness.”

About the author: Lori Sokol, PhD, is Executive Director and Editor-in-Chief of Women’s eNews. Her book, #SheIsMe: How Women Can Save The World, will be published in the Spring, 2020.