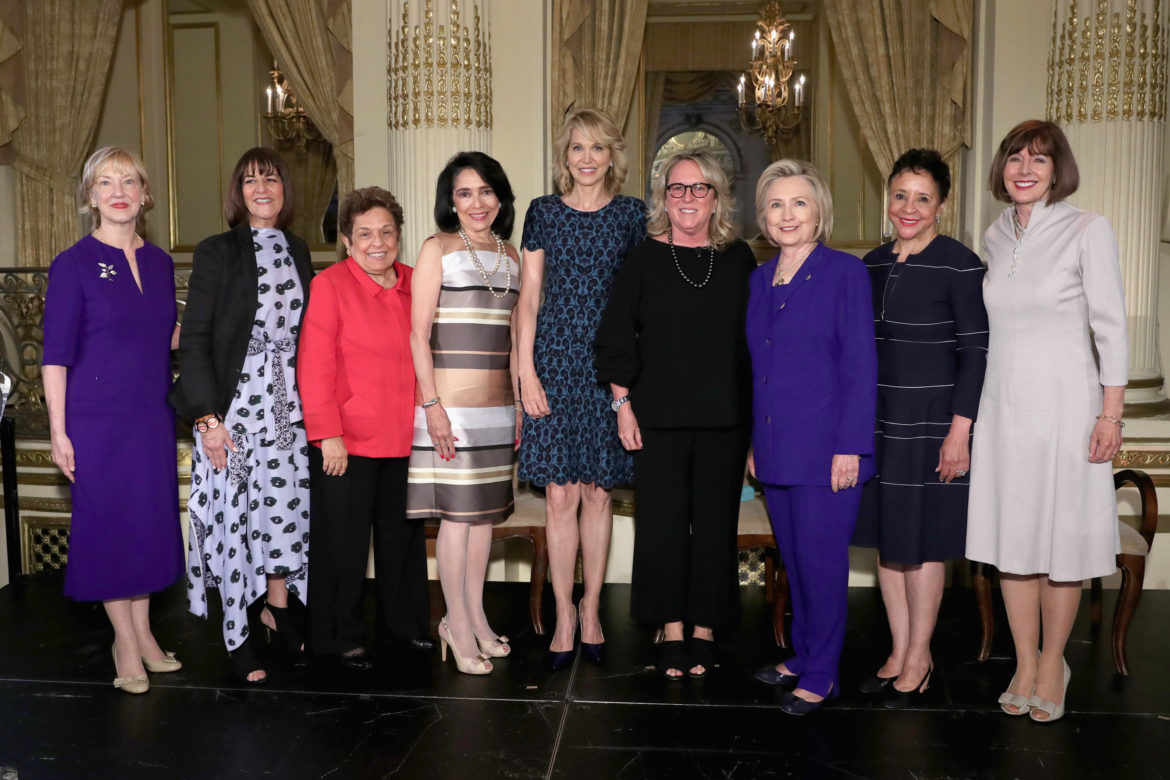 Hailed as ‘the women’s answer to the old boys’ network, The Women’s Forum of New York hosted the 8th Annual Elly Awards Luncheon benefiting The Education Fund of the Women’s Forum on Monday, June 18th at The Plaza Hotel in New York City. The annual awards, named for the Women’s Forum founder Elinor Guggenheimer, has helped over 240 women, ages 35 and over, whose lives have been disrupted by extreme adversity, complete their college degrees. 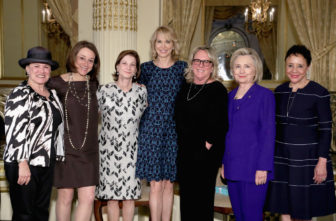 “As a groundbreaking forum for women, this year we’re especially thrilled to honor Secretary Hillary Rodham Clinton, Sheila C. Johnson, and Deirdre Quinn, women who have also broken a lot of ground on their own, and in so many ways,” says Ilene Wachs, President, The Education Fund of the Women’s Forum.  Marcy Syms, Former Chairman and CEO of Syms Corporation, who served as Chair of the 2018 Elly Awards, concurs, “Having Secretary Clinton as our luminary honoree was meaningful and significant, since Hillary was  a friend and colleague of Elly’s during the formative years of the Women’s Forum of New York.”

The Education Fund provides an excellent way to ‘give back’ – helping women age 35 and over whose lives have been disrupted by extreme adversity complete their education and get their lives back on track. “We hope we inspire them, because their dreams, drive, and determination certainly inspire us!” says Linda A. Willett, President of the Women’s Forum of New York.

And so they do. For example, Tamila Pashaee, a 2016 fellow, was born into a culture that did not value education for women. Still living in Iran at age 19, she was placed into an arranged marriage. After thirteen years of abuse, she achieved the almost impossible in her country — a divorce, which unfortunately also meant losing custody of her son. But she knew if she were ever going to create a successful life for herself, she would need to ultimately pursue her childhood dream of getting an education in the U.S.  Although torn and guilt-ridden over leaving her son, she enrolled at Harold Washington College in Chicago. Graduating two years later as its Valedictorian, Tamila’s next goal was to earn a Bachelor of Arts Degree in Economics which she did in Spring 2018.  Next, Tamila is going to Stanford University for graduate studies in International Education and envisions earning a PhD. “I understand that there is more in life than the pursuit of my personal accomplishments. My experiences growing up and living in Iran have helped me to formulate my goal to be an economist to help others both domestically and internationally achieve economic security …It is never too late to start again,” Tamila says.

A 2012 Fellow, Shante Morales’ pursuit of a degree in Criminology has taken a long, tortured path. Through a very early marriage she produced a son and two adopted daughters, requiring her to take a lot of time off to deal with the medical issues/needs of her children. Still determined to achieve her goals, she graduated from college with honors and went on to proudly earn her law degree and is currently studying for the NY bar.  Her vision is to work with the children of offenders, their caregivers, and the offenders upon their release. “The past few years have been difficult, but I wouldn’t change it because it not only made me stronger,” Shante says. “It also created a greater sense of purpose and made me more determined to achieve my goals.”

Tamila and Shante represent just two examples of the 244 women who have received awards over the past 31 years.  The Women’s Forum can boast 100% giving by its members, and on July 1 announced 20 winners of the 2018 awards of $10,000 each.

“Thirty-one years ago, the Education Fund embarked on a mission to help women who had overcome devastating hardships in their lives realize their dream of a college education. Since then, we are proud to have given over $1.6 million in financial awards to over 240 women to help them return to school, earn their degree, and take their place in the professional work world. Our financial awards have transformed their lives, influenced their families, and improved communities,” added Wachs.

About the Women’s Forum of New York:

The Women’s Forum of New York is the city’s premier organization of women leaders. The invitation-only membership of more than 500 women represents the highest levels of achievement across all professional sectors from finance to fine arts. Started in 1974, it is the founding flagship of the International Women’s Forum, a global organization of 6,800 dynamic women leaders in 33 countries and 74 Forums around the world. The Education Fund is the educational and charitable arm of The Women’s Forum of New York, established under a separate corporate governance as a 501(c) 3 tax-deductible organization. Since 1987, the Fund has provided financial awards to women 35 and over who have demonstrated high potential and faced extreme adversity. These women fall outside the scope of most traditional scholarship programs and these awards help them complete their education and get their careers and lives back on track. Funding is provided by100% member donation and an annual fundraising event, The Elly Awards Luncheon, which honors outstanding women leaders and this year raised over $350,000 for its Education Fund.