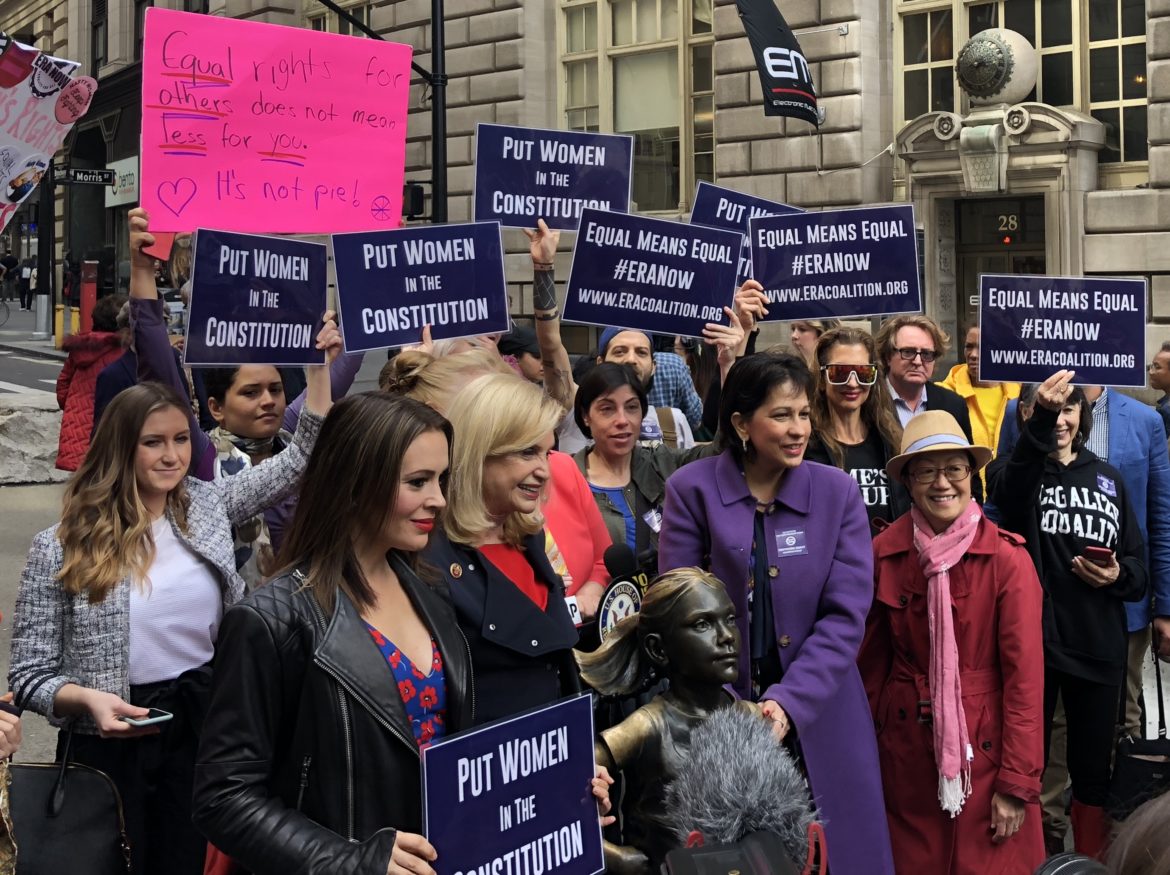 On Monday, June 4th, women, men, children, and families from around the world rallied at the Fearless Girl statue on Wall Street for what Congresswoman Carolyn B. Maloney called, “A new era for the Equal Rights Amendment.” The statue, located across from the Charging Bull, drew the attention of locals and tourists alike as attendees stood behind it, holding signs that read “PUT WOMEN IN THE CONSTITUTION” and “EQUAL MEANS EQUAL #ERANOW.”

Joined by Carol Robles-Román, Co-President and CEO of the ERA Coalition, and actress and activist, Alyssa Milano, Rep. Maloney called for the ratification of the Equal Rights Amendment, which would guarantee equal constitutional rights to all persons regardless of their gender. Robles-Román also declared that the Amendment represents the ERA Coalition’s primary gender justice issue. Surrounded by democratic officials, including District 76 Assembly Member Rebecca Seawright and Manhattan Borough President Gale Brewer, in addition to Rep. Maloney, she also assured the crowd of the ERA’s bipartisan agenda, since sexual harassment and discrimination remain issues in the lives of all women and girls today, regardless of political party. “There is wind at our backs,” Rep. Maloney said, resulting from the #MeToo movement, the 2017 Women’s March, and the recent increase in women running for, and winning, their campaigns for elected office.

Monday’s rally does not stand alone in the history of Equal Rights Amendment advocacy. In fact, Rep. Maloney has reintroduced the ERA 11 previous times. According to the ERA Coalition’s website, women’s rights activists have been calling for ratification of the Amendment for nearly 100 years, since Alice Paul introduced its first iteration in 1923. Still, only 37 of 38 required states have ever ratified it.

Where will the wind of women’s empowerment blow next? These officials and activists are hoping the United States Constitution, but with one state short, only time will tell.

About the author: Christina Saint Louis is a 2018 Rita Henley Jensen journalism fellow.

2 thoughts on “In Case You Missed It: A New Era for the ERA”