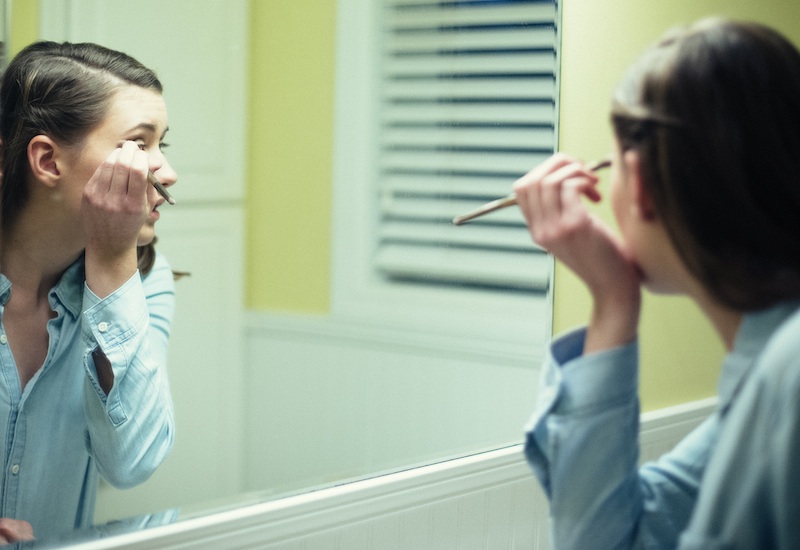 NEW YORK (WOMENSENEWS)—Stephanie St. Vincent, a 17-year-old New York high schooler, grew up in household full of natural foods and organic ingredients. This has influenced how she shops for makeup.

“I used to go out with my friends to Sephora and all these other makeup stores and whenever I would get home, my mom would read the label, look up what the ingredients were and if they were chemically made, she would make me return it,” said St. Vincent.

Despite being embarrassed at the time, St. Vincent recently said in an interview that she knows her mother was looking out for the safety of her skin. “Many of the girls I go to school with don’t even realize the damage the chemicals in their makeup are going to do to them down the line.”

St. Vincent only buys the bareMinerals brand of makeup. She wishes there was an easy way to figure out the safety of beauty products. To that end, the nonprofit advocacy group Environmental Working Group maintains a database of 61,500 cosmetics, ranking them based on the safety of their ingredients.

Like St. Vincent and her mother, in recent years many consumers have called for more naturally made products. The market for organic personal care products is expected to reach nearly $16 billion by 2020, nearly double what it was three years ago.

While demand for these products is on the rise and teens like St. Vincent are aware of what they’re putting on their skin, not all teens are as safety conscious. Paying attention to ingredients at this age may be more important though. While plenty of teens don’t wear any makeup, there is some evidence that teens use more personal care products on a daily basis than adult women and that teens have a heightened susceptibility to any possible toxins they may contain.

The importance of using safety products was underscored by a recent study of 100 girls who, by switching products, managed to drastically lower their exposure to four ingredients that research has identified as potentially dangerous.

However, knowing what is a safe or an unsafe ingredient can be confusing since the European Union and the U.S. have different standards. “The EU law bans 1,328 chemicals from cosmetics that are known or suspected to cause cancer, genetic mutation, reproductive harm or birth defects. In comparison, the U.S. FDA has only banned or restricted 11 chemicals from cosmetics,” reports the Campaign for Safe Cosmetics.

Members of Congress are trying to make cosmetics safer. In 2015 Rep. Peter Sessions, R-Texas, introduced an amendment to regulate health and beauty products; it was referred to committee and has been there since November. A similar bill was stalled in committee in 2013.

In interviews with 10 teen girls, Teen Voices found about half knew about the potential harms, while the rest didn’t pay attention to the ingredient lists on their beauty regime.

“I just go for what I think will suit my skin the best and looks pretty to me,” Jessenia Polanco, a teen in New York City, said in an interview at a city park. “I don’t really care to read what is in the product, but after seeing how everyone wants more natural makeup, I am tempted to look up some of the ingredients before I buy it.”

But some girls are paying close attention. High school freshman Jasmine Rodriguez, who lives in Tampa, Florida, started using products with fewer and easier-to-pronounce ingredients after she had a bad reaction to a moisturizer her cousin bought her.

“My skin started breaking out within the span of 10 minutes. I thought that maybe my skin was just breaking out out of nowhere, but my mom figured that I was allergic to one of the preservatives in the product. She couldn’t tell for sure as most doctors can only test for allergies to food preservatives,” she said.

Since then Rodriguez said she looks more closely at the ingredients list on lotions and other products before buying them. She especially tries to avoid products with fragrances, as she said that aggravates her skin. She hasn’t had a bad skin reaction since she started reading ingredient labels.

In an environmental class in school, Addy Wilson, 16, learned about parabens, a common chemical found in toothpaste and food that the Food and Drug Administration considers a safe preservative. But now that Wilson knows that the ingredient can be found in gasoline, she feels funny about it.

“Most people in my class do not realize the importance, but I can no longer pick up a bottle of eyeliner or mascara without looking at the ingredients,” she said. “A lot of my friends just think that I am paranoid, but they don’t see the importance of taking control of what we allow our body to take in.”

She also said that the issue with cosmetic ingredients entering the waterway freaks her out, but she feels even with filtering our water, we would all still get a taste of the poisonous products. She just tries to not think too much of it, but hopes that one day scientists will find a solution.

Once Zhanya Myers, a junior at the Urban Assembly School for Law and Justice, found out about reports of potential health risks of makeup from a reporter, she said she would start reading labels more closely.

“I currently do not pay much attention, but now knowing that the same chemicals in gasoline are going on my lashes, I will definitely look more into it,” she said in an interview at the Brooklyn, New York, high school. “People need to be aware of what they are trading in for their health.”

Kimberly De La Cruz came to the U.S. from the Dominican Republic when she was 3 years old. She is the chief editor of her high school newspaper and hopes to go into medicine in the future.