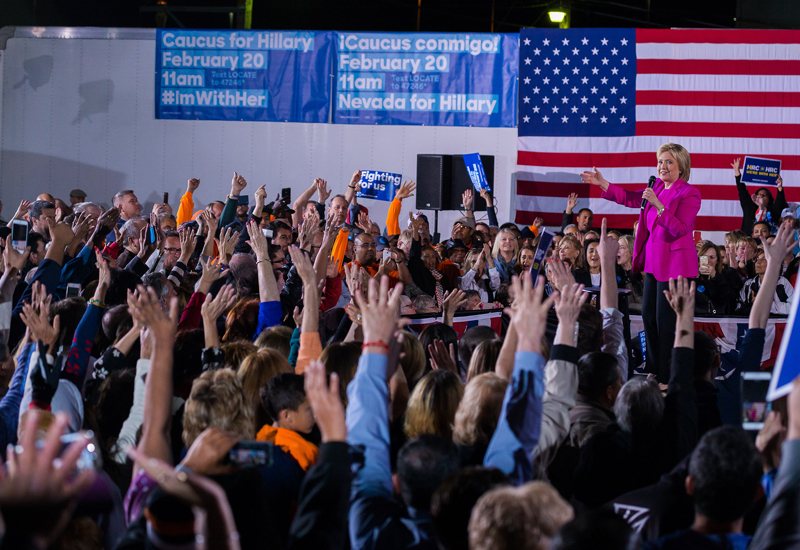 With the caucuses fast approaching on Feb. 20, Hillary Clinton and Bernie Sanders are focusing their campaigns on issues that impact families, health and communities of color.

(WOMENSENEWS)—In the lead up to the Nevada caucuses tomorrow, the campaigns of Vermont Sen. Bernie Sanders and former Secretary of State Hillary Clinton are highlighting reproductive rights, paid family leave and child care, issues that are likely to play an important role in how caucus attendees choose to align themselves.

Seventy-two percent of likely caucus-goers in Nevada want the next president to implement affordable child care, equal pay and paid family leave policies in order to improve the economic security of families, according to The Center for American Progress.

Since Nevada is a more racially diverse state than Iowa and New Hampshire, Clinton and Sanders are also making sure to discuss immigration and systemic racism and are reaching out to voters of color.

In Nevada, South Carolina and subsequent states, these relationships with women, working families and communities of color will be essential for the two Democratic candidates and how they fare among voters.

A recent CNN/ORC poll shows the two are in a virtual tie among likely caucus attendees.

However, Sanders has said that he would be a better president for women. The senator received some backlash after saying that Planned Parenthood was part of the establishment, and conceded that he had poorly worded his statement, vowing to expand funding for the organization if elected.

Although Clinton has been struggling to attract the support of millennial women, she has been consistently performing better than Sanders among voters of color. Recently, her campaign has been trying to reconcile this discrepancy by reaching out to young Latina immigrants in Nevada. Initiatives like her campaign’s Mujeres in Politics, in which Latinas host small gatherings to discuss politics and call Spanish-speaking women in other key states, is one way she’s engaging more Latinas. Latino voters make up approximately 17 percent of Nevada’s Democratic caucus electorate, according to the Pew Research Center.

Clinton has also unexpectedly received the support of a group of sex workers in Nevada who call themselves “Hookers for Hillary.” One of them, Entice Love of Sacramento, told CBS News she supports Clinton because she believes the candidate is a role model who empowers women. Love said many of her fellow sex workers plan to caucus for Clinton.

Sanders’ senior adviser, Tad Devine, said the reason the senator has surged to a virtual tie with Clinton in Nevada has had a great deal to do with support from Latino voters. But, as former Ohio State Sen. Nina Turner pointed out, “black women are vitally important” as well.

Turner, who has been working on black voter outreach for Sanders’ campaign, is right — women were the largest voting bloc in 2012, and women of color played a significant part in President Barack Obama’s reelection. In 2008, 30 percent of the Democratic electorate in Nevada was black or Hispanic, and 55 percent of the Democratic electorate in South Carolina was black.

On Feb. 18, just two days before the Nevada caucus, the nonpartisan Clark County Black Caucus — which is based in Nevada’s largest county — announced its endorsement of Sanders. This came one week after the Congressional Black Caucus PAC’s decision to endorse Clinton.

Although Clinton has been described as having a “firewall” in the South she will have to fight to maintain it, because a recent Fox News poll indicates that although Clinton maintains a lead in South Carolina, she has fallen behind Sanders for the first time nationally.

‘Neerja’ is Gripping Tribute to Heroine of 1986 Hijacking

In Flint, Pregnant Women Must Be Worrying