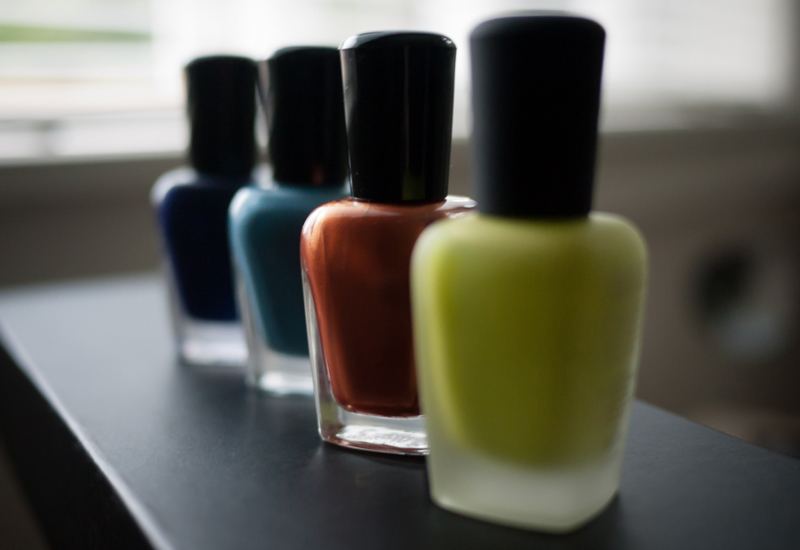 (WOMENSENEWS)–It’s not uncommon for Lizzy Klein to paint her fingernails, always the four fingers on her right hand, with different colors five or six times a day. Sometimes she’ll apply three colors in 30 minutes. On busy days she may change her polish 20 times.

It’s all part of the testing she does for the phone app she founded, SuperDuper, which was released earlier this year and helps users find drugstore versions of high-end-brand nail polish colors.

But that constant polishing, according to a study published Monday in Environment International, may expose Klein to a potentially hazardous chemical. Triphenyl phosphate, or TPHP, is commonly used to make plastics and as a fire retardant in foam furniture, but is also widely found in nail polishes.

Since the dangers of TPHP still aren’t well understood though, the finding doesn’t have Klein panicked just yet. “The way nail polish smells it can’t be a healthy thing,” said Klein. “My immediate reaction was that’s scary, but my next thought was more analytical: is it really bad for me or not?”

The study, by researchers at Duke University and the Environmental Working Group, a nonprofit based in Washington, D.C., found evidence of TPHP in all 26 women who participated 10 to 14 hours after they painted their nails.

This study “shows that nail polish may be an important source of short-term exposure to TPHP and for people who use nail polish more frequently there may be chronic exposure,” said Johanna Congleton, a senior scientist at theEnvironmental Working Group.

It’s estimated that women paint their nails about once a week on average, according to the study, but for now researchers said it’s too early to know if the TPHP in nail polish poses any health risks.

“Little research has been done on the potential for human exposure to this chemical and related health effects,” said John Meeker, a professor of environmental health sciences and associate dean for research at the University of Michigan School of Public Health. “It’s likely too early to say that it’s a major risk. However, given the suggestion of possible adverse health effects some caution may be warranted.”

There is growing evidence that TPHP, likely added to nail polish to increase its flexibility and durability, could affect hormones, metabolism (including weight gain), reproduction and development. In one of the few studies looking at this chemical in humans, Meeker and his colleagues found an association between exposure to TPHP and decreased sperm quality in men. Most studies of TPHP have examined its effects on cells and animals.

“Several studies have made us question if this [TPHP] is a good choice as a plasticizer in nail polish,” Heather Stapleton, an associate professor at the Nicholas School of the Environment at Duke University who led the research team that conducted the study, told Women’s eNews.

While there’s been recent media attention on the working conditions and health hazards of nail salon workers, authors of this recent study and its accompanying report, “Nailed: Endocrine Disruptor In Nail Polishes Gets Into Women’s Bodies,” said this is the first look at human exposure to TPHP in nail polish.

Of the more than 3,000 nail products in the Environmental Working Group’s Skin Deep cosmetic database, about half list TPHP on their ingredient labels, including such popular brands as Sally Hansen,Essie, OPI, Revlon and Wet N Wild. However, the actual number may be higher, since the study found that some polishes don’t disclose the chemical. Of the 10 nail polishes tested, eight had measurable levels of TPHP, including two that didn’t list it as an ingredient. Clear polishes generally contained more TPHP than colored polishes.

The results also suggested, to researchers’ surprise, that participants absorbed TPHP mainly through their skin, not by inhaling it.

TPHP is only one of many chemicals found in nail polish. Some nail polish companies have begun to voluntarily remove certain chemicals that may have health and safety concerns. “Three-free” polishes, for example, exclude toluene, dibutyl phthalate and formaldehyde, commonly called the “toxic trio.” But a 2012 study by California’s Department of Toxic Substances Control showed that numerous nail care products that displayed toxin-free claims actually contained those chemicals. Of the 25 products in the study, seven said they were free of the toxic trio, but five had detectable levels of them.

While researchers of this recent report recommend reading nail polish labels to make better choices, these studies show that consumers may not be able to avoid chemicals based on product labels. Stapleton, the Duke researcher, said it makes it hard to guide those wanting to buy nail polish. “Some nail polishes may not have TPHP but may have other chemicals,” she said. “It may be beneficial to reduce exposure [to nail polish]…Be careful to apply it to kids and pregnant women until we know the risks.”

The Environmental Working Group report is also calling for greater regulation of the cosmetics industry. Currently, under the federal law, cosmetic products and ingredients– with the exception of color additives– don’t need Food and Drug Administration premarket approval. Chemical manufacturers are also not required to share safety information of their products with the agency before they market them.

“Ingredients in most consumer products don’t have to undergo safety testing, it’s not required,” said the  Environmental Working Group’s Congleton.“In many cases this leaves gaps in the toxicity data of ingredients in cosmetics and consumer products. Sometimes we don’t have the information to make a call on safety. We need better standards in what is required to prove a track record of safety . . . We need regulatory reform to make more informed decisions.”

The Environmental Working Group wants to reform regulations by establishing a stronger safety standard that would require chemical makers to prove that their products posed “reasonable certainty of no harm” before they came to market.

Myra Irizarry Reddy, government affairs director at the Professional Beauty Association, the largest organization of salon professionals in the U.S., said they also favor some oversight. “We do support mandatory FDA authority over ingredients in cosmetics and cosmetic manufacturing,” she said. “We care about our professionals and the impact products have on them in a salon environment every day.”

To get a better sense of the risks of TPHP exposure from nail polish, Duke’s Stapleton said they’re hoping to conduct follow-up studies. While they know from previous studies that women have higher exposure levels to TPHP in general than men, “there’s a lot we don’t know about the effects of this chemical. We need more research.”

Until there are more concrete answers, SuperDuper Founder Klein isn’t planning to change her nail polish routine. Though she said she’d love for her app to eventually also include nontoxic polish alternatives.

“There are a lot of studies. It seems like everything is terrible for us,” she said. “At some point you make your choices. I eat organic but I color my hair. We pick and choose what lifestyle things we’re willing to accommodate.”