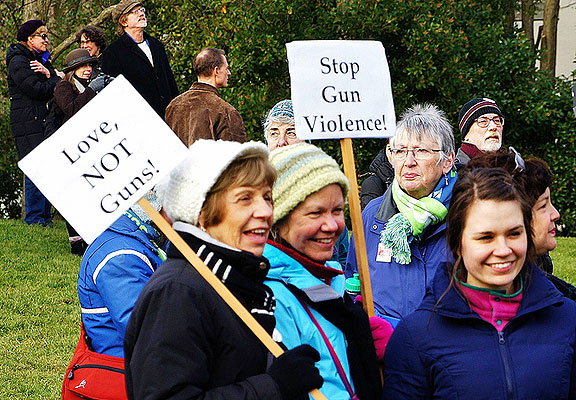 The day still haunts me–from 25 years ago–when my junior high school went into lockdown after a mass shooting at the nearby grade school. Now, after Newtown, women with children are taking responsibility for getting something done.

(WOMENSENEWS)–In the hours after the massacre at Sandy Hook Elementary School in Newtown, Conn., Shannon Watts, a mother of five, founded One Million Moms for Gun Control in Indianapolis.

The group is holding demonstrations in New York City on Jan. 21 and co-sponsoring a march on Washington on Jan. 26 to build momentum for legislation to restrict access to guns.

MomsRising, a national grassroots advocacy based in Seattle, is urging its members to petition Congress and the National Rifle Association to stop blocking common sense gun regulations. The group is also calling on Wal-Mart, based in Bentonville, Ark., and the largest gun dealer in the country, to stop selling assault weapons and high-capacity ammunition magazines. Yesterday its members rallied at the Wal-Mart in Danbury, Conn.–minutes from Sandy Hook Elementary School–to ask the retailer to stop selling such weapons.

Veronique Pozner, a mother of one of Sandy Hook’s slain first-graders, has said she wants to play a part in the discussion about the federal response to the rampage.

Moms, in other words, are speaking out as President Barack Obama and Vice President Joe Biden try to build consensus for a controversial gun-control package that could include a push for background checks for all gun buyers and a ban on assault weapons and high-capacity magazines. Obama is also reportedly considering using the power of his executive office to restrict access to guns.

When mothers speak about slain children, they awaken the primordial parent in all of us, and we are collectively driven to protect our young–at all costs and against all odds.

I’m a mother now, and for me the fear is compounded. I don’t want my own children to go through the kind of mass-shooting ordeal that I did.

Twenty-five years ago in my hometown of Winnetka, Ill., a deranged babysitter opened fire at our local elementary school and shot six first graders, killing one, a little boy named Nicholas Corwin. That day is scorched in my memory. I was in junior high school, and my school was in lockdown until we were told that it was safe to emerge because the murderer–Laurie Dann–had shot herself. (Yes, ours was one of the rare mass shootings by a female, the one that must always be cited as the exception to discussions of how young men, with untreated mental illnesses, are the usual perpetrators of these horrific crimes.)

Obama is calling on us, as a society, to come together to make all our children safer.

“We bear responsibility for every child, because we’re counting on everybody else to help look after ours, that we’re all parents, that they are all our children,” Obama said in a memorial service after the Newtown shooting, wiping away tears throughout the speech. “This is our first task, caring for our children. It’s our first job. If we don’t get that right, we don’t get anything right. That’s how, as a society, we will be judged.”

If history is any guide, mothers’ powerful advocacy role may turn out to be crucial to our national response to Newtown.

Back in 1903, Mary Harris “Mother” Jones, a prominent labor activist, launched the fight for child labor laws with a famous march of “mill children” to the Long Island home of President Teddy Roosevelt.

In the 1980s, Candace Lightner founded Mothers Against Drunk Driving and sparked a national movement that has lowered drunk-driving related fatalities by more than 40 percent, according to the Department of Transportation.

Dennis and Judi Shepard started an organization to combat hate crimes after their son Mathew was beaten and left to die because he was gay.

Jeanne Manford founded Parents, Families and Friends of Lesbians and Gays (PFLAGG) after her openly gay son was beaten and hospitalized; and Cindy Sheehan led the anti-war movement in the last decade after her son was killed in the war in Iraq.

Mothers, of course, have been pushing for gun control for years.

Rep. Carolyn McCarthy, a Democrat from New York whose husband was killed and whose son was severely injured during a shooting on a Long Island commuter train in 1993, won a seat in Congress on the issue and ever since has been the leading voice for gun control in the U.S. Congress.

In 2000, hundreds of thousands of mothers descended on Washington, D.C., to participate in the Million Mom March, which took place about a year after the tragic school shooting at Columbine High School in Colorado.

Now, the bereaved mother Pozner could emerge as a key leader in what happens next.

“As the mother of a 6-year-old victim of a cold-blooded massacre of school children, I am puzzled and disappointed by the fact that I have had no information or opportunity to be heard regarding the upcoming legislative proposal in Washington,” she said in a recent statement.

I have a hunch that if we give moms like Pozner the space to tell their painful stories, people will listen, and act, to prevent more gun violence. I know I will. 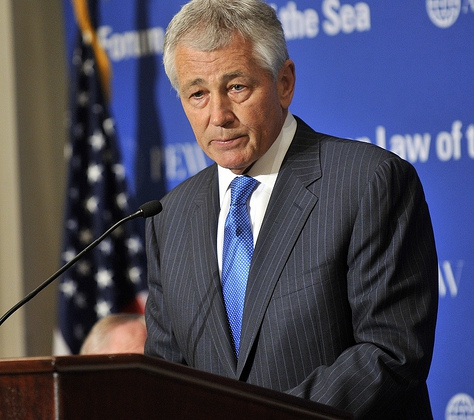