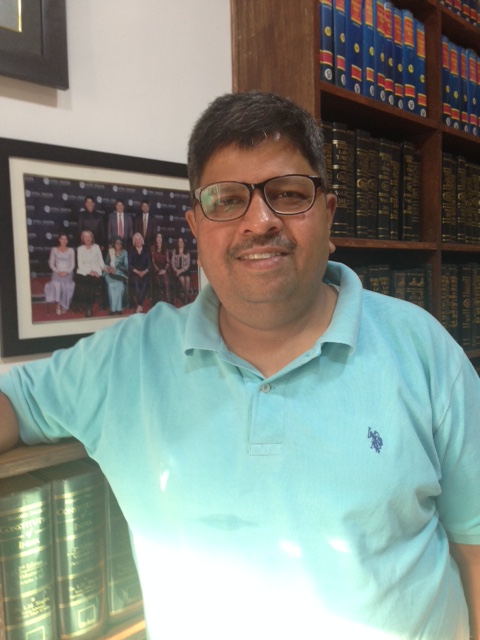 Ravi Kant, eldest of the brothers of Shakti Vahini.

It was a routine visit to the brothel in New Delhi as a part of the awareness drive on HIV/AIDS that changed their lives. Seeing the desperation in the eyes of a terror-stricken 14-year-old girl while they were distributing condoms left them shaken. Realizing that she was there against her will, Ravi, Nishi and Rishi Kant knew they had to rescue the girl.

After they managed to get the girl out, the three brothers realized that they had to channel their outrage at the violence against women in a more organized manner if the brutality of trafficking were to be accurately exposed. Born out of that mission is Shakti Vahini, a non-profit organization created to put an end to men attacking, trafficking, abusing and enslaving women. Beginning with just one state 17 years ago, it is now working in 13 states and has rescued over 6,000 female victims from physical and sexual abuse, trafficking, honor killings and forced marriages.

According to a recent report by the UN Office for Drugs and Crime, South Asia, with India at its centre, is the fastest-growing and second-largest region for human trafficking in the world, after East Asia. The Indian state of Assam had 1,494 cases of human trafficking, the highest number in 2015, according to the latest National Crime Records Bureau.

“We were horrified by the violence we saw against the minor girls. In many cases, oxytocin injections were given to make the girls look older and voluptuous. Taught by our parents to always respect and protect women, all three of us decided to set up an organization to combat violence against women. We wanted to become a voice for the unheard and amplify the issues to bring about change,” says 50-yer-old Ravi Kant, eldest of the three brothers and president of Shakti Vahini.

In 2001, when the three brothers began their work, they faced skepticism and even discouragement. “Initially people laughed at us. Here were three men working on women’s issues, especially violence against women. Even women’s groups didn’t take us seriously at first,” Ravi says.

But this didn’t deter them. Neither did threats from pimps, brothel owners and corrupt law enforcement officials. “It is a difficult and risky job to raid a brothel and bring the culprits to court. But we were determined to continue,” says 43-year-old Rishi Kant, youngest of the brothers.

In fact, it was the viciousness of the violence that kept them going. “Crimes against women have a lot of layers of violence- prostitution, forced marriage and slavery. One of the more horrific cases was rescuing an enslaved girl who was a minor, and subjected to severe violence. We found her naked with cut marks all over her body. Her head had a deep wound and was full of maggots. We were horrified, but it also deepened our commitment to end trafficking,” Rishi recounts.

To do so, they adopted a multi-pronged strategy. While their push for rescues led to the arrest of a major trafficker who had allegedly smuggled more than 10,000 minors from rural areas in 2013, simultaneous advocacy efforts with other groups led to changes in Section 370 of the Indian Penal code,  which prohibits slavery and sex trafficking. It also brought about the country’s first comprehensive anti-human trafficking law, introduced in 2016. “Although it is still in the drafting stage, it will hopefully increase prosecution and convictions,” says 47-year-old Nishi, executive director, Shakti Vahini.

“This Bill is necessary since there is a shift in the way these trafficking traps work now,” Rishi adds. “The traffickers get the phone numbers from mobile recharge shops that maintain records of the pre-paid numbers that get recharged. Once the girls leave the shop, the traffickers pay the staffers Rs 500-1000 (USD $7-$10) per phone number.  Traffickers then start shadowing these girls, luring them with promises of jobs and marriage, or taking them to visit Taj Mahal. If the girl agrees, she is placed on Delhi-bound trains, where middlemen pocket approximately Rs 50,000 per girl. The girls are then sold in Delhi, Ghaziabad and Agra brothels for at Rs 2-3 lakh (USD $250-$300),” Rishi says.

As the only NGO run by three brothers, Shakti Vahini’s mission is to also teach boys to respect women. They do so by engaging boys in various gender sensitization programs in schools and colleges, “until every one of them understands the importance of respecting women,” Nishi says. Shakti Vahini has also developed a database of traffickers who have been arrested during their raids and rescue operations. Believing that human trafficking is a form of organized crime, “profiling these traffickers will help us and law enforcement  agencies track them down, since traffickers tend to be involved in many other cases as well,” Nishi points out.

Eradicating violence against women through honor killing is also an important part of Shakti Vahini’s mission. The organization, in fact, has filed several public interest litigations in the Supreme Court to highlight cases where women were publicly paraded naked and branded as witches, which led the Court to require state governments to inform them about the actions being taken to put an end to this. “Many state government officials grumble about this and consider us a nuisance,” Ravid says. “But we are willing to be a nuisance as long as it helps bring justice for women.”

Swapna Majumdar is an independent journalist based in New Delhi and writes on development and gender.