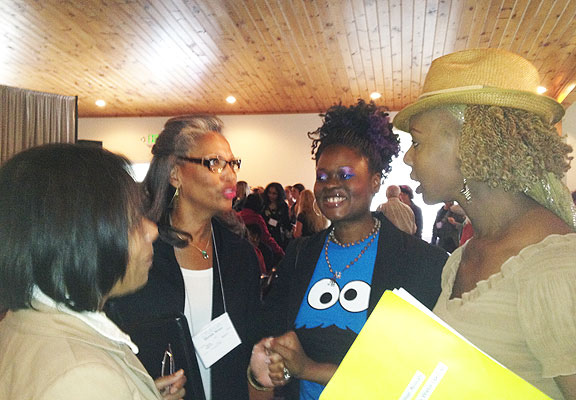 Melissa Harris-Perry writes about black women’s difficulty with a world of alien power structures. Dalila-Johari Paul embraces that insight and takes it further after attending a conference on women and power.

(WOMENSENEWS)– The Bible and I never had much of a connection.

Yet, lately I’ve been singing the praises of Melissa Harris-Perry’s book "Sister Citizen: Shame, Stereotypes and Black Women in America." I quote passages from her book like psalms.

Released in late 2011, it adds to the discussion of how for some of us, politics goes beyond black women’s decisions as voters and as leaders. She makes the case that black women in America have always had to wrestle with assumptions about our character and identity. The struggle to fit in is political in itself and what Perry so evocatively calls "a crooked room."

"When they confront race and gender stereotypes, black women are standing in a crooked room, and they have to figure out which way is up. Bombarded with warped images of their humanity, some black women tilt and bend themselves to fit the distortion," Harris-Perry writes.

Amen to that Ms. Harris-Perry! As a black female journalist, I’ve experienced the difficulty of trying to fit into a newsroom where the male dominant perspective left no real role for me to fit.

But it’s not just black women in America who find themselves stuck in a crooked room. I’ve seen all kinds of women adjusting to their own versions of it. Female veterans in the U.S. who have been sexually assaulted while serving their country are battling a military culture that protects the perpetrator and still blames the victim. Other women are trying to forge places for themselves in male-dominated religious traditions. And some are trying to gain the most basic of legal rights in parts of the world where girls are considered property of husbands and are married off while they are still children.

A recent leadership conference for women that I attended, however, helped me think about how women might straighten up things for ourselves.

The Omega Institute Women’s Leadership Center launched on Sept. 22 with the re-evaluation of power and leadership as one of its goals. Co-founders Elizabeth Lesser, Carla Goldstein and Sarah Peter want to provide a space where girls and women have a chance to collaborate and develop different ways of thinking and leading.

At the core, it involves a shift from the idea of "power over" to "power with others."

The center is as an extension of the Omega Institute, a campus that hosts a variety of wellness and personal-growth retreats. Founded in 1977 in Rhinebeck, N.Y., Omega seeks to provide a spiritual refuge for all comers.

The "women and power" conference I attended took the theme of "what’s possible."

We did not have to merely imagine, we could see the real world possibilities.

On the last day of the conference, for instance, we enjoyed a strong surge of collective excitement as keynote speaker Cecile Richards, president of Planned Parenthood Federation of America, reminded us of the surge in donations after surviving the conflict with the Susan G. Komen Foundation.

Other women provide other examples of transformative leadership.

Amie Kandah of Sierra Leone, featured in the documentary "Half the Sky" broadcast last week on PBS, is helping survivors of sexual violence heal through her work with the International Rescue Committee. Chung Hyun Kyung is a feminist theologian and co-chair of Jo Gak Bo, a peace movement between North and South Korean women that is also cross-generational.

I also say "amen" to the Democratic congresswomen in Michigan who in June recited the Vagina Monologues on the state’s capitol steps as an act of solidarity with Rep. Lisa Brown, D-Mich, who was barred by House Republicans for using the word vagina while arguing against a bill that would restrict abortions after 20 weeks.

Inevitably, the conference led me to reflect on the power issues in my own life.

For years I had been trying to contort myself to fit into what I thought corporate media companies expected of me. It was tough learning how to stand up straight in an environment that seemed designed to keep me on the fringes.

"They" let me perform managerial duties, but never gave me the official title granted to the two men who were younger, less experienced and hired after me. By 31, I realized I wasn’t interested in pleading my case to the all-male jury hanging out in the glass offices. I left that "crooked room" and opted for a life of uncertainty that included advocating for the rights of survivors of rape and domestic violence.

As female leaders, we need to start from an internal, holistic sense of ourselves before we can change our externalities. I extend this task to men as well. How can we sustain effective leadership if we are broken internally?

After leaving newspapers two years ago, I became deeply invested in working with women with post traumatic stress disorder. I wasn’t prepared for the self-defeating toxicity of some fellow advocates, agencies and leaders. I’ve seen all the infighting and ego trips that I thought I’d left behind. The world we all seemed intent on changing invaded us instead.

In my ideal world, female survivors will face their trauma and become leaders in their own lives and start a healthier cycle for younger women to join.

During the Omega conference there were many moments where I whispered "amen" to myself as I found a connection to other women with the same ideal.

Headquarters of the Sylvia Foundation