Saudi women have whiffed new freedoms in recent years. But like the subtle fashion interpretations now being placed on the otherwise identity-smothering, head-to-toe abaya, they don’t go very deep.

RIYADH, Saudi Arabia (WOMENSENEWS)—Women in Saudi Arabia’s largest city look like black ghosts as they populate the shopping malls that dominate this wealthy city. They are covered from head-to-toe with a black veil and a black robe called an abaya. They usually wear a black face-covering called a niqab and sometimes black gloves.

The attire is traditional, sensible for women living in the desert needing protection from the sand and sun. Black, according to a local tour guide, became the color as a result of an abaya salesman promotion about 500 years ago that caught on.

Now, many no longer live in the desert; the abaya’s color absorbs heat and its modern polyester fabric does not breathe. Yet, after the 1979 religious uprisings occurred in Saudi Arabia and Iran, the women’s attire began to be strictly enforced by patrols of religious police, who also monitor women’s public comportment and stop them if they try to drive a car.

One night in early May, I witnessed a trio of police conducting a raid in a mall that is part of a large religious, retail and hotel complex. As is typical, according to Saudis I talked to, the religious police traveled that night with a member of the city’s police force and a “volunteer.”

They found a woman on the second floor, near a popular restaurant, and began to question her as she sat on a bench, covered in black. I could see no reason why they were bothering her and have no way of reporting on the outcome.

The women and men of Saudi Arabia live with constant apprehension of meeting these enforcers of religious dictums, who enforce things such as the requirement that women not only cover their body and face, but every strand of hair, store closings at prayer time, the selling of alcohol and various other features of religious law affecting daily life.

A sanction could be as minor as a loud, embarrassing, reproach, “Cover yourself Madam in the name of God.” But the religious police have the authority to arrest and imprison Saudi residents without charges and they often do. One woman I met claimed her friend had bones broken by the religious police.

One clue that the harsh restrictions on women may be lightening up a bit, however, may be the subtle variations in the abaya that are now appearing in different cities.

While most abayas are an unbroken field of black, a few in ultra-conservative Riyadh are decorated with blue, gold and red embroidery.

In more liberal Jeddah, most have some sort of colorful, more noticeable decorations. Some women are going so far as to wear abayas that are brown and even beige, accompanied by a patterned scarf revealing some hair.

In multiple interviews and briefings, government officials, business leaders, journalists, bloggers and professional women agreed that the small fashion statements that women are making with their abayas reflect the growing belief that King Abdullah bin Abdulaziz Al Saud’s efforts for progress —in the wake of the Egyptian and Tunisian uprisings– and happier days are ahead. Most of these interviews took place as part of the International Reporting Project’s editors’ trip to the oil-rich American ally.

“No one wants a revolution,” said one Saudi woman wearing a brown linen abaya. “Step by step.”

Reflecting the current mood is Laura Bashraheel, in her early 20s and a Saudi reporter for the English-language Saudi Gazette. Touching her brown abaya, she said it is her generation that is leading the change because “black is boring,” adding that the black abaya is uncomfortable in the Saudi heat. Bashraheel even owns a purple abaya.

Fashion trends can move quickly now in Saudi, as can political messages, as Twitter has grown to such popularity that some Saudis claim more than a million followers.

In a nation without a written constitution, King Abdullah’s word is law and his liberalizations reflect a slight shift from the power of the hard religious right. The king, however, is at least 88 years old and those in line to succeed him are said to be conservative. That leaves the landscape here for women as shifting and uncertain as the dunes in the nearby desert.

The black abayas that conceal Saudi women also symbolize the lack of transparency in an inconsistent monarchy.

In January, King Abdullah appointed a new head for the religious police signaling that the religious police might be reined in. Two weeks into his post, the appointee banned volunteers from serving in the commission that enforces the kingdom’s interpretation of Islam. Four months later, the king prohibited the religious police from “harassing people” and threatened “decisive measures against violators.”

Nevertheless, a video made May 23 by a Saudi woman that has gone viral on the Web, shows a member of the religious police in a mall telling her to leave apparently for the infraction of wearing nail polish. She refuses, insisting her nail polish was not his business and that she was taping their encounter. She also called the local police seeking protection. At last report, the police intended to ask higher authorities “to take action against her.”

King Abdullah also loosened some other restraints on women.

In 2009, he established the first mixed-gender university campus in Saudi Arabia. At the King Abdullah University of Science and Technology, the religious police do not operate on-site. Women are allowed to mix freely with men, to drive on campus and they are not required to wear veils in the coeducational classes.

In 2010, King Abdullah initiated a foreign study scholarship program for Saudi citizens and roughly 25 percent of those sent abroad to study are women.

In the summer of 2011, the king announced that women would be able to stand and vote in the 2014 municipal elections.

Throughout the kingdom, however, women continue to face some of the world’s severest strictures.

With the exception of King Abdullah University of Science and Technology, all education is gender-segregated.

One female university professor reported in an interview that she had never met her dean and vice versa. They communicated only by e-mail and telephone.

In 2011, the day after the king announced women’s participation in the 2014 municipal elections, a woman was arrested for driving a car and later sentenced to 10 lashes. The sentence was eventually dropped. Several months later, the king’s religious advisers warned that if women were permitted to drive, it would increase prostitution, pornography, homosexuality and divorce.

In a divorce, Saudi women traditionally—no written family law exists–have custody of their children for the first seven years and then must turn them over to their husband.

At a recent gathering of students in the national medical school, King Abdul Aziz University, female students, several who were bare-headed, took pains to explain that the gender-segregated classes did not create problems for them.

“When we have pediatric rounds, they have OB-GYN rounds,” one said, referring to obstetrical and gynecological hospital care. “And our professors respect us.”

Two of the seven female students present said they intended to become neurosurgeons.

“I think I will have a partnership marriage,” said one.

Rita Henley Jensen is founder and editor in chief of Women’s eNews. She was part of an International Reporting Project delegation of U.S. editors visiting Saudi Arabia.

Would you like to Send Along a Link of This Story?
womensenews.org/story/the-world/120529/saudi-women-test-reins-under-aged-liberal-king 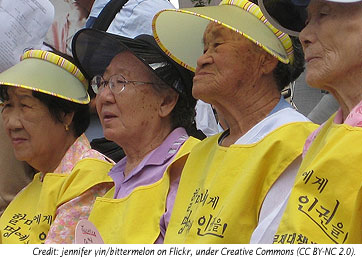