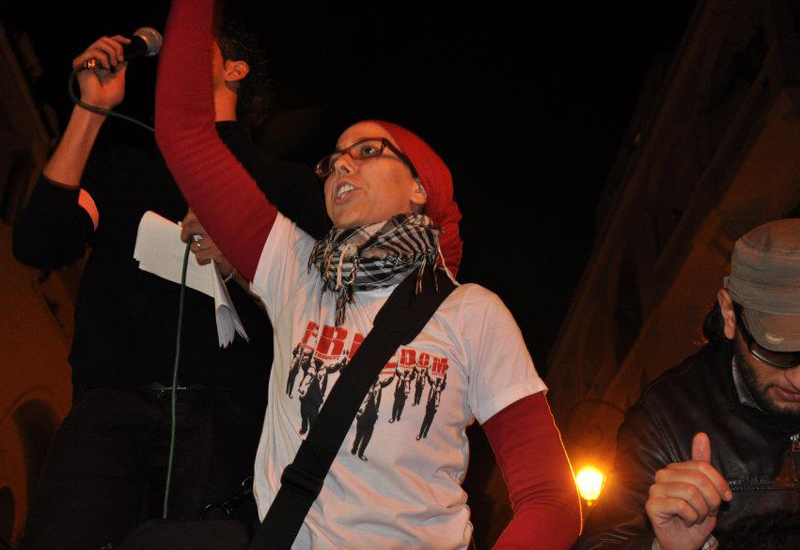 The youth-led Feb. 20 Movement in Morocco has simmered down to a core group that includes many female activists. They’re keeping an eye on constitutional reforms enacted last year that some say didn’t go far enough. “We want real, radical change,” says one.

RABAT, Morocco (WOMENSENEWS)–Zineb Belmkaddem hadn’t ever given much serious thought to political activism. She didn’t believe she could really change things.

Then came the uprisings in nearby Tunisia.

“I was in awe and shocked that young Arab people can actually do something to change the political scene,” said 27-year-old Belmkaddem in a cafe here earlier this month, wearing Ray-Ban sunglasses and a white hijab. “It was impressive. Then it happened again in Egypt and my shocked increased. It was the first time I decided it was worth getting involved.”

The wave of protests sweeping the region soon hit Morocco, and Belmkaddem responded to a YouTube video’s call out for Moroccans to join pro-democracy protests on Feb. 20 last year. Thousands of others from across the country also participated to demand reforms, including checks on the monarch’s power, dignity, social justice, democracy and freedom.

She became part of the core of what’s become known as the February 20 Movement, a mostly youth-based pro-democracy group. While the movement has lost steam since last year, members say it still has presence and potential.

“The February 20 Movement, plus the general protest mood in the region, is making people feel they can speak for their rights,” said Belmkaddem, a single mother who works as an international coordinator for a Netherlands-based research company and also writes for the Moroccan activist website Mamfakinch. “It’s enabling women and people in general to speak for their rights.”

A few hours after talking with Women’s eNews, Belmkaddem headed to a conference in Bouznika, just outside of Rabat, to meet with contemporaries from nine countries, including Tunisia, Egypt, Spain and Syria. The three-day “Meeting of Young People for Democracy in Mediterranean Countries” was organized by the Moroccan Association of Human Rights and ACSUR-Las Segovias, based in Spain.

As young women such as Belmkaddem take a leading role in sustaining the country’s pro-democracy ranks, they may be helping to shift the society’s conservative gender attitudes, said Naima Elgallaf, a human rights lawyer in Rabat. “In Morocco, women out in the streets was a big deal. In conservative societies in general when there’s a presence of women, and women with strong beliefs, it surely has a big impact on society.”

Elgallaf has been providing free counsel to protestors charged or arrested since the first Feb. 20 protest kicked off regular demonstrations and rallies nationwide.

While the protests were understated compared to neighboring countries, King Mohammed VI responded quickly with a new constitution that increases the powers of the parliament and judiciary and strengthens the rights of women and minorities. It was approved by 98 percent of those who voted in July. He also moved parliamentary elections nearly one year ahead of schedule. Morocco’s moderate Islamist Justice and Development Party (PJD) won the most seats in the Nov. 25 elections.

The new constitution placated enough demonstrators to muffle the movement, said Brahim Elansari, a research assistant at Human Rights Watch in Rabat. “When the king first announced the new reforms for the new constitution people said this is good, the king is responding. But later when the draft came out, many didn’t believe it was what they wanted, while others liked it but said we need to push so that it’s implemented in a good way.”

Twenty-one year old Kamilia Raouyane is another young woman who has been active in the February 20 Movement since it first came together on Facebook and Twitter. Like many in the movement’s core, she remains unsatisfied with the king’s reforms.

“We want real, radical change: a civil state, a democratic regime, a real popular constitution. We want good education and a good system of justice. Stop arresting people for their ideas and have equality between the sexes in all fields,” said Raouyane, her rounded face highlighted with darkly-outlined eyes.

While the movement didn’t focus on women’s rights, gender equality was part of the political mix. In response, article 19 of the reformed constitution makes men and women equal citizens under the law and recognizes that women–in addition to having equal civil and political rights already laid out in the old constitution–have equal economic, social, cultural and environmental rights.

However, like many articles in the constitution, No. 19 has a qualifier clause that leaves things open to interpretation. The slippery wording recognizes coexistence with the kingdom’s laws and a constitution that elsewhere establishes Islam as the state religion.

Some in the movement, Raouyane said, also wanted to enshrine other women’s rights, such as equality in inheritance. Currently women inherit half as much as men based on interpretations of the Quran.

Raouyane, Belmkaddem and others in the group’s core continue to protest and push for such changes, despite some threats and opposition. Raouyane said at the start of the movement she received calls at 3 a.m. from someone calling her a whore and threatening sexual violence. Elgallaf said she received threatening messages via Facebook and a picture of her was posted online with the caption “Lawyer of Gays.” Others in the movement, men and women, were said to have been called homosexuals and atheists, terms that were used as slurs.

“My grandma, every time I meet her, she says don’t protest, you will go to jail, they will beat you,” said Raouyane, an intern at the Moroccan Association of Human Rights. “But I’m not afraid. I really believe in it. If I don’t do this, no one will do this for me.”

Layla Belmahi said new activists such as herself are also keeping the movement’s spirit alive. Last year when she was 16, she said, she didn’t care about what was happening in Morocco. The February 20 Movement protests sparked her interest and joining Twitter introduced her to a world of politically active Moroccans.

“You don’t hear as much about the movement as before, but I wouldn’t say it’s dead because it helped many people change their minds,” said Belmahi with a big smile, her fingernails covered in chipped blue nail polish. “I became an activist thanks to it in a certain way, so it’s alive through me and other activists.”

Belmahi, who is finishing high school, went on to co-found Woman Choufouch last summer, a group fighting sexual harassment, adapted from the SlutWalk concept. The group helped organize a protest in Rabat last month following the death of 16-year-old Amina Filali, who killed herself after being forced to marry the man who raped her. Several hundred people demonstrated to demand changes in the sexual violence laws.

While the movement’s members are still working and trying to maintain pressure on the government, Mustapha El Guemri, an activist who helped lead a session on gender equality at the meeting of activists in Bouznika, said they’re currently in a moment of waiting.

“Nothing has changed but the Moroccan people want to give a chance to the new reforms and government. The people are waiting,” he said. “But I have a belief that in six or eight months or a year, they will be convinced that things have remained the same and nothing has changed, especially at the economic and social level, and they will find that the February 20 Movement is still here and working and we will embrace them.”

Juhie Bhatia reported from Morocco on a fellowship from the International Reporting Project (IRP), an independent journalism program based in Washington, D.C. She is the managing editor of Women’s eNews.

“My Makhzen and Me” documentary:
http://www.mymakhzenandme.com 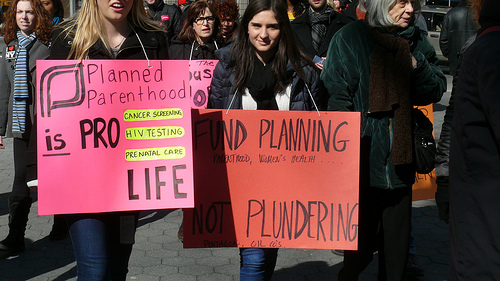 Planned Parenthood Back in Line of Heavy Fire