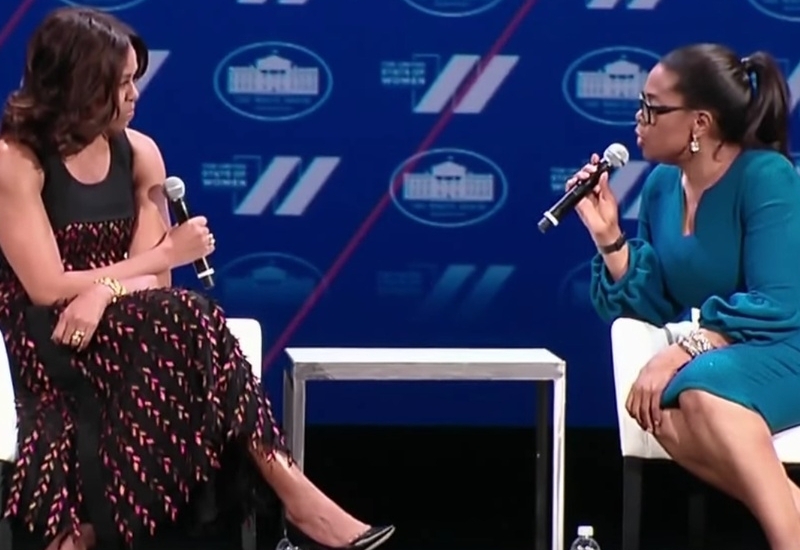 (WOMENSENEWS)—The United State of Women gathering at the White House on June 14 drew a high-powered roster of big names from politics, business and entertainment.

It also gave President Barack Obama the opportunity to declare himself a feminist during an afternoon speech in a moment that took the house down.

“I may be a little grayer than I was eight years ago, but this is what a feminist looks like.” —@POTUS pic.twitter.com/kwZQ4dXO5S

In one announcement at the gathering, Amazon, PepsiCo, Gap Inc. and 25 other companies signed the “White House Equal Pay Pledge” in an effort to reduce the gender pay gap. These companies committed to reviewing their hiring and promotion practices annually to protect against bias, and to build equal pay efforts into their larger equality initiatives.

The White House also announced Oracle’s $3 million pledge to get girls involved in science, technology, engineering and math worldwide through aids to a U.S. government initiative to help girls stay in school. This comes on top of Oracle’s $200 million to support the White House’s Computer Science for All, an initiative to increase diversity in tech.

The gathering was a show in force for diversity, as both a carefully produced promotional video and panelists celebrated.

Miriam Yeung talking about the importance of always including Indigenous &AAPI in WoC spaces is ESSENTIAL! She’s BOSS. #StateofWomen #USOW

Throughout the day, speakers took an intersectional approach to violence against women.

Joanne Smith, executive director of Girls for Gender Equity and co-chair of the New York Young Women’s Initiative, addressed the unique dangers of being native, black, Latina or Muslim. She also included the challenges of gender fluid and trans women, particularly trans women of color, as they work to dismantle patriarchal and racist social systems.

Smith advocated for intersectional support of social justice movements, including Black Lives Matter and Move to End Violence. She said she sees these movements as core to achieving gender equity for all women.

Sexual assault and racism are about power. This abuse is 100% preventable. Joanne Smith #StateOfWomen pic.twitter.com/2lMDwArbrK

The event also provided an opportunity, at its conclusion, to support inclusion and diversity when a broad coalition of rights groups, representing immigrants, LGBTQ, Arab and anti-violence organizations held a vigil. They came together to join people around the country this week who are mourning the victims of the mass shooting in Orlando, Florida, a the Pulse night club, which was hosting Latin Night.

“Women together mourn for the victims and their families – a majority of whom are Latinx,” said Andrea Cristina Mercado, co-chair of the We Belong Together Campaign, which is fighting deportation policies, in a press release. “And we stand united against attacks on the Muslim community.”

Some organizers had considered canceling the State of Women gathering, but in the end it went on as a forum for emphasizing the importance of comprehensive equality across all genders and identities.

“We know that our lives and our stories are intertwined and connected, and our desire to stop hate and stand for love and compassion is universal,” Mercado said. “This act of violence is not an isolated incident, and while we mourn we must also recommit ourselves to fight hate-filled rhetoric from politicians and candidates, and policies that dehumanize our brothers and sisters.”

“Instead of a moment of silence for #Orlando, let’s have a moment of power.” -Bamby Salcedo #stateofwomen pic.twitter.com/6PdmxTgVkV

The summit addressed issues of sexual assault. In particular, rape on college campuses was a big topic after the national uproar around the Stanford rape verdict, in which the convicted defendant was sentenced to only six months in prison at the urging of his father, who said “20 minutes of action” should not further ruin his life. Critiques of the sentencing say it does not account for the ways in which those 20 minutes ruined the victim’s life.

“You may have heard that one in five undergraduate women are sexually assaulted in the course of their undergraduate careers,” said Megan Yap, an activist with the It’s On Us campaign, at the summit. She spoke of dealing with post-traumatic stress disorder after she was assaulted. “While I was powerless against the man who attacked me, I am not powerless in ending rape culture.”

Yap now conducts research on university policies to present trauma-informed recommendations to prevent survivors from increased suffering at the hands of the university.

The event also attracted criticism and spawned side events.

In light of heavy attacks on access to abortion in the United States, Amnesty International, the rights group, and Reproaction, a new direct action group based in Arlington, Virginia, called for abortion to be an “explicit priority of the summit.” The groups teamed up with the Center for Health and Gender Equity to run a full-page ad in the Washington Post on the day of the gathering to lament the precarious state of abortion access.

Instead, speakers treated reproductive justice and the right to choose as an assumed shared value throughout the day.

Critics also called for executive action to clarify the Helms Amendment, in order to allow U.S. foreign assistance to fund abortions in the case of rape, incest and life endangerment.

The gathering also gave a national stage to groups such as Family Values @ Work, a network of organizations advocating for workplace reforms. Leaders of the group participated in the gathering and staged a June 15 lobbying day on Capitol Hill for passage of the Healthy Families Act. Organizers also used the day to celebrate the 34 victories across the country in paid sick days, including San Diego’s vote to raise minimum wage and pass a paid sick leave law last week.

“Thanks to the tremendous work by diverse coalitions, more than 11 million more Americans will now be able to earn paid sick days,” said Ellen Bravo, executive director of Family Values @ Work, in a press release. “But you shouldn’t have to win the zip code lottery to have access to this essential workplace standard.”

The gathering had tycoon Buffett, CEO of Berkshire Hathaway, rubbing elbows with successful female entrepreneurs such as Carla Walker-Miller and Ayo Megbope, both of whom have tapped capital and management education through the Goldman Sachs 10,000 Women Initiative. In a panel on business innovation, both women discussed starting businesses in their respective hometowns of Detroit and Lagos, Nigeria.

Walker-Miller, as president and CEO of Walker-Miller Energy Services, an energy efficiency consultancy, promotes renewable and sustainable technologies for a variety of customers, from homeowners to the city of Detroit. She used to call herself “just a small business owner,” until she realized her power in pushing local growth.

“I’m a small business owner and we’re engines of the economy,” she said during the panel. “We create jobs, we save neighborhoods, we do whatever needs to be done.”

As of 2014, female-owned enterprises employed nearly 8 million workers, according to a report by Womenable. Between 1997 and 2014 the number of female-owned firms increased by 68 percent, one and a half times the national increase, fueling their impact.

Megbope started a catering business in Lagos with $8 in her pocket. Now she owns two restaurants with over 50 full-time employees. She said Goldman Sachs 10,000 Women Initiative helped her meet other businesswomen struggling with similar obstacles. That networking boosted her confidence and inspired her to start her own mentoring program.

“I said to myself, if people could invest in me, then I needed to pay it forward,” she said during the panel.

Ayo Megbope, @GS10KSmallBiz: “I said if people could invest in me, I had to pay it forward. Today I mentor 60 women” #StateOfWomen

Restrictive social expectations can also be a hurdle for women, something that Buffett reflected on in his own family. He said his sisters were just as, if not more, brilliant than he, but faced the expectations of an early marriage and life at home. “And they got that message in a thousand different ways,” he said.

Another speaker at the gathering, Mikaila Ulmer, stepped onto the stage to Nas’s “I Can” to introduce President Obama.

Ulmer is the founder and CEO of Me & the Bees Lemonade. She spoke of how she turned an initial fear of bees into a plan to sustain its population, a critical part of our ecosystem. Her original lemonade stand started out selling her recipe made with honey from local bee populations. Today, her product is sold in stores across the country and is part of a larger movement around ecologically responsible food sourcing.

At 11 years old, Mikaila speaks to the power of childhood innovation. “Entrepreneurs hold the American dream and the biggest dreamers are kids,” she said. “We dream big, we dream about things that don’t even exist yet! We believe in our dreams…we believe in the impossible.”