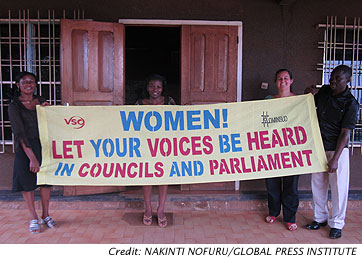 In Cameroon’s Northwest Province, female elected representatives are in particularly short supply. Citizens, advocates, local officials and newly minted female candidates are trying to make 2012 the year to change that.

Now the mother of three is also a candidate for her village council, running on behalf of the Social Democratic Front, the country’s leading opposition party.

Then a regional civil society organization, Community Initiative for Sustainable Development, started a campaign in 2010 for more women to run for office in this year’s elections. Ngalla attended one of its meetings. “I was automatically inspired to become a part of the few women whose voices are heard within the political scene,” she says.

Ngalla has been traveling from Bamenda in the heavily populated region adjoining Nigeria to her home village where she plans to run for councilor in order to talk to women about the need for more female representation.

Ngalla says one group of about 150 women were so inspired that in less than 15 minutes, they collected the equivalent of $32 for her to keep traveling and speaking to more women. She gave $16 back to the group’s leaders and recommended they buy laundry detergent and bath soap for poor women and widows around the village.

With no campaign funding, Ngalla says she will use the power of the spoken word to gain support from her fellow women.

“If you plan well with the women, say things that will move them, they will give you their support,” she says.

Elections Not Yet Announced

The government has not yet announced the legislative and municipal elections in Cameroon for 2012. Elections are usually held every five years in Cameroon and the last elections took place in 2007.

Women have been slowly adding to their ranks in elected office in Cameroon.

Local and international organizations have been collaborating with men and women in government to boost these numbers in the Northwest Province, where women’s political ranks are particularly low. Of 20 parliamentarians representing the region, just one is female. The region has no female mayors. Of 1,088 councilors, 77, or 7 percent, are women.

Vivian Epie, 40, an administrator for the ministry of women and family empowerment delegation in the northwest region, says women and men prioritize different issues.

Community Initiative for Sustainable Development’s goal for 2012 is to elect 330 women as councilors, five as mayors and five as members of parliament in the Northwest. Since 2010, it has been rallying women’s groups and churches, sparked by the support of Bread for the World, a German program that funded the initial campaign.

The campaign is now funded by Voluntary Service Overseas, an international development charity that began in 1958 in London. It encourages residents to pin a yellow ribbon to their clothing to show their support for more women in office.

Hain Michelle, a Voluntary Service Overseas volunteer from Australia working with Community Initiative for Sustainable Development in Cameroon for two years, says the campaign challenges the government’s claim that it is difficult to find competent women who can compete in political elections. Since the campaign started, almost 500 women have declared their intention to run in this year’s elections.

Regina Numfor, 49, says that Community Initiative’s campaign is also inspiring her to run for office this year. The secondary school biology teacher says she is determined to become a councilor for the Cameroon People’s Party, led by Edith Kahbang Walla, one of the two female candidates who ran in the 2011 presidential elections.

“While in the homes, women provide solutions to their husbands on some pressing issues that they have in their gatherings or in their council,” she says. “When these husbands go back to the meetings, they present these solutions and take the credit. Meanwhile, this was provided by their wives back home.”

Mary Nji, an entrepreneur in Bamenda, says politics is the last thing that she wants to involve herself in. She would rather dedicate her time to her family.

“I want to enjoy my grandchildren, my husband and my children,” she says.

Nji says politics are too dangerous.

“Politics in the Northwest region involves connecting with the underworld, killing your own brother or sister, slandering, backbiting, blackmailing–all in the name of becoming a mayor, parliamentarian or a councilor,” she says.

Regina Formunung sends a different message. She is the first deputy mayor of Bali Nyonga, a subdivision of the Northwest Province.

“I am calling on women to come and join me in politics,” she says. “I was once a farmer, but I took up the courage to campaign for a place as mayor in the Bali Nyonga Council.”

Formunung calls on women to vote for one another in order to enable women to reach higher political offices.

Prudencia Bamu, 60, a member of Christian Women Fellowship, a women’s group in the Presbyterian Church in Cameroon, says that women’s roles in the church provide an example of how they possess qualities that could benefit national politics.

“Imagine a church service where women are absent,” she says. “The service of that day appears very dead and inactive. Women stimulate the church every Sunday, and their presence is relevant in the smooth functioning of the church. This shows that women are the shakers of the nation and their voices should be heard in our councils and in parliament.”

Would you like to Send Along a Link of This Story?
https://womensenewsp.wpengine.com/story/leadership/120415/political-scouts-recruiting-in-northwest-cameroon 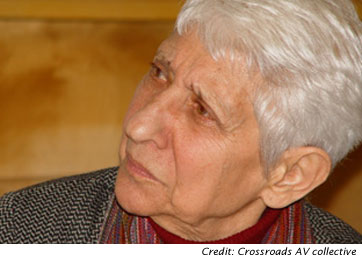 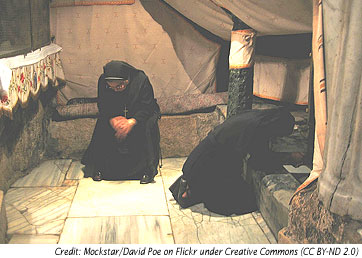