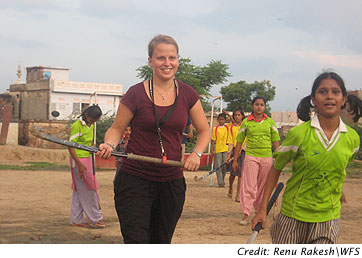 An out-of-the way village in India has attracted an after-school field-hockey program run by a female player from Germany. At first the parents thought it was just for boys. But after a while that changed.

JAIPUR, India (WOMENSENEWS)–It’s 5 p.m. and the girls have started gathering outside the dilapidated fort, a landmark in the sleepy Rajasthani village of Garh Himmat Singh, about 80 miles from the state capital of Jaipur.

Field hockey practice will start in a few minutes. Every evening, a group of 15-20 youngsters–girls on same days, boys on others–scramble to get hold of a hockey stick and start warming up before their daily match.

The girls and boys play on alternate days. But even when it’s the girls’ day, the boys hover around to get some field time after the game.

Sanika Khandelwal, 11, has barely learnt to control the ball properly, but when her coach, German Antje Weidemann, shouts "shoot," she hits it past the goalkeeper, Sangram Singh.

"It’s a goal," says Weidemann, slapping the palm of the jubilant Sanika.

The 6-year-old goalkeeper–the group’s youngest member–hits the goalpost with her stick in frustration. "Not again!"

Girls on a sports field would have been unthinkable in this village not so long ago. But times are changing in Garh Himmat Singh, thanks to a project initiated by Andrea Thumshirn, 36, a first-league hockey player from Germany.

Thumshirn, who owns a Berlin travel agency that specializes in Southeast Asia,

has been playing hockey since she was 6. She first came to India in 1998 and instantly "fell in love with the people."

On one of her first trips her Jaipur-based Indian business partner, Dilip Singh Chauhan, took her to Garh Himmat Singh, a farming village of around 4,000 people that is typical in many ways. It has five schools, no doctor and water that flows at the mercy of erratic electricity generators.

But something about Garh Himmat Singh struck a cord with Thumshirn.

"We took a walk in the small lanes and even visited some schools," she says. "I saw children sitting on the stone floor. The conditions were bad: Two teachers were responsible for four classes at the same time! English lessons were on the time table but since the teachers themselves couldn’t speak the language, no one expected them to teach it to the kids. I saw a lot of English books lying around untouched in the principal’s room. That’s when I decided to help the children in some way."

In 2009 Thumshirn brought a mixed hockey team from Germany to the village. Through donations they were able to bring a carpet for the girls’ school, some sweaters for the cold winters and school equipment and uniforms for those who couldn’t afford them.

In 2010, after the Hockey World Cup, the parents of some German national players who were en route to Agra came to the village. A veterans’ hockey team from Vienna, Austria, followed.

In July of that year Thumshirn started the Hockeyvillage India project to train the local kids in hockey and give them English lessons.

At first the local parents ignored invitations to send their daughters for practice. But eventually, organizers say they began to understand that the program was also meant for girls.

On a bright day in August this year, 14 boys and seven girls took a train to Jaipur to play their first match against a team of Delhi school children. Thumshirn’s team lost 6-0.

Yogendra Singh Naruka, 13, the captain, looks on the bright side.

"Only months back, we had no idea about how hockey is played and here we were playing a match with experienced players from a prestigious school. We were completely outplayed on the field but I can’t even tell you how valuable an experience like this was for all of us," Yogendra says.

In Jaipur, the children met former Indian goalkeeper Baljit Singh Darwal, who joined them for lunch, while former national coach, Harendra Singh, came to Garh Himmat Singh a day earlier to play with the boys.

It was on that day that Weidemann and her friend Judith Woeff joined Hockeyvillage India as volunteers. Thumshirn began recruiting volunteers last summer.

"Two French girls stayed here for six weeks. Then a German girl was here for two months. There was a long gap in the winter because I was struggling with my business in Berlin and didn’t find time to select volunteers. But in March this year, two German girls came for three months and Antje and Judith are here for six weeks," she says.

The volunteers, mostly students and hockey players from Germany, pay for their travel and food — around $6 a day. They are provided with free accommodation, two mud houses with limited electricity and water supply.

Would you like to Send Along a Link of This Story?
https://womensenewsp.wpengine.com/story/athleticssports/110914/village-girls-in-india-discover-field-hockey-kicks

Renu Rakesh is a freelance journalist from the western Indian state of Rajasthan. She specializes in women-related issues. 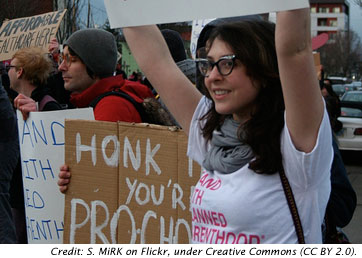 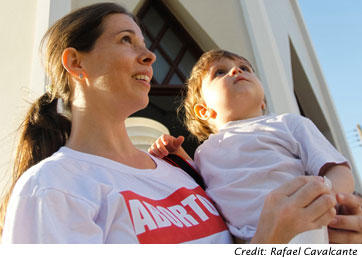