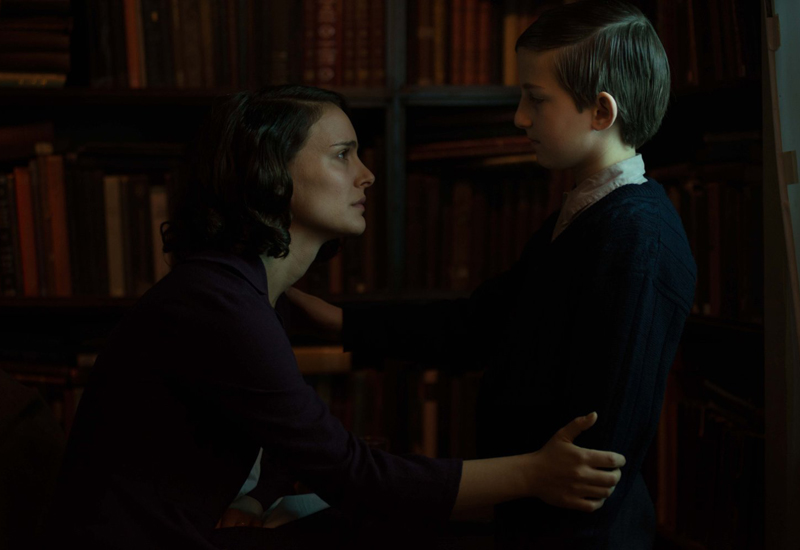 Natalie Portman directed, scripted and stars in “A Tale of Love and Darkness.”

(WOMENSENEWS)—“A Tale of Love and Darkness,” which opens today, Aug. 19, is the stunning directorial debut of Natalie Portman. She also scripted and stars in this cinematic adaptation of Amos Oz’s eponymous memoir about his childhood and family during the historically turbulent founding and early years of the state of Israel. Portman portrays Oz’s mother, Fania, a brilliantly imaginative woman who attempts to lift her 8-year-old son and herself out of their depressing circumstances by taking him on parable-like adventures through storytelling. As a director, Portman weaves the vividly colored story sequences with alternatively dark and desaturated scenes from their real life, fraught with the poverty and violence that surrounds them. The focus on the emotionally gripping relationship between mother and son and the film’s ambitious and effectively stylized structure are indications of Portman’s quality as a director and her sophisticated point of view from behind the camera.  Brava, Portman! See this film, and look forward to more from her in the future. In Hebrew, with English subtitles.

“Mad” is a thoroughly engaging and emotionally gripping tragicomedy about dysfunctional mother-daughter relationships.  When Mel (Maryann Plunkett), a recently divorced middle-aged mom, has a full on nervous breakdown, her two adult daughters must weigh in on what to do to care for mom. Both daughters have their own issues, stemming mostly from their relationship with Mel. Connie (Jennifer Lafleur), the eldest, masks her vulnerability with meanness. Younger sister Casey (Ellis Cahill) is struggling to find and give expression to her identity. Acting out of familial love and loyalty that’s been shrouded by years of emotional trauma, the three women interact in ways that are heartbreaking, hilarious and – thanks to beautiful performances, a superb script and sensitive direction — truthful to the core. No spoilers, but there is hope for resolution. This is a marvelous first feature from writer/director Robert G. Putka who, at age 24, has given birth to three wonderful female characters on the big screen. See this film. It opened Aug. 14.

“Ixcanul”  (aka “The Volcano”), Guatemala’s first-ever submission for the foreign language Oscar, is a stunningly beautiful and moving drama about Maria (Maria Mercedes Coroy). The 17-year-old Mayan girl must find her way out of a universal dilemma that hits her particularly hard because of her cultural roots. Maria, who toils with her parents on a coffee plantation, has dreams of exploring the world beyond the slopes of the dormant volcano that overshadows the plantation. However, her parents have prearranged her marriage to the plantation’s much older widowed foreman (Justo Lorenzo). The family’s future is threatened when Maria’s co-worker Pepe (Marvin Coroy), promising to take her to America, impregnates and abandons her. Maria’s efforts to abort the baby land her in the hospital, where the clash between her traditional Mayan culture and Spanish-speaking Guatemalan society become evident. This first feature is from writer/director Jayro Bustamante, who hails from the rural region where the film was shot. It’s culturally sensitive and strongly feminist in its representation of women as core decision makers and activists in traditional cultures. A must-see.

“Collide” (aka “Autobahn”) is an action thriller that begins with Juliette’s (Felicity Jones) medical emergency. It causes her main squeeze, Casey (Nicholas Hoult), to resurrect his drug-related criminal past in order to score quick cash to cover the cost of treatment. Sirs Ben Kingsley and Anthony Hopkins bring their formidable talents to the fore as drug lords whose vicious rivalry drives the plot from one threatening twist to the next. The film’s premise is a bit thin, but the plot twists are clever, the performances are titillating and the action is non-stop. If you’re in need of edge-of-your-seat viewing, writer/director Eran Cheevy’s stylish thriller will do it for you.

In “When Two Worlds Collide,” filmmakers Heidi Brandenburg and Mathew Orzel chronicle Amazonian indigenous activist Alberto Pizango’s efforts to curtail deforestation, preserve native land rights and derail Peru’s market- and government-driven race to modernization at the expense of traditional cultures. The documentary’s revealing aerial footage of vast-scale logging, open-cast mining and ever-expanding palm oil plantations illustrates the current issues. And archival footage sets the historical context of the 2008-9 violent confrontation between indigenous people and the government of Prime Minister Alan Garcia, whose decrees made it easier for Indian communal lands to be sold off and for Amazonian territory to be drilled for oil and gas by foreign companies. Ten civilians and 23 police officers died in the confrontation. Moral ambiguities surround Pizango’s call for the violent uprising, but the filmmakers are unambiguously on his side and you will be, too. The film opened Aug. 17.

“Lo and Behold, Reveries of the Connected World” is Werner Herzog’s latest documentary. It’s a personal essay about human interaction and the evolution of human society in our increasingly computer-dependent and driven universe, where Buddhist monks tweet instead of meditate. Whether you find Herzog an inspiring teller of truths or self-satisfied social interlocutor, his films are required watching for any serious cinephile.

Stay tuned for next week’s reviews and movie news.