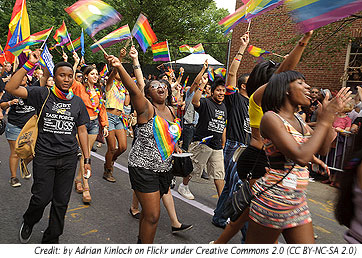 New York’s legalization of same-sex marriage set off euphoric celebrations this week. It also offers a chance to showcase the political backing of those in the 18-34 age bracket.

NEW YORK (WOMENSENEWS)–When New York became the sixth state to legalize same-sex marriage last week, it extended marital rights and privileges to twice as many Americans , the Associated Press reported. The state with 19 million residents is the third-largest, trailing California and Texas.

The late-night passage of same-sex marriage legislation in New York on June 24 created a powerful afterglow here, exhilarating the thousands who marched in the annual New York City Pride parade and inspiring stories of exuberant couples planning nuptials after the law takes effect in July.

In a related victory this week, federal immigration officials canceled the deportation planned for a Venezuelan man in New Jersey who is married to an American man, the New York Times reported June 30. The case was being watched for signs of whether federal officials would ignore the couple’s marriage under the 1996 Defense of Marriage Act, which prohibits federal recognition of same-sex marriage. Apparently not.

Rhode Island provided a limited step forward for the rights movement June 29 by approving civil unions for same-sex couples. Now same-sex couples there can enjoy such rights as hospital visitations, joint bank accounts and property transfers. Even though civil unions have served as stepping stones to marriage laws in other New England states, activists were disappointed, seeing exclusions for religious institutions in the civil-unions law as creating big gaps.

The activism and the push-back is likely to continue for years to come.

Twenty states still have constitutional bans on same-sex marriage and 12 others have laws against it.

In May, the Gallup Poll found 53 percent of Americans favor laws recognizing same-sex unions, a first-time majority opinion. Support was strongest among those between ages 18 and 34, and significantly weaker among those 55 and older.

This is the same age group that shook off its reputation for political apathy in 2008 and played a major role in electing President Barack Obama. (Even if some of were too young to vote, they worked.)

But the man young people elected to the White House isn’t matching the generation’s enthusiasm for marriage equality. Federal agents setting aside DOMA and backtracking from deporting an immigrant may indicate an administrative rebuttal to an unfair law. But The Los Angeles Times reports that Obama, while hailing the New York law, isn’t vowing the same level of federal support, saying that same-sex marriage should be left up to the states. 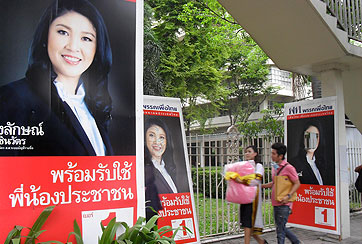