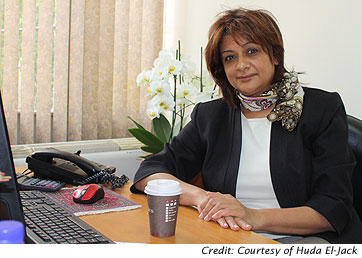 Entrepreneur Brews Up Coffee and Wi-Fi in Ramallah

Ramallah’s sole chain of coffee shops–ZAMN–was started by Huda El-Jack, who moved there in 2003 as a trailing spouse and saw a business opportunity when she couldn’t find a good cup of coffee. She’s now eyeing more towns in the West Bank.

JERUSALEM (WOMENSENEWS)–For the first six months after Huda El-Jack sold her California house and moved to the West Bank in 2003, she had second thoughts.

"I wondered what the heck I had done," she laughs during a phone interview. "I still sometimes wonder. I have a lot of questions about whether that was a good decision."

El-Jack, who has a graduate business degree and a background in information management, is a mother of two living in the Palestinian territories. There, in her husband’s hometown of Ramallah, she co-founded the first and only branded coffee shop franchise, ZAMN (Time) in 2008. She now has two shops.

El-Jack and her two partners are negotiating a potential third West Bank location and have fielded inquiries from Haifa, Nazareth and Tel Aviv.

"I have to be ready because there is stiff competition there," she says. "Here, we are kind of in a class of our own."

The two cafes today are managed by a former hotel administrator, freeing El-Jack to work as an investment manager at Siraj FUN I, a Palestinian private equity fund. She is the only female director of the portfolio firm Wassel Palestine Logistics and Distribution Company, the West Bank UPS representative, based in Ramallah.

In mid-July, the board voted in El-Jack as interim chief of the 1,000-employee company, making her the first female CEO of a publicly traded Palestinian business.

"She has really broken the glass ceiling," says Palestinian Stock Exchange CEO Ahmed Aweida, who is one ZAMN’s two other co-owners.

Overall, fewer than 20 percent of Palestinian women are active in the work force. The percentage is much higher in cities such as Ramallah. The coffee-shop franchise currently employs six women among its 30 workers, a number that fluctuates since many of the employees are college students.

El-Jack estimates that two-thirds of the coffee shops’ patrons are female, ranging from middle school-age to middle age.

ZAMN’s branded coffee, free high-speed wi-fi and upscale menu appeal to Ramallah’s women as a more pleasant alternative to the more male-dominated neighborhood coffee shops they might have frequented occasionally. The modern amenities and Western-influenced menu items, such as waffles, draw Ramallah’s girls and women for daily get-togethers, after-school snacks and study sessions.

"We achieved a paradigm shift," El-Jack says. "It used to be a treat to go to a cafe now it’s become a habit."

Like Israel’s popular coffee bar franchises Aroma and Arcaffe, ZAMN has proven that people are willing to pay a few shekels more for a cup of joe when the setting is appealing.

El-Jack says, "Nobody thought the market would consider coffee as a premium product, but we felt it’s all about the experience, so we spent a lot on the infrastructure and ambience" at the two locations, situated less than three miles apart.

Born in Sudan into a diplomatic family, El-Jack went to college in California, where she met and married Bashar Amer. In the summer of 2000, the family visited Amer’s ailing father in Ramallah, the administrative center of the Palestinian Authority and home to about 27,000 Muslim and Christian Arabs.

"Things were really great. There was a lot of hope. My husband said, ‘How about moving here for a couple of years?’ and we invested here. Two months later, everything went nuts," she says. That was when the Arab uprising (intifada) began a paralyzing spasm of attacks and reprisals in the region.

El-Jack took the children back to California until the summer of 2003, when the violence had calmed enough that she felt she could rejoin her husband.

"My partners and I really wanted a place in Ramallah to have a good cup of coffee, but the closest place was in Jerusalem or Tel Aviv," she says.

ZAMN coffee is custom-made for the Palestinian palate by an Israeli blend house, about 99 percent Arabica with African and South American beans added for froth. Menu staples are procured from small Palestinian producers.

El-Jack describes the local economy as "picking up, but far behind Israel." The Palestinian territories’ overall economic activity is about $3,000 per person, one-tenth of that in Israel. The Palestinian Authority’s dependence on foreign donations has a negative impact on confidence in the market, she says.

ZAMN, however, saw a revenue increase of 15 to 25 percent per month from 2010 to 2011, after aggressively paying down debt the first few years. A forthcoming mid-year report on the privately held company, El-Jack says, shows a profit margin that has doubled through the implementation of efficient business practices.

"In Ramallah, there is no issue being a woman in business, although some are surprised that I’m the managing partner," says El-Jack.

Maysoon Odeh, owner of NISAA-FM, Ramallah’s only commercial radio station by and for women, says the touch of a woman was good in this sector.

"The whole concept of ZAMN was very new and the fact that it is led by a woman makes it more interesting. I believe the fact that she is successful will inspire others to take her lead," Odeh says.

El-Jack frequently meets with customers and investment groups from Israel and other countries over a cup of coffee at ZAMN, as publicity in the Israeli press and Internet sites has picked up.

"I want to get the word out that it’s possible to have a solution, that the private sector can calm things down by pumping money into the economy," says El-Jack.

Would you like to Send Along a Link of This Story?
https://womensenewsp.wpengine.com/story/entrepreneurship/110720/entrepreneur-brews-coffee-and-wi-fi-in-ramallah

Abigail Klein Leichman is a journalist who relocated to Israel from New Jersey four years ago. 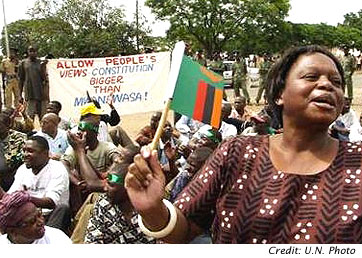 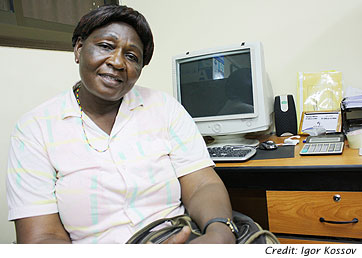