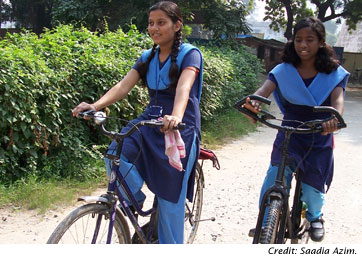 As part of a push to help its schoolgirls, India’s Bihar state gives a bicycle to every one with good attendance who reaches eighth grade. Officials say this and other efforts have helped lower girls’ drop-out numbers by 1.5 million in five years.

BIHAR STATE, India. (WOMENSENEWS)–Nivedita still isn’t sure she can complete higher studies, mainly because of the financial difficulties facing her large family.

But for now, she says, her transportation expenses are not the problem.

That’s because Nivedita–the third of five children–is the proud owner of a bicycle, presented to her by the Bihar government.

She rides the bike to school and also uses it to ferry younger siblings to their schools.

Nivedita’s classmate, 14-year-old Trisha–the youngest of four sisters and two brothers–also earned a bike of her own. Her father Vinod Rai, a government employee, says he is "proud of his daughter for she is independent now."

Nivedita and Trisha–identified by their first names only because they are minors–join about 871,000 girls who have earned bicycles from the state since 2006, when a program began giving bikes to girls who have an attendance record of at least 80 percent and reach eighth grade.

Bihar Chief Minister Nitish Kumar launched the program knowing that many young women gave up their education for marriage or because it is unsafe for them to travel long distances alone on public transport.

A bicycle increases schoolgirls’ mobility and the cost-free transportation to school reduces at least one major family expense in the impoverished state, where annual per capita income is around $300, well below the national average of around $800.

Male literacy here is only around 60 percent, but female literacy is about half that, according to government statistics.

Since the start of the program the number of female dropouts has fallen to around 1 million from 2.5 million, state officials say.

Anjani Kumar Singh is principal secretary in the Bihar department that oversees education. He says the bicycle program joins a multifaceted push to advance schoolgirls.

"Bihar has a very low female literacy rate, low enrollment of girls, high drop-out rate. To close the gender gap in schools we took many initiatives like distributing free uniforms and a cycle. We also launched the Akshar Anchal campaign for literacy among women," he said. "All these interventions have yielded results. Today, we have more girls than boys in school; the enrolment of girls has increased three times in the last four years. We have also recruited more women teachers than men."

The program issues a check directly to the young women whose schools function as auditors by helping them to open savings accounts and ensuring they deposit the correct amount. A purchase-of-sale receipt must go to the ministry. Many girls have added their own money to buy better bikes.

However, the financing system doesn’t always go according to plan.

"There have been instances when the girl’s family has used the funds for some other exigency," said Bilkis Jahan, principal of one of the high schools in the program. "Nothing much can be done in this regard, seeing the impoverished backgrounds of these students.

Dayashankar Tiwari, a principal in another school served by program, says it has lowered truancy.

"Earlier, parents had an excuse not to send their daughters to class, but now I have noticed that there is more than 90 percent attendance, which is very unusual," Tiwari said.

Gulfishan Perween, a social activist, says the program is a major sign of change for Bihar. "Parents who could not afford transportation for their girls’ schooling now boast of the independence their daughters are enjoying."

Would you like to Send Along a Link of This Story?
https://womensenewsp.wpengine.com/story/education/110304/indias-bikes-girls-wheel-in-higher-literacy

Saadia Azim is a Hindi TV journalist based in Kolkata, India, and is working with Sahara India TV Network. She was a regular contributor for Voice of America Hindi Radio Service and contributes coverage of women and development issues from Eastern India for various newspapers, Web sites and blogs. 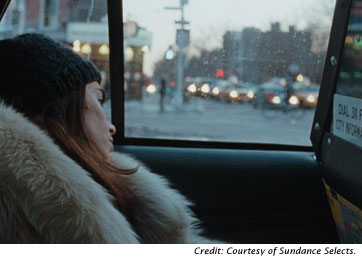