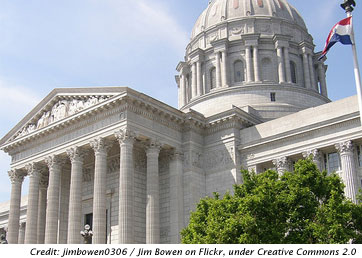 Missouri’s State Senate is about to consider whether to subject welfare recipients to drug testing. Numerous other states have said no to the idea and an anti-poverty group has re-released a report calling it a waste of money.

(WOMENSENEWS)–The Missouri State Senate is set to consider a bill that would allow welfare program administrators to order drug tests, a practice that a leading anti-poverty group has denounced as costly and counterproductive.

The bill, which passed the House in late January, says administrators can require a drug test if they suspect drug use by a recipient of Temporary Assistance to Needy Families, known as TANF, the welfare program that primarily assists single women and their children.

The bill was modified Feb. 7 by a Senate committee to say that the benefits will be distributed to a third party to allocate the family expenses to help the children, as long as a recipient who tests positive agrees to participate in a drug rehabilitation program.

The House version removed the parent’s portion of the money for a year.

Such proposed laws are popular within the states but none has passed constitutional muster.

Currently in Missouri, families of three can receive no more than $292 a month from TANF, which provides job opportunities and minimal, time-limited amounts of money.

"Taxpayers feel strongly that they do not want their hard-earned dollars being used to subsidize illegal activities," bill sponsor Missouri Rep. Ellen Brandom was quoted as saying in an article by the Missouri News Horizon.

On Feb. 3 analysts at CLASP–the Center for Law and Social Policy)–a Washington, D.C.-based anti-poverty group, reissued an updated report from 2009 outlining their opposition to drug testing for TANF recipients.

The authors rebut the idea that drug testing would save tax dollars. They says the tests–which don’t identify alcohol or prescription drug use–would each cost between $35 to $76 and secondary testing would be needed to rule out false positives.

Report authors Matthew Lewis and Elizabeth Kenefick said that in a time of economic struggle using government money in this way is inefficient.

Lower-Basch added that if states are going to test for "reasonable suspicion," it needs to be written out what that entails so as not to discriminate.

"Just because they are poor we can’t suspect they are doing drugs," said Lower-Basch.

The federal Department of Health and Human Services found that 9.6 percent of people living in households that receive government assistance used illicit drugs in the previous month, compared with a 6.8 percent rate among families who receive no assistance. The administration also found that heavy alcohol use was slightly lower in households receiving assistance than in those that do not.

At least 27 states have proposed drug-testing TANF bills in recent years, with some calling for mandatory, "suspicion-less" testing, according to the CLASP report.

Michigan passed the only mandatory testing bill in 2003, but the law was found to violate the Fourth Amendment’s protection against searches without reasonable cause.

Sen. David Vitter, a Louisiana Republican, has presented bills at the federal level over the last few years that would require mandatory testing of all TANF recipients and deny them benefits if they failed a second test after treatment, but none has passed so far.

Would you like to Send Along a Link of This Story?
https://womensenewsp.wpengine.com/story/economyeconomic-policy/110210/missouri-welfare-drug-testing-bill-moves-senate

Katherine Rausch is an editorial intern at Women’s eNews and a recent graduate of Ithaca College with a degree in journalism.