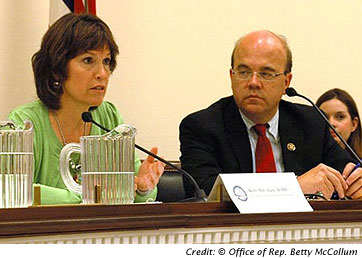 A bill to help curb child marriage in foreign countries passed the Senate unanimously in December but ran afoul of House GOP members. U.S. Rep. Betty McCollum plans to try again, with a vote that could come by May.

The bill they co-sponsored last year, alongside Sen. Olympia Snowe, R-Maine, passed the Senate unanimously, but ran aground in the House in December when it failed to win a two-thirds majority in a vote of 241 in favor, 166 opposed.

"We’re going to continue to raise the profile of this issue," McCollum’s Chief of Staff Bill Harper said in a recent phone interview. He estimated that a new measure would be ready for a new vote by May.

Harper added that Republican extremists, along with a handful of extreme anti-abortion Democrats, killed the non-controversial bill in December.

"Whether it was for political, ideological or bogus fiscal reasons doesn’t really matter," he said. "The result of their actions sends a message to the world that an extreme minority in the U.S. House can kill legislation to prevent 12-year-old girls from being forced into marriage and raped."

Harper said this time backers would do more to draw attention to the necessity of the bill and try to get the White House actively behind it.

The International Protecting Girls by Preventing Child Marriage Act instructs the administration to devise and implement programs over the next five years to help developing countries reduce instances of forced marriage. The bill would funnel assistance to multilateral, nongovernmental and faith-based organizations that educate and empower young women and girls.

The House defeat last year was linked to a pre-vote message from GOP leadership–called a "whip alert"–stating the opposition of party leaders, including John Boehner, now the speaker of the House, and Eric Cantor the new House majority whip, according to The Washington Post coverage after the December vote. The alert insinuated that funding sent to nongovernmental organizations through the bill might be used to perform or promote abortions, The Washington Post reported.

Women’s eNews scrutinized the bill, but found no mention of abortion.

UNICEF Communications Specialist Rebecca Fordham spoke in a recent phone interview about the importance of stopping the practice of child marriage.

"The critical fact is a girl who marries between the ages of 10 and 14 is five times more likely to die from pregnancy or childbirth compared with those who marry between ages 20 and 24," Fordham said. "Those (ages) 15 to 19 are twice as likely to die."

Girls who are forced or pressured into early marriage are more likely to drop out of school and often fall into a life of sexual subservience and isolation, she added.

"You’re not developing as a child should be allowed to do," said Fordham.

More than 60 percent of women in Bangladesh, Central African Republic, Chad, Guinea, Mali and Niger entered into marriage or such a union before their 18th birthday, according to surveys conducted by UNICEF between 1987 and 2006. Forced marriage is most common for girls living in the poorest 20 percent of households.

These actions and conditions must be matched by legislation in countries where forced marriage is a problem, Fordham said, pointing to India’s Right to Education Act. The law took effect April 1 of last year, making free, compulsory education a right to all children.

"It’s that kind of legislation that will help bring an end to early marriage," Fordham said.

None returned calls for comment on their position change.

After the House failed to pass the bill, Durbin responded strongly.

"These young girls, enslaved in marriage, will be brutalized and many will die when their young bodies are torn apart while giving birth," he said in a press statement issued after the House vote. "Those who voted to continue this barbaric practice brought shame to Capitol Hill."

No Impact on Direct Spending, Revenues

In October the Congressional Budget Office, which provides cost estimates for virtually every bill reported by Congressional committees, said the appropriation would not affect direct spending or revenues.

The bill’s estimated $67 million cost over the course of five years would come out of an available $108 million appropriated by the State Department for use by the House Committee on Foreign Affairs.

Rep. Ileana Ros-Lehtinen, R-Fla., who chairs The House Committee on Foreign Affairs through which the measure passed, introduced her own child marriage bill before the vote that she said would only cost $1 million overall, The Washington Post reported.

She also proposed a study to find out exactly how much money is already being spent on child-marriage prevention programs as she felt the bill lacked congressional financial oversight, according to the same article.

"It studies the problem, it doesn’t do anything about the problem," he said. "We need a strategy and we need action."

McCollum attacked the arguments about abortion and financial oversight after the vote.

"Had this legislation contained abortion provisions or authorized new spending, it never would have unanimously passed the Senate," she said in a press statement.

The following day, Rep. Steven LaTourette, R-Ohio, one of the 12 Republicans who voted for the measure, revisited the previous day’s action.

"All of a sudden there was a fiscal argument," LaTourette told The Washington Post. "When that didn’t work, people had to add an abortion element to it. This is a partisan place. I’m a Republican. I’m glad we beat their butt in the election, but there comes a time when enough is enough."

Would you like to Send Along a Link of This Story?
https://womensenewsp.wpengine.com/story/washington-outlookcongresswhite-house/110212/lawmakers-try-again-stop-child-marriage-bill

Karsten Strauss is a freelance journalist based in New York City. 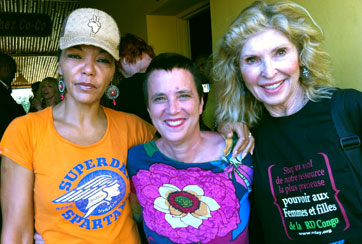 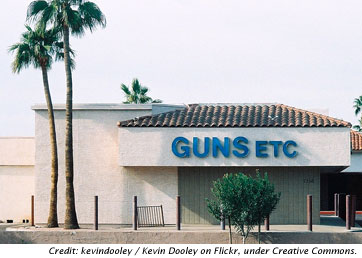