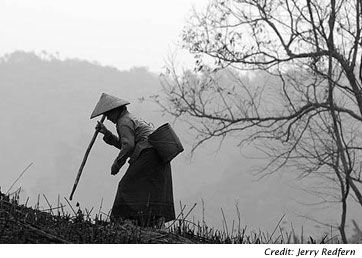 War-era ordnance kills and maims hundreds of Laotian villagers each year. Eighty-five percent of victims are men, leaving numerous women to fend for their families.

VIENTIANE, Laos (WOMENSENEWS)–Five years ago, 24-year-old Yue’s husband, Lue Ha, hit a bomb while foraging for medicinal herbs in the jungles of northern Laos. The accident blinded him.

Since then, Yue, who only goes by one name, says, "Ooh, there are many things that have changed." She feels "like two or three persons in one," having to care for her husband and two young children. "The greatest difficulty is everything in the family became mine–husband’s job became mine. Children’s job became mine…I just tried to grow very little rice for the family. And I also did a little embroidery to sell and earn money."

The couple could not maintain their farm, so Yue’s husband studied massage through an aid group in Vientiane, the country’s capital. Afterward, he opened a massage business in a tiny Phonsavanh apartment where the family of four now lives.

"Since I’m blind, it’s hard to earn a living," Lue Ha said. He gets on average two customers a day who pay about $3 a session. "It’s not really enough because we have to pay for rent, electricity, water." If no one shows up, "I don’t earn," he said.

If more than one customer arrives, Yue puts the couple’s 6-year-old son in charge of watching the baby. She changes from her traditional sarong to comfortable pants and she gets to work using the techniques she has learned through Lue Ha.

Every day, Laotian villagers risk their lives farming, fishing and foraging. This landlocked Southeast Asian country remains littered with bombs since the U.S. military dumped more than 2 million tons of explosives here between 1964 and 1973. Those bombing raids, unauthorized by Congress, were aimed at communist forces in an offshoot of the Vietnam War. But civilians still live–and die–in the aftermath.

When an American bomb explodes in Laos today, it’s likely to kill or injure a man. But the women in his life also suffer mental and economic consequences of accidents involving unexploded ordnance, known as UXO.

"The men do the plowing, so they take more risk," said Jo Pereira, an occupational therapist who spent several years as coordinator for a rehabilitation center known as COPE, based in Vientiane.

Up to 30 percent of the bombs did not detonate when dropped in the 1960s and 1970s. War-era ordnance has killed and maimed more than 50,000 people across Laos, according to a 2008 National Survey of UXO Victims and Accidents. UXO injuries account for the largest portion of COPE’s clientele; 85 percent of accident victims are male.

Laos ranks among the world’s poorest and least developed countries with a population that largely relies on subsistence farming. Many UXO accidents occur in fields far from hospitals and many villagers have little access to health care. Women often care for sick and injured family members at home.

Yue is young, healthy and fit for work. But many wives of UXO victims face the double burden of their husband’s injuries as well as their own health problems.

"It’s very hard for our family," said Mai Ma, whose husband, Phou Vieng, lost an arm and a leg to UXO. "He is the head of the family. He worked for his wife and children."

Now Mai Ma is the sole provider. She occasionally cooks for weddings and large parties, earning about $3 each time, but she never knows when the next job will come. "Sometimes we are hungry," she said.

Mai Ma suffers chronic digestive and throat problems and the pain of a broken arm that never fully healed. She raises buffalo and chickens, but often relies on her teenage daughter to help with household chores.

"Mostly our daughter does the cooking because my wife is not very healthy," Phou Vieng said.

Doctors have told Mai Ma she needs surgery that will cost about $300. The family can’t afford it, so she just gets home remedies and herbs, Phou Vieng says. He wishes he could help his wife, but "I cannot help myself."

Phou Vieng hit a bomb while digging a hole in 1998. "I just remember it was really loud; explode! And then I couldn’t remember anything," he said.

He spent several months in the hospital. An aid group helped the family move to a new home in town. He uses crutches to get around. He tends the buffalo when he can.

‘It Depends on My Wife’

"All the work went to my wife," Phou Vieng said. "I suffer because of that. Now some days we have not enough. It depends on my wife…We just eat whatever we find–we are very poor."

Poverty tops 30 percent in Laos and most people live on a dollar or two each day. An illness or accident can send a family into a quick downward spiral.

One day in January 2009, Su Phaeng left her Phongsali village on foot to buy a pig in a neighboring province. When she returned home that evening, her husband was gone–killed in a UXO accident.

Since then, Su Phaeng and her children struggle to feed the family. Her son works for a construction company and her daughter finds odd jobs cooking and cleaning. The family grows rice only to eat, never to sell, "because we’re afraid we won’t have enough," Su Phaeng says.

She sits in the dim light of her wooden home with rice sacks piled behind her. That’s the family’s security. It’s also her tormenter.

"When I eat rice, I keep thinking about my husband, who was working to grow rice to feed the children," she said. "Now the children eat the rice–but he can’t eat it."

Karen Coates and her husband, photojournalist Jerry Redfern, are working on a book about UXO in Laos. This story is written and photographed with support from the Fund for Investigative Journalism.

The National Regulatory Authority for the UXO/Mine Action Sector:
http://www.nra.gov.la 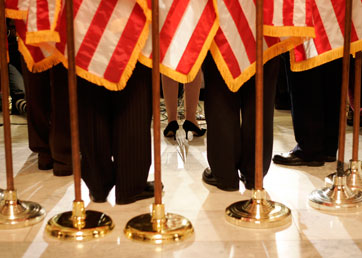 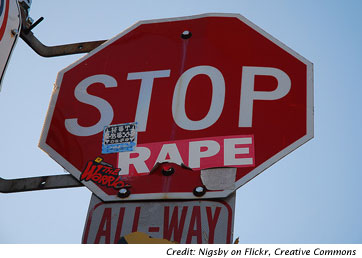