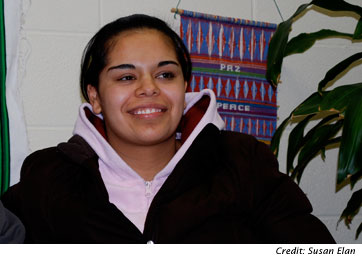 The criminal trial of a Kosher slaughterhouse executive in Iowa has ended in an acquittal, while a former underage worker, now a mother, awaits word on a special visa. Denial of the U-visa means deportation to Mexico and a life of fieldwork that won’t pay enough to properly feed her U.S.-born children.

(WOMENSENEWS)–Every day Quendi Garcia’s 8-year-old daughter asks her when she, her mother and her 4-year-old sister will be forced to leave Postville, Iowa, for Mexico, a place the two U.S.-born children have never seen.

"She says, ‘please let’s stay here; please let’s not go to Mexico,’" said Garcia, 24, who crossed into the United States from Mexico at age 14. She was bound for Postville and a job butchering chickens at Agriprocessors Inc., once the largest Kosher slaughterhouse in the nation.

Garcia worked on the killing floor at Agriprocessors until May 2008, when she and 388 other immigrant workers were arrested in a massive, military-style raid on the plant.

For most of her years at Agriprocessors, Garcia was by law too young to work at all, especially in a slaughterhouse where she handled sharp knives and was exposed to poisonous chemicals.

But Garcia was not called to testify at the trial that ended June 7 with the acquittal of Agriprocessors’ manager Sholom Rubashkin on charges of 67 criminal child labor violations. The charges included employing minors to work for up to 90 hours a week, to wield large power saws and knives and to work with chlorine and dry ice.

Rubashkin, who was convicted in November 2009 of defrauding the now-bankrupt Agriprocessors’ lender, is scheduled for sentencing on June 22. He could get up to 25 years in federal prison.

Since the raid more than two years ago, Garcia and dozens of other women and child workers have depended on St. Bridget’s Roman Catholic Church in Postville to pay for rent, food and medical bills while they await a decision on their immigration status. Federal immigration officials have forbidden them to work or to leave the state.

Sonia Parras Konrad, a Des Moines, Iowa, attorney who represents Garcia and nearly 50 other Postville women and child workers, said Rubashkin’s recent acquittal has no bearing on the outcome of her quest for special visas for her clients that would allow them to live and work legally in the United States.

Parras Konrad has obtained 40 of the coveted visas, known as U-visas, for her Postville clients. Only 10,000 U-visas are issued each year to immigrants who are victims of, or possess information about, crimes, including rape, torture, trafficking, domestic violence, sexual assault and blackmail.

Garcia said her supervisor at Agriprocessors had touched her inappropriately and tried to coerce her into having sexual relations with him using the threat of job loss. She is one of eight clients whose U-visa application is pending, Parras Konrad said.

Sister Mary McCauley, 71, a retired Catholic nun who has advocated on behalf of the immigrant women and their families since the raid, said Rubashkin’s acquittal made her "heart sick with disappointment."

McCauley was pastoral administrator at St. Bridget’s when hundreds of immigrant children and their families sought refuge in the chaos and fear that followed the raid. She has worked to raise funds to help them survive in Postville while their immigration fate is decided.

She understands why mothers like Garcia would struggle so hard to find the legal means to remain in the United States, McCauley said.

"We looked at pictures of young workers when they were arrested in May 2008 and looking at them in 2010 we saw there was a drastic weight loss," McCauley said of the state of malnutrition evident in child workers brought back to the U.S. from Mexico and Guatemala to testify at Rubashkin’s trial. "They are not getting enough food or good nutrition."

Garcia said the difficulties she faced at Agriprocessors are nothing compared with the life of hunger and lack of education her daughters would face if she is deported. The U.S.-born citizen children have no option but to leave with their mother.

Her job at Agriprocessors–butchering up to 25,000 chickens in a 10-hour workday, six days a week–was "very hard for my age," Garcia said. But the $6.25 an hour she earned paid for an apartment, clothing and food for herself and her children.

"I never went to school because I had to stay home to help with my brother who had a sick heart while my mother and father worked in the fields," Garcia said.

With no skills, Garcia would have to do farm work upon returning to Mexico, if she could find any. She would have no choice but to move with her children into her parents’ one-room shack, Garcia said.

"Maybe there is work, maybe no work," she said. "And not much money, maybe $5 a day. We would not have enough money and not enough food."

For McCauley, Postville dramatizes the injustice being done to thousands of U.S.-born children of undocumented workers under current immigration policy. The 14th Amendment of the U.S. Constitution guarantees citizenship to those born in the United States.

"The government is ignoring the rights of U.S. citizen children and family values by ignoring the need for the family to stay together," McCauley said. "I hope that when we pass immigration reform, we focus on family unity so that children born in the U.S. can earn a path to citizenship for their parents and the family can stay together."

Rev. Paul Ouderkirk, the former pastor at St. Bridget’s, said he finds it deeply troubling that the crimes committed at Agriprocessors against financial institutions will be punished while those committed against the people who worked there will not.

Ouderkirk called Rubashkin’s acquittal "a travesty." He also criticized the federal government’s decision last year not to try Rubashkin on 72 immigration counts, saying it denied workers the opportunity to testify about being illegally underpaid, overworked, threatened with job termination and sexually harassed at the plant.

Federal officials said Rubashkin’s fraud conviction allowed them to avoid the cost of a second trial.

"Our broken immigration system" punishes its victims and not those who profit from it, Ouderkirk said. "Postville is a microcosm of the many slave workers keeping the U.S. economy going."

3 responses to “Iowa Slaughterhouse Worker Fears for Her U.S. Kids” 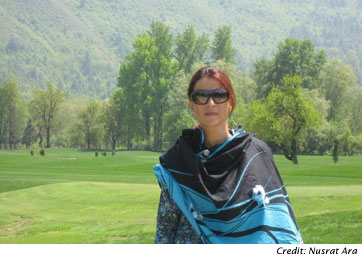