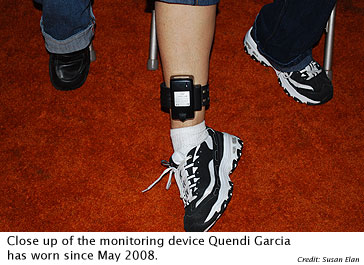 After 19 months of detention following an ICE raid on an Iowa meat processing plant, about a dozen immigrant women continue to wear tracking devices on their ankles while federal officials decide their fate.

POSTVILLE, Iowa (WOMENSENEWS)–At the age of 14, Quendi Garcia left her village in Mexico and crossed into the United States to begin her working life at Agriprocessors, a Kosher meat processing plant in northeast Iowa.

For the next nine years, Garcia worked 10-hour days, six days a week, cutting up thousands of chickens at the plant, one of the largest Kosher processing facilities in the United States, until a massive, military-style immigration raid on May 12, 2008.

Since her arrest for illegally entering the country, Garcia and her two U.S.- born daughters have depended on St. Bridget’s Roman Catholic Church and its Hispanic Ministry Fund to pay for their rent, food, heating and medical bills. Garcia must wear the monitoring device 24 hours a day. She is not allowed to work or leave the state. But she is free to move about in Postville.

St. Bridget’s has helped the families and underage workers who had no place else to turn after the raid, said Father Paul Ouderkirk, pastor at the church.

Garcia and many others remain in legal limbo as the Department of Homeland Security decides whether they qualify for legal residence or will be deported.

Garcia said in a recent interview that nothing she has survived–the clandestine crossing of the Rio Grande on foot as an adolescent, her years of knife wielding work on the killing floor of the slaughterhouse, the frigid winters in her adopted home–compare with the anxiety, fear, depression, sadness and feelings of helplessness that she has experienced following her arrest and detention 19 months ago on immigration charges.

She has been forced to wear a two-inch thick cube-shaped tracking device on her ankle. The electronic monitor rubs against her skin causing bruising and makes it difficult to walk.

Immigration officials have described the monitoring device in some news reports as a humanitarian measure that allowed mothers arrested in the raid to return home to their children instead of remaining in detention.

More than a year and a half after the Postville raid swept up 389 mostly Guatemalan and Mexican immigrants, 11 women, including Garcia, still wear a monitor that takes two hours a day to charge and cannot be removed while bathing.

Some lawyers have been more successful than others in having them removed. Like so much about the case, those permissions appear arbitrary.

The detainees are prohibited from leaving the state and are not allowed to work.

Some were expected to serve as prosecution witnesses in an immigration trial that for months had been scheduled to begin on Dec. 2. Agriprocessors’ former vice president Sholom Rubashkin faced 72 federal charges that included violations of immigration and document fraud laws.

Instead, those federal charges were dropped last month to avoid "an extended and expensive trial" and "lessen the inconvenience to witnesses," Assistant U.S. Attorney Peter Deegan, Jr. wrote in a motion to dismiss without prejudice.

In November, Rubashkin was convicted in a separate trial on 86 financial fraud charges that included bank, mail and wire fraud and money laundering.

The state has scheduled a status hearing on more than 9,000 counts of state child labor law violations for Jan. 6, 2010. Some of the women held in Postville are expected to testify.

No Chance to Tell Their Stories

Sonia Parras Konrad, a Des Moines attorney who has represented 44 Postville clients at no charge, said with Rubashkin facing no further federal charges many of the immigrants who remain face deportation without ever having the opportunity to tell of the abuse and exploitation they have endured.

The stress of separation from loved ones who have already been deported and the worry of not knowing whether they too will be forced to return to countries where they have no hope of finding work has created a significant need for counseling, Deutsch said.

Earlier this week, Women’s eNews spoke with five of the 11 women who are still wearing the monitors. All of them said the devices create bruising when they walk and interfere with their sleep. The remedy officials have provided in some cases was to switch the monitor to the other leg, Aleman said.

Department of Homeland Security spokesman Tim Counts said some of the monitoring devices had been removed but he could not give an exact count. Counts said he did hear of complaints but has "no evidence of documented injuries."

Immigration reform advocates and a volunteer coalition of religious leaders, local citizens, lawyers, social workers and translators have expressed outrage over the decision to drop the federal immigration charges against the plant owner Rubashkin.

Leslye Orloff, director of the Immigrant Women Program at Legal Momentum, a women’s legal defense and education fund in Washington, D.C., said dismissal of the federal immigration case denies abused women and child workers at the Postville plant the chance to bring the "perpetrator to justice."

It also makes it more difficult for the workers who were victims of crimes such as sexual assault and trafficking to obtain special visas (called U visas) that would allow them to live and work legally in the United States, said Parras Konrad.

"They went all the way with the immigrants, why not with the people responsible for hiring the immigrants," Parras Konrad said. "ICE (U.S. Immigration and Customs Enforcement) planned the raid for 18 months to make an example of the immigrants and it showed. They just wanted to scare other employees."

Bob Teig, a spokesman for the U.S. attorney’s office, said he could not comment.

Parras Konrad, the detainee’s pro bono lawyer, is in Washington, D.C., this week to ask officials at the Equal Employment Opportunity Commission to take action on 20 complaints she filed in August 2008 involving child exploitation, rape, sexual assault and harassment at the Postville plant.

Equal Employment Opportunity Commission findings on "the victimization they endured" could help her clients obtain U visas, she said.

Equal Employment Opportunity Commission spokesperson Maria Flores said the agency does not confirm or deny that complaints have been filed.

Immediately after the raid, about 400 immigrant women, children and adolescent males fled to St. Bridget’s seeking refuge as about 900 ICE agents surrounded the plant.

In the months that followed, St. Bridget’s Hispanic Ministry Fund spent up to $80,000 a month for rent, heat, food and medical bills for those detained in Postville, Ouderkirk said.

Various press reports estimate the cost of the raid at $6 million but the federal government did not spend "one cent" to help St. Bridget’s sustain those they detained for the federal immigration trial they no longer intend to hold, Ouderkirk said.

The church remains the clearinghouse for financial, legal, medical and emotional support for the former plant workers and their families. As people have left, spending has dropped to between $10,000 to $20,000 a month but the church still has to find the funds, Ouderkirk said. 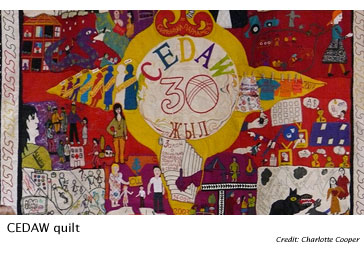