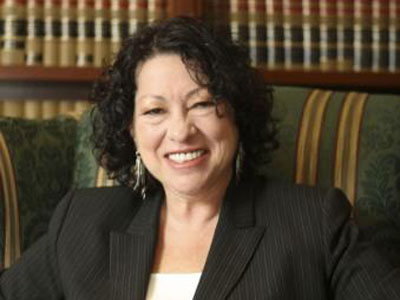 Ginsburg and Sotomayor: What Else in Common?

With Sonia Sotomayor appearing likely to join Ruth Bader Ginsburg and become the second female justice on the High Court, Sharon Johnson looks back over their decisions for clues to their similarities–and differences–on gender issues.

With Sonia Sotomayor appearing likely to join Ruth Bader Ginsburg and become the second female justice on the High Court, Sharon Johnson looks back over their decisions for clues to their similarities–and differences–on gender issues.

(WOMENSENEWS)–Supreme Court nominee Judge Sonia Sotomayor got a bit of a boost July 1 when the Minnesota Supreme Court declared Al Franken, a Democrat who is a former comedian, the winner of a hotly contested Senate seat.

The Democrats now have 60 votes, enough to overcome any possibility of filibuster by Republicans.

That leaves us with the strong prospect of having a third female justice since President Ronald Reagan nominated Sandra Day O’Connor in 1981.

Having a second woman on the court is important to Ginsburg. In a rare interview with USA Today on May 5, Ginsburg said that having one woman on the Supreme Court sends a "disheartening message to young women about whether they can aspire to the post."

But will the two women always see eye-to-eye or occasionally disagree?

My hunch, when it comes to cases of gender discrimination, is some occasional disagreement.

Those areas of difference may become important to the overall balance of the court, since 76-year-old Ginsburg is battling cancer and may be the next judge to resign.

That would leave 55-year-old Sotomayor–who would be the second youngest justice on the court–to do the heavy lifting on equal pay, pregnancy discrimination and other issues for the next 30 years. (Chief Justice John Roberts Jr. is six months younger than Sotomayor.)

In her confirmation hearings, which start July 13, Sotomayor is likely to continue to draw fire from some senators for a comment she made in 2005 that appellate courts make policy.

Here, she might take some pointers from Ginsburg, who deflected similar suggestions at her confirmation hearing when she replied: "From my viewpoint (these gender equality cases) were reflections of social change and putting the imprimatur of the law on the direction of change that was ongoing in society."

Ginsburg, a married mother of two children, left no doubt, however, about her position on Roe v. Wade, the landmark 1973 decision that established a woman’s right to choice in abortion.

At her confirmation Ginsburg said: "This is something central to a woman’s life, to her dignity. It is a decision that she must make for herself. And when government controls that decision for her, she is being treated as less than a fully adult human responsible for her own choices."

I’ll be surprised if Sotomayor says anything so definite next week.

But Sotomayor’s decisions in three cases that touched tangentially on abortion suggest she is far less pro-choice than Ginsburg and Judge David Souter, who she is nominated to replace.

Appointed by President George Bush in 1990, Souter, a former Republican attorney general in New Hampshire, has been a consistent supporter of a woman’s privacy rights. He was a co-author of the decisive three-vote "joint opinion" in the 1992 case in which the court reaffirmed the essential holding of Roe v. Wade.

He also was in the 5-4 majority in a 2000 ruling striking down a law that made some abortions illegal without ensuring that women’s health would be protected. When the Court struck down the law in an almost identical case in 2007, Souter joined Ginsburg in a dissent.

In 2002, Sotomayor upheld a Bush Administration policy of withholding aid from international groups that provide or promote abortion services overseas. "The Supreme Court has made clear that the government is free to favor the anti-choice position over the pro-choice positions and can do so with public funds," she wrote.

Two years later, Sotomayor supported abortion protesters who had claimed that West Hartford, Conn., had used excessive force to break up the demonstration at an abortion clinic. "The protestors deserve their day in court," she said.

She also ruled in favor of several immigrants who opposed being sent back to China because of China’s policies on forcible abortion and birth control.

In 1978, Sotomayor filed a discrimination complaint against a Washington, D. C., law firm for asking a question about the qualifications of Puerto Ricans and other minorities at a recruitment dinner. A student-faculty panel investigated and ordered the firm to write Sotomayor a letter of apology.

That kind of workplace discrimination has been an important issue for the Supreme Court this term.

Ginsburg, a consistent supporter of litigants who have suffered gender discrimination over the years, wrote the dissent in a 7-2 decision on May 18 that employers can pay lower retirement benefits to women who took pregnancy leave before Congress passed the Pregnancy Discrimination Act in 1979 than they pay co-workers who received disability leaves after the law became effective.

Few of Sotomayor’s 380 opinions on the federal court of appeals for the second district have dealt with workplace discrimination.

In 2006, Sotomayor, a divorced woman who has no children, wrote that the federal Age Discrimination in Employment Act did not protect a 70-year-old-male Methodist minister from the church’s mandatory retirement policy because it would entail undue intrusion into religious matters.

The opinion worries advocates for working women because 76 million baby boomers are entering their sixties, and many of them–especially women who work for religious organizations and have limited savings and no pensions–want to work as long as possible.

Sotomayor’s most controversial decision, however, involves the lawsuit by 18 white firefighters, including one Hispanic, that claimed that their rights had been violated when New Haven, Conn., threw out the results of a promotion examination on which few African Americans had scored well because the city feared that it would be subject to lawsuits by minority firefighters.

Two colleagues and Sotomayor on the appeals court had ruled the city did the right thing in throwing out the test. Their decision included only one paragraph of substantive text, which upset their fellow Second Circuit judges. Following a 7-6 decision by the full appeals court against rehearing, the litigants appealed to the Supreme Court alleging reverse discrimination.

On June 29, in a 5-4 decision written by Justice Anthony Kennedy, the Supreme Court ruled that New Haven’s action amounted to discrimination based on race against the white firefighters who were likely to be promoted.

Like Sotomayor, Ginsburg supported the city’s decision, arguing in her dissent that the court should have assessed the "starkly disparate results of the exams against the backdrop of historical and ongoing inequality of the New Haven fire department." In 2003, when the case was filed, only one of the city’s 21 fire captains was African American. 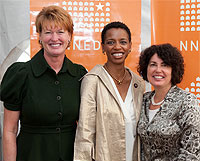