Oprah has called the alleged abuse of a U.S. pop star a “teachable moment.” Stacy Bannerman, whose husband is deployed in Iraq, says the same national instruction is also needed about veteran domestic violence and post-traumatic stress syndrome.

(WOMENSENEWS)–The alleged abuse of pop star Rihanna at the hands of singer Chris Brown is a "huge, teachable moment," according to Oprah Winfrey, who did a show about the topic. Meanwhile, the military community and veterans’ organizations want to improve education and reduce stigma about the effects of post-traumatic stress disorder. Then why are they so silent about PTSD and the escalation of Veteran Domestic Violence?

"Domestic violence among veterans has reached historic frequency," Helen Benedict writes in her new book "The Lonely Soldier: The Private War of Women Serving in Iraq." "And post-traumatic stress disorder rates appear to be higher among Iraq war veterans than among those who have served in Afghanistan or even, many believe, in Vietnam. One of the symptoms of this disorder is uncontrollable violence."

In January of this year, The New York Times reported that charges of domestic violence, rape and sexual assault have risen sharply at Fort Carson, Colorado.

But the fear of repercussions and the immense challenge of going against the Camouflage Code of Silence, which defines the Armed Service’s refusal to acknowledge the war on military wives and women veterans, ensure that most domestic abuse is not reported.

Furthermore, the Department of Defense does not track off-post police reports or claims filed in civilian courts.

Given the unprecedented deployments of more than half a million citizen soldiers who do not live on base, but have nearly twice the rates of combat-related trauma as active-duty troops and are more likely to be married, it seems obvious that the epidemic of veteran domestic violence is significantly higher than reported.

Case in point: Days after selecting her wedding dress, the fiance of a Marine Corp. Reservist with severe, untreated, post-traumatic stress disorder came home to find her apartment on fire, having been torched by her betrothed, after a series of harassing, threatening, and violent encounters. She filed for, and was granted, a restraining order. But she doesn’t count.

The connection between post-war trauma and veteran domestic violence has been extensively documented in earlier wars. Veterans with PTSD are two-to-three times more likely to commit intimate partner violence than veterans without the disorder, according to the Veterans Administration. What remains unspoken is that spouses and girlfriends of male veterans with post-traumatic stress disorder are two-to-three times more likely to be victims of domestic violence than women involved with male veterans who do not have the disorder.

The disregard for domestic collateral damage is evident in this comment from Mike Matthews, a retired Air Force officer studying troops in combat for Army Chief of Staff George Casey. Matthews said soldiers with PTSD "tend to abuse alcohol and their spouses more upon returning from the war zone." Whiskey or Army wife: six of one, half a dozen of the other.

In the past five years, hundreds, if not thousands, of women have been beaten, assaulted, or terrorized when their husbands, fiances, or boyfriends got back from Iraq. Dozens of military wives have been strangled, shot, decapitated, dismembered, or otherwise murdered when their husbands brought the war on terror home. These women are as much casualties of war as are the thousands of troops who killed themselves after combat.

There have been multiple spousal murders at Fort Lewis, Fort Bragg and military bases across the country. The victims are human footnotes, not worthy of a place in the national dialogue about veterans, post-war trauma and domestic abuse.

The men who enlisted knew that putting on a uniform meant being willing to die for their country. But as a military wife, I can assure you that not one of us took an oath at the altar saying that we were willing to die for our country at the hands of our husbands.

There is nothing loving, honorable, or patriotic about taking a beating for your nation. I am appalled at the mentality within military culture and civilian society that seems to believe that talking about one of the most horrendous home front costs of war is somehow unpatriotic and anti-veteran.

Being pro-veteran shouldn’t require complicity with or tacit consent to the increasing incidents of domestic violence, rape, and sexual assault perpetrated by veterans. If domestic violence is never acceptable, then we can’t make exceptions when military wives and girlfriends are the victims.

If we’re serious about addressing domestic violence, PTSD, and taking care of this country’s veterans, then we have to get honest about what’s really going on in military families. Sometimes the truth hurts. But, to quote Oprah, "Love shouldn’t."

Stacy Bannerman is author of "When the War Came Home: The Inside Story of Reservists and the Families They Leave Behind," and the creator and director of Sanctuary Weekends for Women Veterans, and Sanctuary Weekends for Wives of Combat Veterans. Her husband is serving his second deployment in Iraq with the Army National Guard 81st Brigade and she can be reached at her Web site http://www.stacybannerman.com. 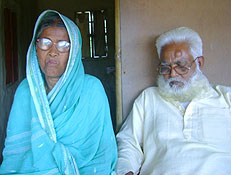