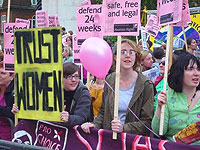 A loss by Britain’s Labour Party earlier this month is emboldening anti-choice activists to study their U.S. counterparts’ playbook in earnest. They hope to make abortion a major issue in the next general election.

LONDON (WOMENSENEWS)–Less than 48 hours after Labour’s parliamentary majority voted May 20 to reject amendments that would have reduced the 24-week time limit for a woman to receive an abortion in Britain, the party suffered a stunning political defeat by losing a seat in their majority.

Following the political playbook of U.S. counterparts, anti-choice activists took it as a sign they could ratchet up the relatively low-key issue of abortion in the next general election, which must be called sometime in the next two years.

"Now the bad fortunes of the Labour Party are due to largely economic reasons, but I have no doubt that abortion will be a major issue at the next election," said Dr. Peter Saunders, the general secretary of the Christian Medical Fellowship, one of 12 organizations in the Alive and Kicking alliance, a British anti-choice umbrella group based in London.

If the same political shift away from Labour occurs in the next general election, Saunders expects to "see a reduction in the time limit to the 22nd week or the 20th week."

His group and others vow to target members of Parliament who refused to lower the abortion time limit.

In line with U.S. counterparts, they have targeted certain areas of the law–including the point of fetal viability–and are organizing their core constituencies through churches and on the Web into a voter base.

Focusing on just when the fetus can survive outside of the womb comes straight from the United States, said Charlotte Gage, a campaign coordinator for Abortion Rights UK, a pro-choice umbrella group in London coordinating the effort to protect the status quo.

"There has been a focus on late-term abortion to confuse the issue," Gage said. "A total of 83 percent say women should have access to an abortion if they wish. So they only attack the only way anti-abortionists can, which is borrowing the tactics from the United States. They start chipping away."

U.S. anti-choice activists have been pushing abortion into the political limelight for decades. The Christian Coalition of America played a decisive role in the Republican Revolution of 1994, a mid-term election in which the GOP wrested control of the House of Representatives by making abortion one of the major issues in the so-called Family Values package of social issues. Since that election judges and even surgeons general have been vetted with abortion in mind during the nomination process.

The U.K. anti-choice coalition is also pressing for election victory.

"Our immediate mid-term goal is to halve the number of abortions in the U.K.," said Saunders. "Alive and Kicking is not a political party. We support all MPs who support our aims and we oppose all MPs who don’t. And we will make it available, the voting record of each MP, on how they voted on the time limit reduction. We have a search facility. It’s only two years at the most until the general election. There are some Labour MPs who will most certainly lose."

An election earlier this month–called to fill a seat held by a recently deceased Labour representative–marked the first time in 30 years that the Conservative Party wrested a parliamentary seat away from Labour, a heavy blow to the ruling party.

Two days earlier, Parliament revisited the Human Fertilization and Embryology Bill to revise and update it, taking in breakthroughs in medical science. Anti-choice legislators took this opportunity to introduce a variety of amendments. The most competitive reduced the abortion time limit from 24 weeks to 22 weeks. Others sought restrictions at 20 weeks, 16 weeks and 13 weeks.

When abortion was first legalized in England, Wales and Scotland in 1968, a woman could undergo the procedure up to the 28th week of pregnancy and as long as two doctors agreed that it was psychologically or medically justified. In a 1990 amendment that limit was reduced to 24 weeks.

Abortion is illegal in Northern Ireland except when the physical or mental health of the mother is severely endangered. While no one has been prosecuted for decades, performing an illegal abortion in Northern Ireland is punishable by life imprisonment.

While all of the proposed amendments to reduce the time limit in England, Wales and Scotland were rejected, the vote was broken down along party lines. The 22-week amendment was approved by 83 percent of Conservatives, while 80 percent of Labour members successfully opposed it.

"The issue this time is about viability (of the fetus)," said Katy Clark, a pro-choice Labour member and a member of the All Party Parliamentary Pro-Choice and Sexual Health Group. "What the anti-abortionists will argue is that there has been a change. They will say now they know more and that there should be a reduction in the time limit . . . Their lobbyists are very organized in the U.K."

The argument that a 24-week fetus can survive outside the womb is gaining traction with some in the British press hopping off the fence and entering the fray.

The week before the parliamentary vote the Daily Mail has run daily front-page stories with headlines such as "We had our babies under the 24-week abortion limit–and they all survived," and "Now NHS doctors refuse to carry out late abortions on moral grounds." The Sun, which has the largest circulation of any daily British publication, ran a story headlined, "Abortion Limit Baby Survives."

This winter anti-choice legislators known as the All Party Parliamentary Pro-Life Group, supported by religious organizations, launched a political action drive called the "Passion For Life" campaign. Since February its organizers have staged rallies in 20 towns and cities from Edinburgh to Torbay and from Belfast to Portsmouth, in an effort to energize their core supporters into action.

Going Into the Countryside

Earlier this spring, Lord David Alton, an independent and one of Britain’s leading anti-choice activists, took the train out of London to Portsmouth to address a crowd of just over a hundred people inside St. John’s Cathedral. He said the campaign’s main strategy was simple: "We’ve got to get out into the country or nothing will change . . . I can’t ever remember a national campaign of this kind before."

Alton told the crowd, "The possibility of banning abortion now–none. We need to reduce abortion. . . The odds are against us for an outright ban. Any incremental improvement is worth fighting for."

Abortion Rights UK said it staged counter-rallies in Britain’s larger cities, such as London, Cardiff, Coventry and Liverpool. There was no counter rally to greet Alton in Portsmouth.

The medical profession has begun to reflect the controversy.

Without revealing statistical evidence, the Royal College of Obstetricians and Gynecologists has warned of doctors opting out of training in the termination of pregnancy and being "therefore concerned about the abortion service of the future."

In Britain women need two doctors’ referrals in order to receive an abortion. A poll conducted by Pulse magazine, a weekly publication for general practitioners, indicated that 24 percent of its respondents said they would refuse to sign referral forms and half said they wanted to see a reduction in the 24-week time limit.

Laura J. Winter is a writer and documentary filmmaker living in London.