Poverty and tradition help fuel a potent business in human trafficking in East Africa, where a girl can sell for $20. Most kidnapped children are not as lucky as Saffi, who returned after her mother bought TV ads. Many disappear without much notice.

(WOMENSENEWS)–For five months last year Kim Kitchen, a Canadian expert on sexual violence and community development, lived in a crowded shantytown on the outskirts of the Tanzanian capital of Dar es Salaam while she set up a women’s safety program. She began to notice that nightfall was an anxious time for mothers.

"One of the startling realities for me was as the sun started to set I observed the women would start calling in their daughters," said Kitchen. "As the sun set more and more, and daughters hadn’t come, the urgency in their calls grew. It was just a matter of fact that every girl has to be in their home after dark."

Across East Africa–once a corridor for merchants trading slaves from the continent’s interior for fine cloth, frankincense and spices from the Middle East–conditions are in place for a boom market in the traffic of human beings. Poverty and instability in the region mean many are desperate enough to trade themselves or their children for a ticket out. Tanzania is no exception.

At the same time, some traditional practices–such as witchcraft and child marriage–are implicated in the disappearances of many young girls.

Kitchen is a trainer with the San Francisco-based organization Girls Speak Out. Its organizers in the United States, Australia, Kenya and Tanzania arrange workshops for girls and women to talk about what it means to be female in their communities. They are meant to give girls a chance to discuss their bodies and traditions in the light of their legal rights.

Kitchen collaborated with local groups based out of the slums who are fed up with watching helplessly as their children vanish.

"They are just groundbreaking kind of people," said Kitchen, referring to their willingness to challenge some time-honored practices that can sometimes be deadly, particularly for women and children. "The majority would say, ‘Why would you do that? This is going against tradition.’"

"If you went to a witch maybe to be wealthy, you take a small baby, a boy or a girl, to offer," said Rutta Thobias, a project coordinator for Dar es Salaam’s Mass Development Association, known as MaDeA, an antipoverty program focused on women and children.

This kind of witchcraft is suspected in the case of a 4-year-old girl, Salome Yohana. Security guards found her severed head in the bags of a boy on his way to visit his aunt at the hospital in late April. The girl’s body was found at a public latrine across town, where someone had apparently tried to dispose of it. Her parents had not reported her missing to police or the press.

"The issue of killing children, especially girls, needs to be taken more seriously," said Thobias, who just days earlier had been drawn into the kidnapping case of his neighbor’s 5-year-old daughter, Saffi.

Saffi’s story was unique and shows the impact work like that of Kitchen and Thobias can have in Tanzania.

Early on the morning of April 1, the little girl said goodbye to her mother and set out for kindergarten, just 600 meters along a dirt path through her neighborhood. Saffi’s family didn’t see her again until seven days later, when she turned up at a bus stop in another part of town, terrified and shivering with malaria. She said she’d been raped.

For her mother and neighbors, the extraordinary thing was not that she’d disappeared but that she’d turned up again at all.

A girl like Saffi is a liquid asset as far as kidnappers are concerned. They can sell her to families eager for cheap house servants, pimps, witch doctors and men seeking virginal brides. In 2003, a girl could be bought for as little as $20 in Dar es Salaam, according to the United Nations.

Children’s parents are often complicit in the deal; sometimes they must sell one child to afford meals for younger siblings during especially difficult economic times such as when crops fail. But even when they aren’t, they rarely go to the police or publicize the case, particularly when the child is a girl and rape may be involved, said Thobias. "Most of the people, after the same incidents happen to them, they believe more in magic power, that if you campaign the kidnappers may kill the child."

But Saffi’s mother, who’s employed by the Tanzanian military to train cadets, was different. She helped Kitchen meet women in Mbagala. She made as much noise as she could, including going to mosques around the city to ask that the muezzins include a description of Saffi in their calls to prayer, and then to local government offices to report her daughter missing. She spent what little savings she had on advertisements and then went to Thobias to ask for more. Within days, Saffi’s face was in newspapers and on television screens.

The media attention made Saffi’s kidnappers decide she was more trouble than she was worth. They put her on a bus. By chance a family friend spotted her, slumped at a busy bus stop miles from her home and called her mother.

The odds that the men who kidnapped Saffi will be found are very low. Because her mother did not report to the police on the night her daughter was found, they say she has no case number and they cannot investigate.

But Thobias has taken the case into his own hands.

"We are fighting to collect information from different people," he said. "But we are trying our very best to look for some way because we see so many issues with children here. There are abuses from all sides. Raping is too much nowadays."

So far, he’s discovered two things. No. 1: the house where Saffi was held was near the airport; she knew because she could hear the sound of planes coming and going. No. 2: She says there were other small children at the house with her. As far as anyone knows, they are still there today.

Zoe Alsop is a freelance writer based in Kenya.

We’re Sending ‘The Memo’ to ’08 Conventions 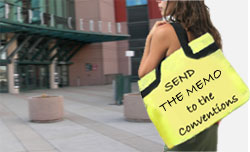