As next Tuesday’s primary in Washington State approaches, there’s one bedrock certainty. The Democratic candidate will be a pro-choice woman.

The only question: Will it be the high-profile insurance commissioner with a fistful of endorsements from labor and women’s groups or the high-profile Internet millionaire who’s been endorsed by every newspaper in five counties?

The winner will face Republican Slade Gorton, elected along with Ronald Reagan and a fighter against reproductive choice, affirmative action and gun control. Last year, he was one of only 15 Senators to vote against the breast cancer postage stamp.

Which Woman on the Road to Washington?

For Deborah Senn, Washington State insurance commissioner, the race began last September–and she felt like a winner. “I was one of the Women on the Road to Washington Tour,” she says, recalling that moment of optimism. The tour took Senn and a few other woman hopefuls on a national swing with five current female Senators, including Washington’s own Patty Murray. Senn felt on track to join them.

“Everywhere I go, working people know who I am. They know I’ll fight for them–and they vote for me.”

Soon, Senn had endorsements from the National Women’s Political Caucus, most of the major labor councils, Democrats on the Seattle City Council, 55 state legislators and numerous Democratic organizations. Her field organization was well in hand, and the Seattle City Paper was calling her “the almost certain nominee.”

Then Maria Cantwell decided to resume a career in public service.

Cantwell had served in Congress from 1992 to 1994, after three terms in the state legislature. When she was swept aside in 1994 by the Contract for America, she went on to co-found the RealNetworks software empire. After five years, however, Cantwell says she saw “how much depends on an educated workforce, infrastructure and access to health care.

“I saw Slade Gorton, with his 19th-century mindset, with no credible challenger.” Of Senn, she says simply, she does not consider her credible. “She was running for a year, and when I got in she and I had the same level of name recognition.”

Cantwell decided to spend her own money–$3.7 million by September 1, a record for Washington State. Most of it funded a summer-long advertising blitz, making up for the late start and establishing Cantwell’s smooth, new-economy persona as an alternative to Senn’s hard-driving advocacy.

Both women are very close on the issues, such as health care, education and the infrastructure needs of high-tech industries. However, Cantwell’s personal fortune has emerged as a big topic, despite the fact that Gorton himself is a millionaire and lavish spender. Also, the two women’s different styles are widely discussed–essentially, what “kind” of person voters want to send to Washington.

Both Senn and Gorton have criticized Cantwell’s use of personal funds. “I find it disturbing that there is only going to be room for millionaires in the Senate,” Senn told The Seattle Times editorial board last week. To Cantwell, her personal fortune enables her to “talk to people about solutions, not to organizations about money.”

Both the polls and newspaper endorsements have now established Cantwell as the Democrat to beat. An August Elway Research poll showed Cantwell and Gorton tied at 40 percent in a one-on-one race. In a three-way poll, Gorton had 37 percent, Cantwell 30 percent and Senn 12 percent. Meanwhile the Seattle Times, the Seattle Post-Intelligencer and other papers have lined up behind Cantwell. “This is a race between a confrontational populist consumer champion and a seasoned, politically savvy new Democrat known for her ability to work across party lines,” said the Post-Intelligencer.

For Senn, 13,000 Contributors and an Army of Foot Soldiers

Senn speaks dismissively of Cantwell’s advantages. “She’s a TV candidate,” she said. “I’ve been elected twice statewide with over a million votes. She has fewer than 1,000 contributors. I have 13,000. People support me because I’ve delivered for them.” She points to her ability to secure Washington’s strong patients’ bill of rights, as an example of leadership. On women’s issues, she represented the state’s battered women’s shelters in a lawsuit, and commissioned the first-ever study on the reproductive health effects of health insurance discrimination.”

For her part, Cantwell speaks proudly of joining the record number of women entering Congress in 1992, and of what they were able to accomplish in two short years.

“Funding for specific research on women’s health–we did it. The Family and Medical Leave Act–we made it law.”

Whatever the outcome of the primary, national women’s organizations hope races like this become the norm. “I think it’s great,” says Sheila O’Connell, political director of EMILY’s List, which funds pro-choice women. “We know a pro-choice woman will be nominated.”

Holding onto that good feeling may be harder than expected, however–as the winner faces an entrenched incumbent who has pledged to spend $8 million to keep his seat. “Gorton always grossly outspends his opponents,” said Washington Democratic Party Chairman Paul Berendt. “That’s not going to happen this year.”

Chris Lombardi is a free-lance writer based in New York and covering politics, human rights and international issues. 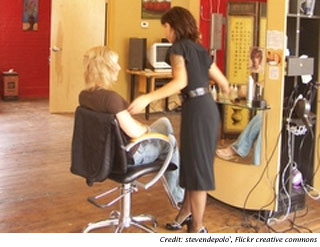