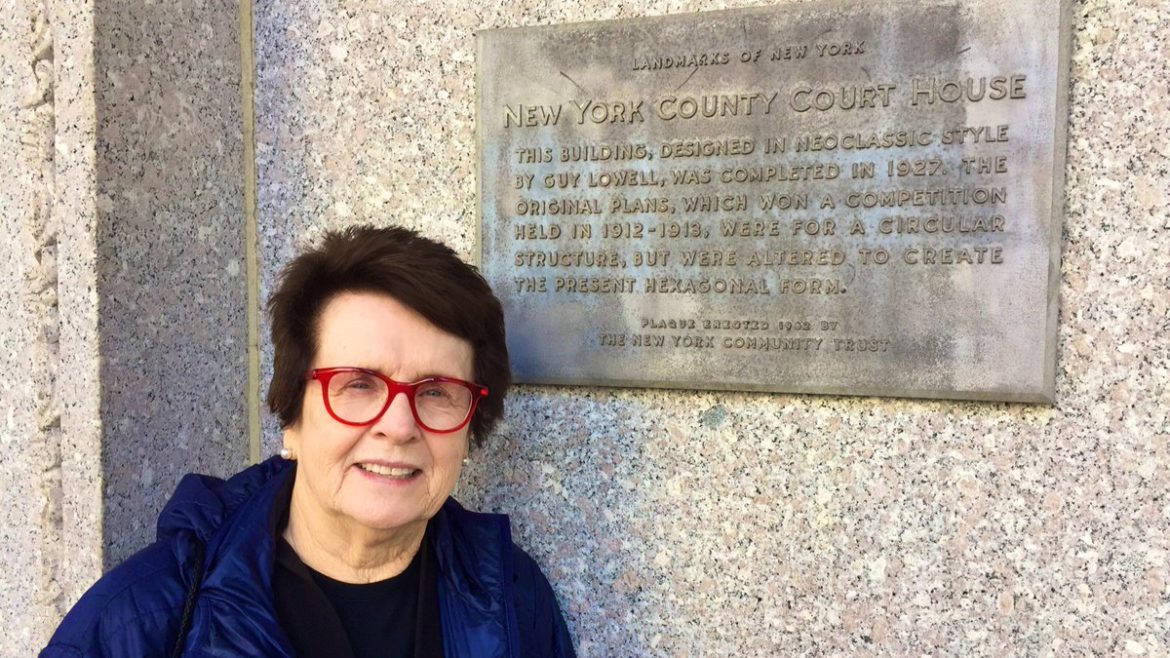 @BillieJeanKing tweeted: Visited the courthouse to report for jury duty today. Such an important part of being an American citizen!#civicduty

What were the odds of my being summoned to attend jury duty in a Manhattan courtroom, which I’ve postponed three different times over the past three years, the same day Billie Jean King would as well? What were the odds that with dozens of other people waiting outside the twelve-foot high wood doors to open at 9:00 am, I would walk past them to turn around the hall corner in search of an empty bench to sit, and find one where Billie Jean King was standing beside it? What were the odds of this happening while I am in the midst of writing my book, She Is Me: How Women Will Save The World, in which one of the thirty-five women included in the book is Billie Jean, herself?

Call it what you want….I could have not been more surprised!

But I should not have been at all surprised that she immediately remembered me after introducing myself, having written two articles about her for The Huffington Post, one at the beginning of 2017 and one at the end.

Both times I interviewed her, I was amazed by her humility, modesty and warmth. During our second interview, she even asked me more questions about myself than I asked about her. Yesterday was no different.

I do not think it would have mattered if she recognized me as someone she knew previously as a journalist, or whether I was just a fan – she would have treated me with the same level of interest and respect.

I know this because, yet again, she displayed that same level of respect for others I had previously witnessed – courteous to all of the staff in the courthouse, asking each one for their name to thank them personally for any assistance they provided, and responding very respectfully to a woman who walked by her while shouting, “Are you a look-alike, or the real one?” When she gently responded, “I’m the real one,” with a chuckle, the woman kept walking, disbelievingly. Assuming she wouldn’t want to be recognized due to shout-outs like these, I asked her why she didn’t wear sunglasses instead of clear glasses to hide her identity. “Why would I?” she responded, not caring to conceal who she truly is, whether believable or not.

As we stood together for over an hour on line, hoping to postpone our jury duty summons just one last time (she would be flying to San Francisco on Friday, and I to Toronto) she spoke of many things; the need for the courthouse to accommodate people with disabilities with more available ramps and seating, her intention to serve as a juror when she has the time, and what she believes to be the biggest barrier to electing a woman president in the US.

“People think that when women lead, whether it be a country, a company or a corporate board, they are only going to do things to help other women, which couldn’t be further from the truth” she said. She compared it to people thanking her for what she did for women’s tennis. “I don’t want people thanking me just for what I did for women. I want people to thank me for what I did for everybody in the sport, regardless of gender.” She continued: “When you’re the president, you’re leading the entire country. People need to understand that this is what a female president will do.”

She also talked about the problem with women being taught to be perfect while men are being taught to be brave. “This has to change,” she said, “because it limits both women and men.” She also made a point of citing two things about successful businesswomen that few people know: “Ninety-four percent of women who hold C-suite level positions are former athletes, and the more women that are on the boards of global companies, the higher that company’s financial performance.” That’s why when companies report that they want more women on their boards only for equality’s sake, she doesn’t believe them. “They need to understand the true benefits of women serving on boards, and how it helps their bottom line. If not, these companies really won’t change anything,” she said.

As we inched further to the front of the line, she then reverted back to the issue of our next presidential election, and about voting in particular. “We have to make sure kids vote, so we need online voting since too many of these teenagers don’t want to take the time to go to a voting location,” she continued, “It’s all about the next generation, and paying attention to their needs, not ours.”

She then focused back on me, wanting to know more about my work, and asked whether I was ever the subject of an interview. “I had an article published about me in Forbes, just a few days ago,” I proudly told her. She immediately asked me to send it to her.

And with that, we finally became first in line. She insisted I go ahead of her, even though I initially refused. After I presented my paperwork, I was asked to wait on yet another line, but Billie Jean was told she could leave, since she is now over seventy-five years old, past the required age to serve as a juror. She thanked the woman behind the desk, whose name I learned was Juanita, since Billie Jean asked for her name too, so she could thank her personally. Before she left, she gave me a hug while telling me how much she enjoyed our discussion, before saying, “You know, I do plan to volunteer once I have the time. I will never shirk my duty.”

And I believe her.