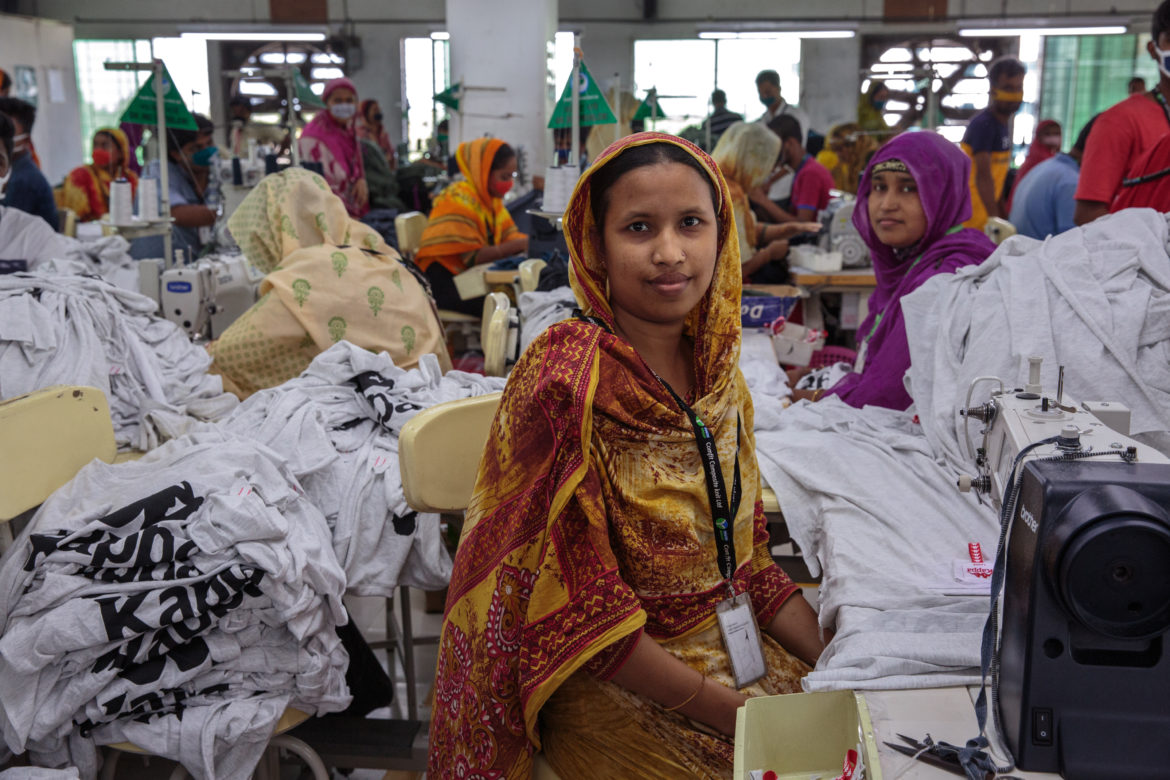 Chances are that the clothes you are wearing as you read this were made by a woman. Chances are that she lives in Asia and migrated from a rural area to a big city to work in a garment factory, a job she considers better than anything she could find in her hometown. Chances are also that at this “good” job she is not making a living wage, is experiencing some form of harassment or violence, and fears being fired.

Approximately 75 percent of the world’s garment workers are women, making the fashion industry a powerful employer with a powerful economic force. Valued at 2.4 trillion, the fashion industry would be the globe’s seventh largest economy if ranked alongside countries’ GDPs. Despite the industry’s profitability, its workers are among the least protected or compensated. A garment worker in Delhi compared their low and inconsistent pay rates “like we are vegetables; our prices vary.”  Pervasive gender discrimination on top of garment workers’ temporary work status leaves women workers vulnerable economically and physically.

Six years ago the world awoke to one of the acute dangers in the fashion industry when Rana Plaza – an eight-story building housing clothing factories – collapsed in Bangladesh, killing over 1,000 people and injuring 2,500 others. It was the deadliest garment factory accident in history.

Since the factory housed a number of US and European brands, the magnitude of the tragedy led to a groundswell of activism. Following global protests and outcry, global brands signed two agreements mandating more robust fire and structural safety standards in factories.

Still, structural building hazards are far from the most pervasive dangers women face in the garment industry. One of the most insidious threats to women garment workers is gender-based violence. This takes many forms, from outright sexual violence and harassment to physical abuse, inappropriate touching, and verbal abuse. Despite the #MeToo movement, however, we yet to hear their stories, but women’s-rights organizations and activists are working to change that.

Organizations of women garment workers are looking to spark change

At Global Fund for Women, we support some of the organizations working with women garment workers through an initiative funded by C&A Foundation and NoVo Foundation, to eradicate gender-based violence and empower women garment workers in Bangladesh, Cambodia, India and Vietnam. These women-led organizations are creating safe spaces for the women workers to come together to share their experiences, document abuse, and strengthen their leadership to advocate for their rights. Through increasing mobilization and organizing, women are being encouraged to join and lead trade unions; police and labor officials are being sensitized on the issue; and through negotiations with factory managers, mechanisms for safe reporting and response and being created inside the factories.

These organizations, and others are helping to build an understanding and awareness of what sexual abuse and harassment is for both the women workers and factory management. They are gathering documentation of the cases and data on how widespread gender-based workplace violence is for evidence-based advocacy.

Social norms and the pervasiveness of gender-based violence can prohibit it from being recognized as such. Further, the shame and stigma associated with harassment, particularly sexual harassment, and fear of reprisals at work prevent women from making formal complaints despite its high prevalence.Still, we know that in India 60 percent of female factory workers reported experiencing some type of harassment. In Bangladesh, 75 percent of women garment workers experienced verbal abuse, and 20 percent experienced physical abuse, according to Fair Wear Foundation.

Maheen Sultan of Naripokkho, a women-led organization that began working with female garment workers after the Rana Plaza disaster, explained, “This is such an important area to establish women’s rights, with more women coming into the formal sector and with all the different kinds of rights violations taking place.”  She also emphasized that living free from violence is a predicate for establishing other rights. “Gender-based violence is not isolated to factories, or localized to workplaces; it’s woven throughout the lives of women. They experience it when they travel to work on public transit, in schools, and often at home,” Maheen says.

Change is slow, but there are encouraging signs. From grassroots to policy, the number of women leaders and members of the trade unions are growing; India law has mandated Internal Complaint Committees at the workplace; Cambodia is negotiating an industry-wide collective bargaining agreement; factories in Bangladesh are partnering with women’s rights organizations to allow worker trainings on sexual harassment; and a new and pending International Labor Organization (ILO) convention on ending violence and harassment in the world of work – the first international standard of its kind – is expected to be voted on in June. An international universal definition on harassment and violence in the world of work planned at the ILO convention in June) would set the stage for its ratification and the development of national policies and laws.

Change is possible and will require political will, as shown in the wake of the Rana Plaza collapse. It will also demand a human rights commitment from consumers, factories, brands, and governments. Above all, it will require the courage and voices of women garment workers and activists.

Sonia Wazed, of the Society for Labour and Development in India, explained, “Developing women leaders to claim their rights and that of their fellow members is a long drawn journey where women need to start questioning their perceptions of patriarchy, how it impacts them as workers, and why they need to challenge the existing norms that repress and violate their rights.”

About the author: Sangeeta Chowdhry is the Senior Program Director for Economic Justice at Global Fund for Women. She has worked on women’s empowerment and rights over the past decade with a focus on economic and environmental justice issues.