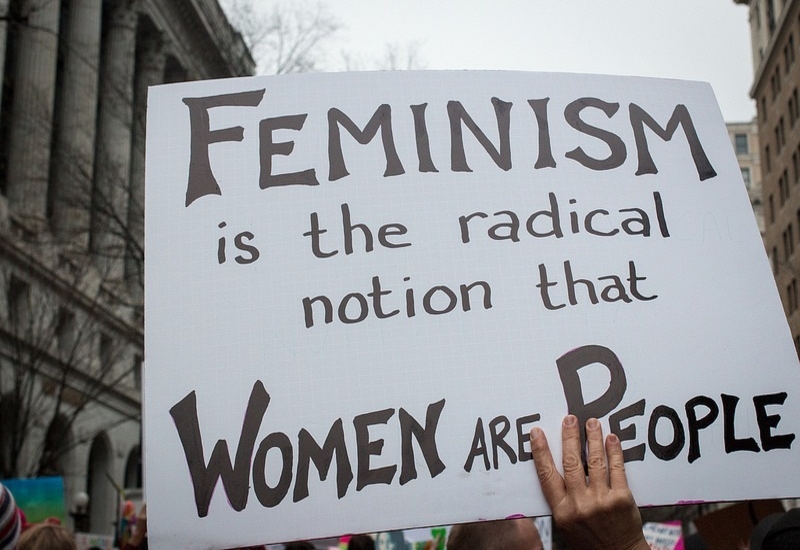 (WOMENSENEWS)—The soundtrack of my childhood is Tanya Tucker belting out “Delta Dawn,” a song about a 41-year-old woman destined to walk the streets of town because a man of low degree left her, and radio talk show host Rush Limbaugh raging against “feminazis.”

I am always amazed at the deep contradictions on gender I learned as a child. I was listening to Rush’s (my household felt we were on a first name basis with him) strident lectures on the pettiness of feminism as my deeply involved father would drive me to baseball practice, where I was the only girl on the team. My first day of practice I got cracked on the head with a fly ball. No moms in sight, I still remember how impressed and relieved all the dads were that I didn’t cry. I was surprised they didn’t discourage me. They sent me back in the field with a pat on the back and a growing egg on my head.

My father exposed me to what the world thinks of women who fight too hard for equality, but also raised me to be strong enough to be one of those women. It’s the same tension I still feel today as I dedicate my career to women’s rights.

Sexism is an odd form of discrimination. It doesn’t always feel pernicious or bad. It can happen in the course of a conversation that otherwise feels progressive, originate from someone you care about deeply who supports you whole-heartedly or occur in a space you generally regard as safe. And, if you raise concerns in those moments, it can feel petty—as Rush told me over the airwaves it was.

But gender discrimination is pernicious, and we have to address it in the smallest of forms if we are ever going to be able to address it in its worst forms—gender-based violence, sexual harassment, child marriage, among others.

Women around the U.S. and world will be opting out of paid and unpaid work today. “A Day Without a Woman” is “recognizing the enormous value that women of all backgrounds add to our socio-economic system–while receiving lower wages and experiencing greater inequities, vulnerability to discrimination, sexual harassment and job insecurity.” Others will wear red in solidarity.

It’s a moment for all of us, with all of our own complex histories and feelings about gender discrimination and feminism, to pause and ask difficult questions. What are the laws and policies and small forms of gender discrimination that hurt women? What would the world look like if businesses and lawmakers worried as much about women as they do about the economy? What is the economy without women? What is an economy that supports the rights of all women?

Pundits are telling us that the U.S. is currently a nation divided, as if this is something new or something irreparable. Women, and other marginalized communities, living in the U.S. will scoff at the suggestion. Communities, homes, schools, sometimes even baseball fields have long been divided by gender and other forms of discrimination. And, yet, they have existed, found common ground and moved forward, sometimes in fits and starts, but forward nonetheless.

When enough people start asking these tough questions enough times it leads us all even closer to common ground. Will employers around the country be shouting women’s rights are human rights today in response to the strike? Maybe not today, but we are playing the long game.

My father and I agree on almost nothing, except how much we love each other and our family. If he can understand a policy or law is good for me or my family, I hope and believe he would see it as a good policy or law even if at its core it doesn’t quite fit his ideological leanings. Will my dad be wearing red today? In addition to listening to Limbaugh growing up, I also learned a little bit about poker. And, I’ll take that bet.