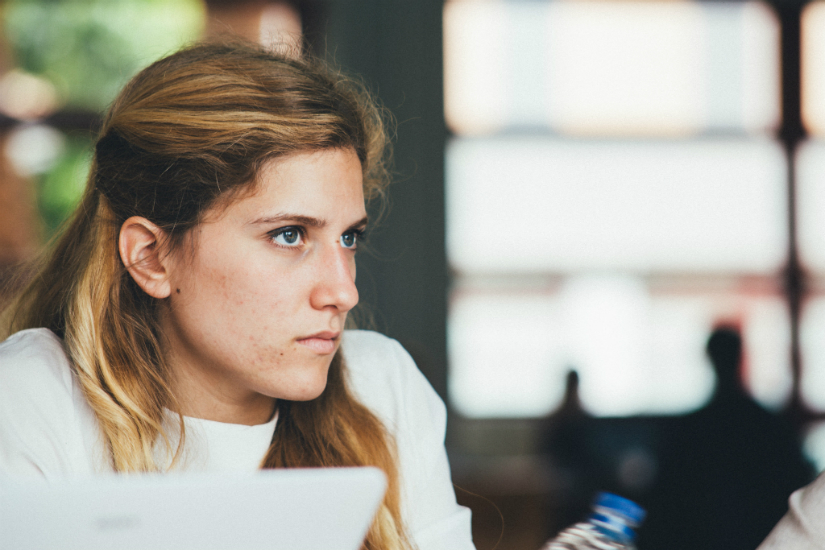 COLLEGE PARK, Md. (WOMENSENEWS)– During her freshman year at University of North Texas, Heather Reed was eating lunch with her friends, when the topic of abortion came up. Everyone at the table agreed it should be a woman’s right to choose. Everyone except Reed.

“All these people just looked at me and they just lost it,” says Reed, who is majoring in photojournalism and political science and now starting her junior year. “I’m used to having a conversation [but] there was no concession on either side, and it was just this rude awakening where I realized that the people around me weren’t afraid to shut me down.”

The sophomore at the University of Maryland, who spoke recently to Teen Voices, says she often avoids participating in discussions in her government and politics classes–her major–for fear that the conversation will turn into “the whole class versus me.”

Instead she doesn’t say anything. “Because I witness a few other people that’ll say something that goes against what everybody says and they get shut down. So I don’t want that to be me.”

Both Reed and Steuart say that, fortunately, they have found friends with whom they can disagree.

“My friends are really respectful of it. They kind of just know like, ‘there’s the conservative,’” Reed says.

Some of her classmates tell her she’s setting women back 20 years, when she says her dream job is to be a mother, but she disagrees.

“The women’s suffrage movement was great. I think it needed to happen. I think we all should vote,” Reed says. While she supports workplace equality she thinks it is disrespectful to tell girls it’s bad if motherhood is the only thing they aspire to.

Taylor Webb, a University of Kansas sophomore, also feels like she is expected to take the liberal side on social issues.

“I feel like I’m not ‘liberal enough’ in those issues, too,” the music education major said.

Young conservatives on college campuses say the criticism doesn’t just come from other students. It also comes from adults.

Webb took an English class last semester with a “very, very liberal” professor, who would constantly express his opinion on current events.

“I felt like [he] threw his views in our face a little bit just because he did it every day,” Webb says. “It’s very clear that if you don’t feel the way he does, you might as well just not say [anything].”

Kristi Henderson is director of communications for Kansas University’s College of Liberal Arts and Sciences. “We do encourage open discussion among faculty and students, however, we also expect that such conversations will be respectful,” she says in an email. “If students have concerns about how a professor conducts class discussion, they are encouraged to talk with their professor, a department chair or an advisor.”

Putting the onus on students can be tricky, says Ashley Thorne, executive director of National Association of Scholars, a membership organization that publishes a journal, Academic Questions.

“I see this as very destructive for what higher education should be,” says Thorne, who spoke recently by phone. “You should go to college to not only challenge yourself and your ideas, but [to] seek the truth and the only way…is by hearing a full range of arguments on different sides.”

Naomi Grant is a government and politics major at the University of Maryland. She enjoys long walks from her dorm to both her journalism class and Diamondback meetings.