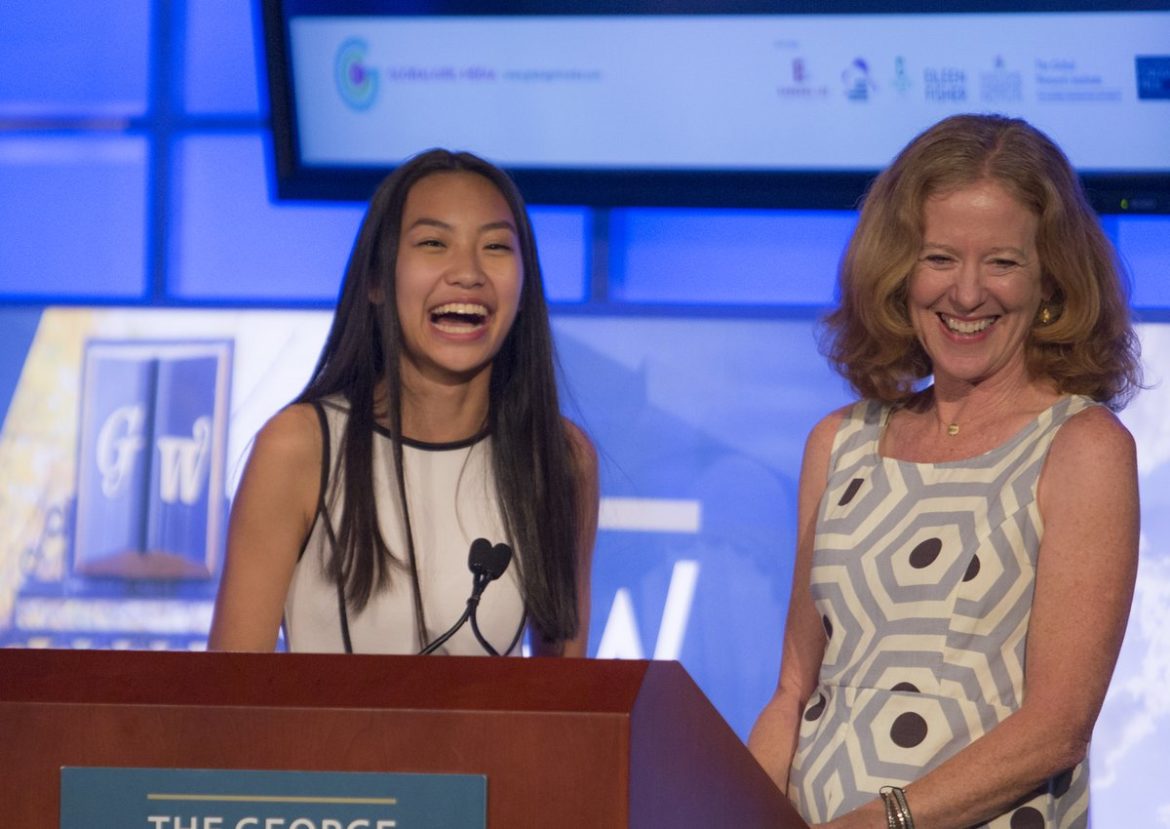 Washington, D.C. (WOMENSENEWS) –Rape culture. Education. Media representation.These are a few of the issues that made it onto the #GirlsGovern Bill of Rights, a list of issues presented in at George Washington University last week at an event hosted by the international youth media organization GlobalGirl Media.

The nonpartisan “Own the Mic” town hall was designed to provide a platform for girls to get involved in the national election, even if most of the 200 participants won’t be old enough to vote in November. It was the culminating event in the GloblaGirl’s #GirlsGovern initiative, which launched in June.

For Annie Lu, 16, one of the most pressing issues facing girls in Northern California, where she lives, is rape culture. In a video she made as part of a #GirlsGovern contest, she focused on how stronger laws and enforcement of sexual assault would make sure girls were safe in the streets and at school. Her video won first place, earning her a free trip to the D.C. event.

Access to education and employment brought Emily Buckley, 17, here from her home in Glenelg, Md. “As a female wanting to go into engineering, I’ve definitely felt a lot of discrimination and judgement from people when I tell them I’m going into a STEM career,” Buckley, a writer for Womxn Magazine, an online magazine by and for adolescent girls, said. “Women’s equality and the things that we were talking about in this event are really relevant to my life and what I want to do.”

Equal parts non-partisan rally and inspirational gathering, “Own the Mic” highlighted women and girls who could serve as role models for the audience members, including Ashlee Wilson Hawn, a former Miss Georgia Teen and reality TV show star turned entrepreneur. Hawn talked about starting her beauty company Boss Babe Body, which sells moisturizer, the day after she ended what she referred to as “a very turbulent relationship” with her boyfriend. That was two years ago. Now her products sell in 11 countries.

This “If I did it, you can do it” message resonated with Madeleine Ho. The 16-year-old from Columbia, Md., is one of two girls in her physics class of about 30 teens.

“A lot of times people doubt my abilities and it’s just really nice to hear a woman come out successful and share her success,” Ho said.

Many in the audience came as groups with girl serving organizations they are affiliated with, others, like Misbah Farooqi, came as individuals. Farooqi, 17, an aspiring journalist, came from Columbia, Md., to learn to produce better content for Womxn Magazine, which she started.

“I just wanted to come to an event where I could talk to other people who cared about the same issues I care about,” Farooqi said.

Naomi Grant is a government and politics major at the University of Maryland. She enjoys long walks from her dorm to both her journalism class and Diamondback meetings.