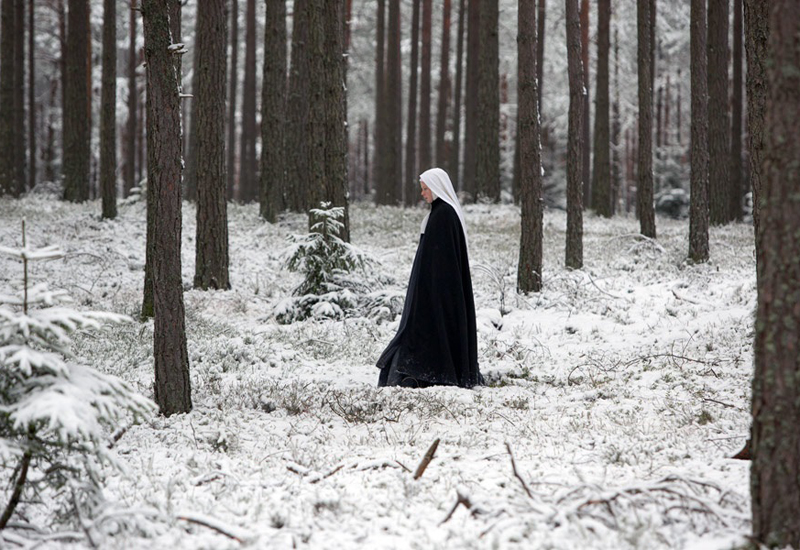 "The Innocents," which opens today, is directed by Anne Fontaine.

(WOMENSENEWS)—My top pick for movies opening today, July 1, is “The Innocents” (aka “Agnus Dei”). Directed by Anne Fontaine, who also co-wrote the screenplay, it’s a truth-based story about Matilde (Lou de Laâge), a French doctor who, while on a post-World War II Red Cross mission in Poland, comes to the aid of nuns there who’d been repeatedly raped by occupying soldiers who’d taken over their convent. Several of the Polish nuns became pregnant. The Mother Superior (Agata Kulesza), who has been infected with syphilis, feels she cannot report the rapes to her superiors as she fears that because the nuns in her charge are no longer virgins, the convent may be shut down. Fontaine, cinematographer Caroline Champetier and editor Annette Dutertre show tremendous sensitivity and skill in their handling of this absolutely devastating story and all of the issues it raises. Performances from de Laâge and the ensemble are deeply affecting. This horrifying story of the past has huge resonance for women today. It’s a must-see. In French, Russian and Polish, with English subtitles.

“The BFG” is Steven Spielberg’s adaptation in hybrid animation of Roald Dahl’s classic book about an orphaned girl (Ruby Barnhill) who BFFs a Big Friendly Giant (Mark Ryland). Together they venture forth into a phosphorescent and magical world of dreams, where they encounter and conquer challenging situations and bolster each other to overcome their fears. The soulful, ageless story is faithfully told in the late Melissa Mathison’s screenplay and luminously realized via Disney graphics and effects. Confrontations are handled gently, not through violence. It’s not too scary for kids and the nuanced performances are truly engaging. “The BFG” is this summer’s family blockbuster, an entertaining escape into fantasy that can open the door to contemplation of and discussion about the real world’s stressful issues. Bring the kids and talk with them about this film after you see it.

“Our Kind of Traitor” is a slick cinema adaptation of John le Carre’s spy thriller about a staid poetry professor (Ewan McGregor) and his lover (Naomie Harris). While vacationing the two become entangled in intrigue involving an M6 operative (Damian Lewis) and a money launderer (Stellan Skarsgard) who’s high up in the Russian mafia. The plot progresses apace with threats of violence to family, implications of crooked government officials and other twisting le Carre trickery to keep you engaged. Director Susanna White nails le Carre’s tension-filled ambience, psychological subtlety and dynamic trail-of-clues style that render cinematic adaptations of his work so enthralling. “Our Kind of Traitor” keeps you guessing until the end.

“The Purge: Election Year” is a futuristic femme-centric political thriller based on the premise of an annual purge day during which law and order cease and the masses are mandated to go into the streets to act out their criminal instincts and desires – often with extreme violence – without fear of punishment. Rising above this horrific societal blood-letting precept, Sen. Charlene Roan (Elizabeth Mitchell) bases her presidential campaign on promises to expunge the purge, and opponents of her plan are out to purge her. What happens when she and her security officer (Frank Grillo) have to hit the streets?  No spoilers. See the movie to find out. Stylish camera work and slick effects make this a fun watch for those who don’t cringe at extreme violence in movies. For those who do, be prepared for a lot of cringing.

“Satanic” is the week’s femme-centric horror flick. The story revolves around four friends on a road trip who detour to Los Angeles to visit crime sites noted for occult occurrences. They befriend a mysterious girl who conjures evil spirits. Once released, the spirits don’t want to leave – not, at least, without taking with them this band of curious tourists of occult locations. The film’s a gripping L.A. scenario. Now and again it gets a bit hokey, but “Satanic” is full of scares if you’re in that sort of mood.

“Microbe & Gasoline” is a delightful charmer of a coming-of-age tale written and directed Michel Gondry. The story centers around two outcast lads – one nicknamed Microbe (Ange Dargent) because he’s small for his age, and the other scornfully called Gasoline (Theophile Baquet) because he smells like his dad’s auto repair shop — who team up to ingeniously build a car that’s disguised as a shed. They use the car to run away from their rather dysfunctional homes for a summertime adventure, which includes a visit to an alluring classmate who’s vacationing with her family at the seaside. While providing rare insight into the way kids’ minds work and how they strive to become part of the adult world, the film is funny and poignant in a way that’s all its own. One of the year’s best, so far. A must-see. In French, with English subtitles.

“Life, Animated,” Roger Ross Williams’ inspiring and informative documentary, is a superb illustration of the way in which movies can shape the lives of audiences, particularly children. The story is about Owen Suskind, diagnosed in his infancy as autistic, who at age 3 learned how to communicate with other people and to successfully interact with them by imitating Disney animated characters. In the film, experts comment on how this happened, but the most interesting interviews are with Suskind, who is now 24, living semi-independently and still citing lines from “The Little Mermaid.” Also compelling are his devoted parents, Cornelia and Ron Suskind, a journalist who wrote the memoir upon which the film is based. It’s good to know that Disney has supported the film, allowing the filmmakers to use clips of Suskind’s favorite characters – sidekicks, mostly – as the documentary’s connective tissue. You’ll appreciate the clips from a new perspective. See the film and spread the word to all who have connections to someone with autism. The film is highly entertaining and quite instructive.

“Roseanne for President” is a documentary about comedienne Roseanne Barr’s stand up presidential campaign. It was back in 2012, when Barr lost the Green Party nomination to Dr. Jill Stein, and then tried for the Peace and Freedom Party ticket. The film is a fascinating reveal about American politics, Barr’s mindset and the use of celebrity as a platform for opinionating. Director Eric Weinrib sets the campaign in the context of Barr’s dwindling fame and the nation’s socio-political concerns. In on camera interviews, Michael Moore and Rosie O’Donnell express their perspectives on Barr’s race for office. Barr is in-your-face funny, and her off-the-cuff comments come very close to sounding like gospel.

Stay tuned for more reviews and movie news next week.