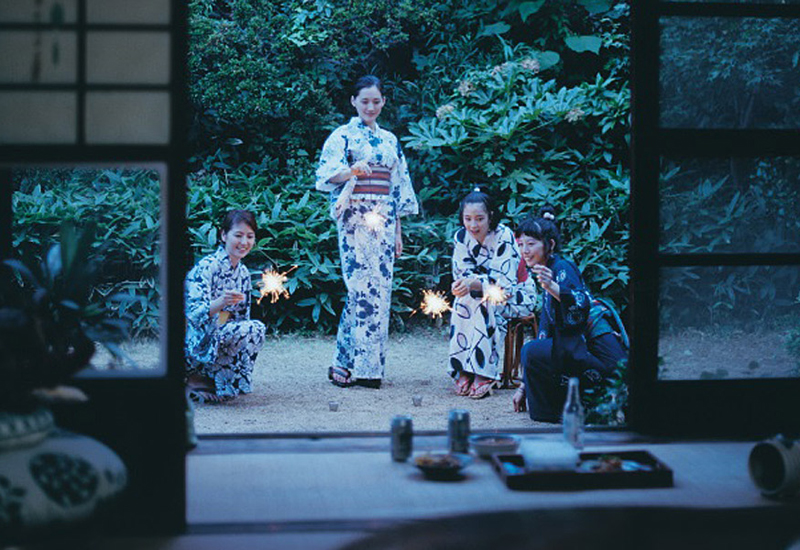 “Our Little Sister” is a live action adaptation of the manga “Umimachi Diary.”

(WOMENSENEWS)—One of the must-see movies opening today, July 8, is “Our Little Sister.” The film is Hirokazu Koreeda’s live action adaptation of Akimi Yoshida’s serialized manga “Umimachi Diary,” a femme-centric coming-of-age story about the goodness of sisterhood.  Three 20-something sisters — Sachi (Haruka Ayase), Yoshino (Masami Nagasawa) and Chika (Kaho) — residing in their deceased grandma’s house decide to take in and care for their teenage half-sister, Suzu (Suzu Asano), whom they meet at their estranged father’s funeral. The decision, made without much drama, opens the door for us to follow the sisterly relationships as they develop and deepen, and as Suzu becomes part of the community. In subtly shaping and revealing the women’s psyches, “Our Little Sister” achieves an affecting magical mystical quality that’s rare in live action movies based on graphic novels, which most often revel in superhero exploits or reprise dark crime antics. The loveliness from beginning to end will leave you longing for more, and hoping for other such samples of what might be.

“Captain Fantastic” is another exploration of family values and how parents influence their children’s behavior. Written and directed by Matt Ross, the film stars Viggo Mortensen as Ben, a free thinking father of six who’s raising his kids in the Pacific Northwest’s remote woods, teaching them survival skills and honing their intellects with highbrow literature. When the children’s mentally unstable mother commits suicide, Ben packs them into the refitted school bus that serves as their wilderness home and takes them to town for their mother’s funeral. There the kids encounter a “civilization” for which they are entirely unprepared and meet mom’s dourly conventional parents (Frank Langella and Ann Dowd), who take a dim view of Ben’s parenting strategies. The story’s premise is interesting enough and the performances are good, but this film, which has a good measure of satire, never quite captures the underlying angst of the children who have some real issues about how to become adults.

“Fathers and Daughters” plumbs that titular relationship, following the life-long anxiety-clad interactions between Jake (Russell Crowe) and his child (Amanda Seyfried as the adult Katie, and Kylie Rogers as the young girl). The film is filled with histrionics and plays like a sentiment-saturated soap opera. Not worth the time or money, unless you’re addicted to movie treacle.

“Ovation” is indie director Henry Jaglom’s latest film, a femme-centric character driven drama starring Tanna Frederick (Jaglom’s wife) as Maggie, an actress caught in the throes of choosing between two career opportunities. Will she stay with a theatrical production that her performance is holding together, or will she opt to join the cast of a new TV show to play opposite its lead, the charismatic and seductive Stewart (James Denton)? The performances are terrific, and the clever script is ripe with insight, humor and engaging oddities, such as a backstage tarot card-reading medium who propels the plot and adds intrigue to burgeoning relationships.  Lots of applause for “Ovation.” It opened July 7.

“The Dog Lover” is a femme-centric animal rights drama that focuses attention on the cruel conditions that prevail in puppy mills where designer dogs are bred. Sara (Allison Page) goes undercover for the United Animal Protection Agency, a fictitious PETA-like group, to obtain evidence against a hunting dog breeder. Her romantic entanglement with the breeder’s son puts her mission at risk. The story is well told, if a bit predictable, and the film is an audience pleaser; it’s especially good for kids.

“Norman Lear: Just Another Version of You” covers the career and pays tribute to the producer who introduced social satire sitcoms to network TV. The filmmakers, Heidi Ewing and Rachel Grady, are acclaimed for compelling and even-handed investigations of crucial socio-political issues, such as religious fanaticism (“Jesus Camp”), abortion rights (“12th and Delaware”) and urban decline (“Detroit”). For this documentary, they take a lighthearted approach to the entertaining subject of Lear. They engage George Clooney and Jon Stewart to speak about the influence of Lear’s shows – “All in the Family” and “The Jeffersons” top among them – on mainstream American culture, and they invite Lear, now in his 90s, to recollect his desire to skewer the political right and bigotry. Although the doc makes scant mention of past criticism about Lear’s ethnic and racial stereotyping in the shows, several classic clips used in the film illustrate that critical point of view.

“Under the Sun” is a rare and galvanizing glimpse of life in North Korea. Filmmaker Vitaly Manskiy follows Lee Zin-Me, a charming little girl who wins a place in a Spartakiada, a Soviet-inspired ritualized cultural and sports event. She is plucked from her daily routine and relatively grim reality for a year of indoctrination and training to be a representative of the country’s official culture and political system, which surreally proclaims itself to be the happiest on earth. The controlled milieu and its contradictions are stunning. The film, in some ways comparable to Ewing and Grady’s “Jesus Camp,” raises urgent questions about where this sort of systematic brainwashing will lead. The doc opened July 6.

“Indian Point” is filmmaker Ivy Meerpol’s well-researched and timely investigation about whether nuclear power production is safe, particularly at the Indian Point plant in Buchanan, New York. Constructed in 1962, with now outdated technology, the plant is still in operation although its Nuclear Regulatory Commission granted licenses have expired and the plant owner’s application for renewal will not be decided until 2017.  Renewal is a political hot potato, with debates about public safety vs. public energy needs clearly stated in the film and at a stalemate. Although the Indian Point reactors are under constant scrutiny and continual repair, is there a chance for disaster? You bet. See this film for the full picture, especially if you live near Buchanan, which is just 35 miles north of New York City.

“Zero Days” is prolific filmmaker Alex Gibney’s informative look at Stuxnet, the self-replicating computer malware that the U.S. and Israel used to wage cyberwar against an Iranian nuclear facility. It worked. But, as revealed in the documentary, the virus’ potential to target and shut down a company or nation’s entire operating system is absolutely terrifying.  Gibney bolsters this documentary thriller with testimony from coders, bureaucrats and an unnamed whistle blower at the National Security Agency. The documentary pushes the envelope on free access to information on government undertakings and vividly reveals the dangers of Stuxnet and other such malware. But it leaves you wondering what, if anything, you can do to seek or demand protection against them.

Stay tuned here for next week’s reviews and movie news.