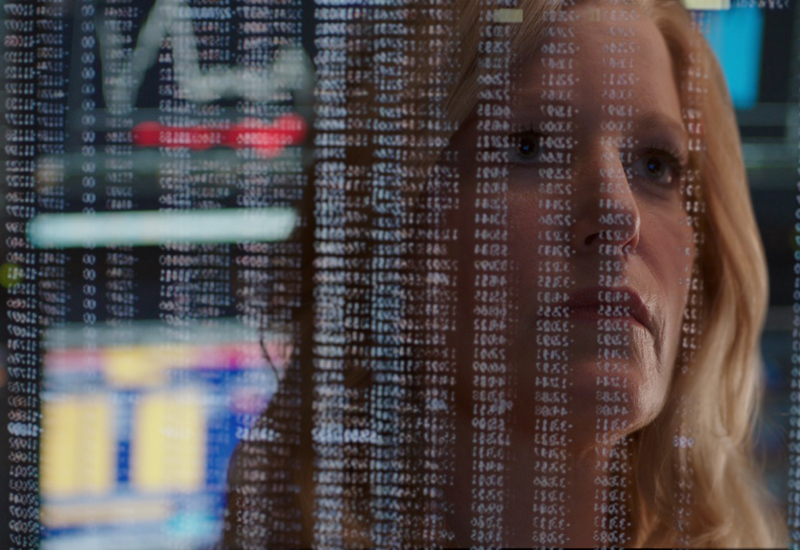 (WOMENSENEWS)— “Equity,” a drama about a woman on Wall Street, steals this week’s top spot for feminist movie goers. Naomi Bishop (Anna Gunn), noted for her successes in taking startup companies public, is ruled by ambition, obsessed with money and makes no attempt to camouflage or apologize for her greed and lust for power. Her career moves are deft. She competes with other women, but doesn’t use them as stepping stones. Her life is turned upside down when she is implicated in a trading scandal about her latest IPO. Under close scrutiny by a wily female investigator, Naomi is forced to ferret out corrupt colleagues, so she can survive. Filmmaker Meera Menon’s financial thriller, scripted by Amy Fox, establishes a strong and fascinating female lead in a male-dominated domain. It’s inevitable that “Equity” will be compared with “Wall Street” and “The Wolf of Wall Street,” the iconic Wall Street scenarios, and that Naomi will be measured against the titanic characters of Gordon Gekko and Jordan Belfort. But don’t do that. Invest, instead, in “Equity’s” female perspectives and finely defined characters.

“Into the Forest,” another movie about female empowerment, stars Ellen Page and Evan Rachel Wood as sisters struggling to survive the terrifying circumstances of a massive apocalyptic power outage. Patricia Rozema’s direction and script (based on Jean Hegland’s eponymous novel) presents a feminist perspective on the end-of-days genre, probing our overdependence on technology. The story begins with the self-absorbed sisters safely ensconced in their rural woodland home, glued to their computers, planning their futures. When the power fails, they’re disconnected from the web and must reconnect with their natural surroundings and each other to survive. Sounds simplistic, perhaps a bit hokey. It’s not. Fine direction and performances produce a dense and gripping sense of reality and the plot keeps you on the edge of your seat.

“Nerve” is a compelling thriller in which Vee, a high school senior (Emma Roberts), signs on to play an edgy but seemingly carefree online real-time game of truth or dare, with real cash prizes. While playing and scoring, she finds herself caught up in increasingly outrageous and dangerous dares staged by anonymous manipulative handlers. She is also followed by an avid community of watchers. Scripted by Jessica Sharzer and based on Jeanne Ryan’s novel, the scenario represents an extreme version of the misadventures that can befall naïve youngsters. Opened July 27.

“Tallulah” is this week’s second Ellen Page starrer. It’s about a young woman who poses as a hotel-endorsed babysitter and winds up “rescuing” a neglected toddler from her carelessly abusive mother, a self-absorbed and desperately unhappy Beverly Hills housewife who calls in authorities to find her “kidnapped” child. Mother-daughter relationships and mothering issues come clearly into focus when Tallulah approaches the estranged mother (Allison Janney) of her ex-boyfriend for help with the child, whom she claims as her own. Written and directed by Sian Heder, this unusual girl-on-the-run scenario progresses through a thick web of deceits and forgivably artificial plot points and, fueled by superb performances, engages you from start to finish.

“Bad Moms” is a raucous comedy in which dissatisfied housewives (Mila Kunis, Kathryn Hahn, Kristen Bell) who feel trapped in their daily mothering duties take time off to pursue a few of their own pleasures. The film, a self-indulgent fantasy from the writer/director team of Jon Lucas and Scott Moore, is overripe with stereotypical bad behavior. Even for mommies seeking relief, this crass film misses the mark.

“Shelley,” this week’s femme-centric horror flick, is a womb-for-hire scenario with scares in store. Louise (Ellen Dorit Peterson) and Kasper (Peter Christoffersen) are privileged New-Age Danes who hire a Romanian maid (Cosmina Stratan) to help them while Louise recovers from a disabling miscarriage.  The maid agrees to be a surrogate mother for the couple. As the two women become friends, their identities blur. Tensions that develop between them turn into slow-burn psychological horror. Cinematography, sound and strong performances all rescue a scant and somewhat predictable scenario.

“Jason Bourne” is a failed attempt to resurrect the charismatically heroic anti-hero personified by Matt Damon. Scripted and directed by Paul Greengrass, this disaffecting episode in the monumental franchise features an endless, ceaselessly violent and deafening cat-and-mouse chase as the bad guys (Tommy Lee Jones in a phone-it-in performance and Alicia Vikander, who is distressingly deadpan) try to defuse their no-longer-active but potentially explosive “asset.” If you’re hoping for the thrills imparted by the three previous Bourne movies, don’t go.

“Hollywood Beauty Salon” is filmmaker Glenn Holsten’s superb and inspiring look at a Philadelphia beauty parlor run by and for people recovering from mental illnesses. The salon, part of the NHS Germantown Recovery Community, is run by Rachel “Hollywood” Carr Timms, an extremely caring woman who turns hair care into a self-esteem raising opportunity for staff and clients. The film, shot over four years, presents several central characters whose captivating stories of healing become involved with the filmmaking process itself. A must-see.

“Miss Sharon Jones!” is Barbara Koppel’s affecting chronicle of the Grammy-nominated R&B singer’s struggle to survive pancreatic cancer and return to her career. Koppel’s’ intimate footage of Jones on stage and off reveals a woman of extraordinary strength and spirit. Her determination to continue to express herself and her faith in song is the stuff of legends. Miss Jones and her music are uplifting in every way.

“Gleason,” by Clay Tweel, chronicles football titan and New Orleans post-Katrina hero Steve Gleason’s struggle with ALS, the crippling, life-taking disease. Filming for this documentary began in 2011, shortly after Gleason’s diagnosis, with the intention of leaving a father’s legacy of love for his as yet unborn son, Rivers, and serving as an inspiration for others who are struggling with the disease. Masses of fans have rallied to help Gleason realize his dreams and seek a cure for ALS.  Gleason and his dedicated wife, Michelle, are heroic human beings. The film is extremely affecting. See it and be inspired by their strength.

Stay tuned for reviews of next week’s openers and movie news.