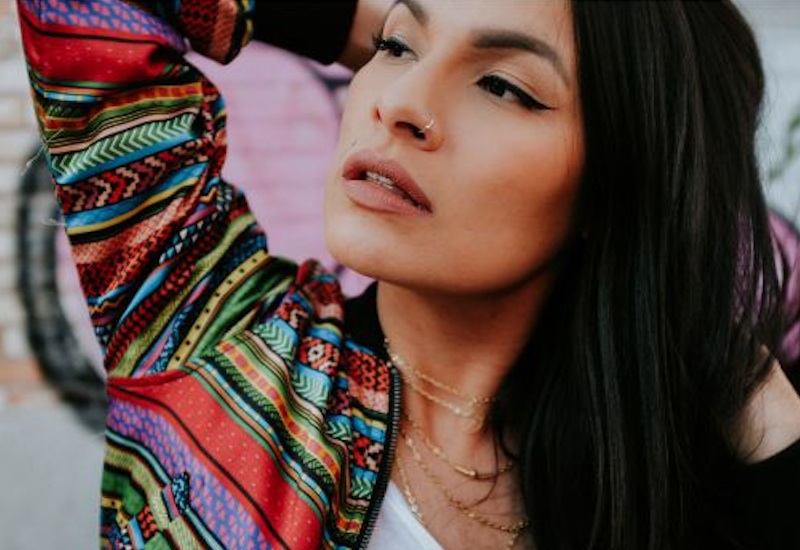 WINNIPEG, Manitoba (WOMENSENEWS)—A small child performs a traditional Kwakwaka’wakw dance, showcasing the indigenous populations on Vancouver Island, Canada. A Cree woman wonders if there are other aboriginal Olympic weightlifters in the country. A family hunts for geese in the Northwest Territories.

These stories of indigenous women across Turtle Island, the name given to North America by indigenous cultures, are collected on the new photography blog Tea and Bannock.

The blog was founded by Tenille Campbell, a member of the Dene community who grew up in Lac La Plonge, in northern Saskatchewan, an area of Canada filled with trees, lakes, and bitter, cold winters.

Campbell, who now lives in Saskatoon, wanted to form a gathering place for indigenous photographers such as herself, particularly women.

“I thought we have something to say and we all have something to say that’s different because we are not all the same, which I think is a huge part of the blog,” said Campbell, a photographer, mother and Ph.D. student at the University of Saskatchewan who’s looking at aboriginal literature and ideas of community, oral traditions, storytelling and urban and reserve identity through writing.

The blog, launched at the start of 2016, showcases some beautiful images. But its other purpose is to help indigenous women use the medium as a way to explore and reclaim their heritage.

“It was important for me to showcase my experience because I’m Dene … I don’t speak my language and that bothers me,” Campbell said in a phone interview after coming home from doing a workshop in northern Saskatchewan. “This was a journey, literally a journey, of finding out how I identify as indigenous.”

The blog is also important to Campbell as a way for indigenous women to control their own media depiction and rattle such dominating images as Pocahontas or Tiger Lily in Peter Pan.

“None of us fit that stereotype of indigenous. I’m a pale-skinned Dene with curly hair and I’m not typically what you think of when you think Indian woman,” Campbell said. “It’s something that I’ve always been aware of as aboriginal; specifically with images. All of us women just have such different life experiences and I was so sick and tired of the women in headdresses or just this one visual that we were allowed to be.”

Campbell said the blog clearly demonstrates that there is not one type of indigenous woman, as movies or television may have people believe. Heritage, culture, language, land, traditions and family are just some of the contributing factors that make each photographer’s perspective unique.

Campbell’s own work explores her friendships, the land, culture and raising an indigenous daughter in the city.

Across the country on the West Coast, Amanda Laliberte photographs from her community in Alert Bay, British Columbia. Her work tells of the challenges and triumphs of life on a tiny island. Photos might show how to hang fish for smoking. They also depict tender moments with her family and refer to the painful legacy of a colonial history that ripped many indigenous families and communities apart.

In a black and white image, Laliberte’s son walks up to the dark doors of a building painted with the graffiti of an indigenous boy, wearing religious clothing. The building was St. Michael’s Residential School, run by the Anglican church and opened in 1929. For decades indigenous children were sent there and to other residential schools and taken from their families. During the Truth and Reconciliation Commission, established in 2008 and completed in 2015, with events across the country, some of those children spoke about the abuse they faced. Laliberte was taking photos the day St. Michael’s Residential School was demolished in 2015.

“As the tears streamed down my face, I watched those in front of me throw rocks at the ruins of the school, trying to smash the bricks before the bulldozers got the chance,” Laliberte wrote on the blog. “I saw the young and old, families and friends, holding on to each other, crying, yelling, hugging and laughing. Sometimes, objectivity needs to be lost.”

Inuvialuit photographer Caroline Blechert, from Yellowknife, a community located in the Northwest Territories, showcases everything from indigenous inspired fashion shows to ice festivals in some of Canada’s most northern regions. In the blog she writes of the importance of capturing how ancestry can be intertwined with a modern setting, breaking the stereotype that indigenous people are trapped in the past.

“I’ve always believed our roots are an important part of our identity, and being able to incorporate both worlds – the traditional and modern – is something that keeps me grounded yet continually growing,” she wrote.

“More importantly it’s about people who are culturally aware and that doesn’t specifically have to be indigenous culture,” she said.

“We all talk about the kokum [grandmother] who feeds everybody but there are a lot of grandmas like that. And we talk about the uncle who won’t stop telling the same stories over and over, people have those uncles,” she added. “So I think if people read more they are going to be able to connect to the stories as opposed to just thinking this is an Indian story; this is a human story.”

Geraldine Malone is an independent multi-media journalist based in Canada. She has won regional and national awards for her coverage of indigenous and environmental issues. She was named a 2016-17 fellow in Global Journalism at Munk School of Global Affairs at the University of Toronto. Follow her on Twitter @KellyGerMalone or email malonegerkel@gmail.com.