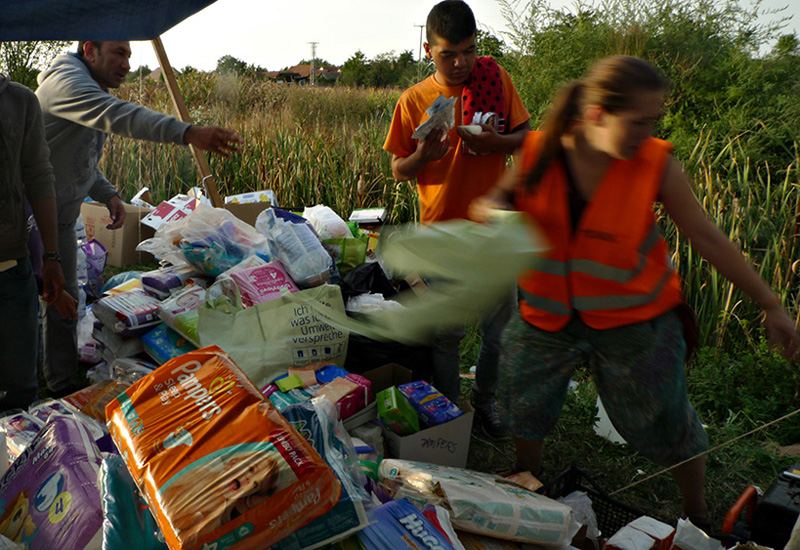 In Tovarnik, Croatia, a female volunteer helps organize and distribute donations for incoming refugees on the border between Croatia and Serbia, September 2015.

ZAGREB, Croatia (WOMENSENEWS)—When the images of refugees pouring through the so-called Balkan Route started coming through the mainstream media in Croatia, Ana ?u?a could not sit still and continue her university studies without getting involved. She contacted the Center for Peace Studies in Zagreb and joined their volunteer network. Soon, at random hours of the day or night, she offered tea, blankets, clothes and played with the refugee children.

The overwhelming majority of volunteers on the ground helping the refugees were women, she said in an interview between her visits to the transit camp last fall. The men around her were mostly police or translators.

When ?u?a, a second-year university student majoring in political science, would go back to Zagreb, her male peers would act protectively and warn her about the dangers of engaging with male refugees. But what they were more focused on was her volunteerism, “‘Are you expecting to be rewarded for that? Are you going to get money?'” Doing unpaid work for the benefit of others was cause to suspect some sort of hidden agenda.

Gender stereotypes for volunteering both explain and reinforce a division of labor—paid or unpaid—along gender lines in Croatian society.

Here, the man is upheld and encouraged to be the main breadwinner and focus on his job and career. The woman is taught to care for the children and home and, by extension, community. Those gender roles are implied from a young age with toys and also in ads about cleaning and household work that target women. The government’s promise of more than $1,000 for every newborn is also widely seen as reinforcing the procreative importance of women in saving the homeland from low population growth.

Though the borders and the transit camp are now closed, a few hundred refugees are in other locations in Croatia. Some are in limbo, unsure of where to go and how, while others are awaiting, for example, decisions on asylum requests. Volunteers are still active around integration and advocacy activities, especially as the country awaits an additional quota of about 1,100 people to be relocated to Croatia.

The mass transiting of refugees has triggered a flood of mixed reactions that has exposed the division between those who’ve rejected the newcomers and those who seek to help them.

The first group is loud on social media. At refugee-related conferences they proliferate hate speech and fear mongering by connecting the loss of social benefits and jobs with refugees, terrorism and religion. Those who seek to help, by contrast, took in refugees overnight during the mass transit, helped drive them to the border, bought food, clothes, sim cards or phone credit out of their own pocket and joined volunteer efforts in transit camps and elsewhere. Many of those people remembered their own experience or that of family members in the previous war as refugees.

Meanwhile, the majority of decision-makers in business and politics are men.

Since 2000, no single Croatian government has had more than four women in the position of minister, Višnja Ljubi?i?, ombudsman for gender equality, was quoted in local media reports as saying. And yet women dominate the civil society scene, say several interviewees, especially in organizations that deal with children, education, community, minorities, human rights and, unsurprisingly, women’s issues.

Those who volunteer tend to embrace the possibility for an improved multicultural society that values helping the disadvantaged—whether local or foreign—by sharing the wealth in whatever form.

Tea Vidovi? used to coordinate volunteers before becoming one of the program coordinators at the Center for Peace Studies, a beacon for humanitarian activism that has been also focusing on refugee-related issues since 2003, six years after its founding.

The few male volunteers are older, established career-wise and financially stable, says Vidovi?, who spoke with Women’s eNews during a pause between working with refugees along the border with Serbia. The average profile of the female majority is, by contrast, high school to university-age.

In the time of former Yugoslavia, volunteer actions were common place and used to build much of the country’s infrastructure. Since the breakup of the country, volunteering, to some, is negatively associated with communism.

Volunteering also got a bad name, Vidovi? says, when the government promoted employment of students in their field of study by providing them with unpaid “jobs.”

While men tend to work within the system—and get ahead by focusing on career and money—women are trying to change the rules of the game.

“What I saw in them [women] is this need to be a part of social change: ‘I see this is happening in society and I don’t like it and I want to do something about it,’” Vidovi? says.

Of the 28 recent graduates from the one-year peace studies program organized by the Center for Peace Studies, only three are men.

Romana Pozniak is one of the graduates who has also been volunteering for several years before the arrival of refugees in September 2015. She agrees there is patriarchal prejudice against unpaid work.

“For men, it [volunteering] is a girly job,” she said in an interview in Zagreb. “We’re sensitive and emotional and we’re helping, talking about rights. It’s more acceptable for women to volunteer. When a man does that, he’s considered weird. It’s not ‘manly.’”

Pozniak feels that men often frown on her volunteerism as the folly of a naive idealist pursuing a hobby at the cost of a serious career.

The implication is dangerous, she says, because it conveys that what is valuable in society has to have a price tag and should be financially rewarded. She often senses a smirk that further implies her inability to be independent, financially and otherwise, from male breadwinners: “We can afford to volunteer as if, because I am a woman, I won’t ever have big money and my family will support me as much as they can.”

Six years ago Martina Leopold started a nonprofit to aid children from economically disadvantaged families and connect them with donors to help with everything from toys and birthday presents to school fees. Of the 2,000 private donors connected to Mali Zmaj, or little dragon, less than a handful are men.

Men prefer a quick fix. “They think they will come here and there will be kids who will cry and they will pick them up and then they [kids] will be happy,” Leopold said in an interview in the organization’s basement office in Zagreb, where donations are sorted through and handed out. “If they come here and see they really have to work, they don’t like it and often don’t come again.”

As the newest E.U. member, Croatia falls in line with some of its eastern neighbors and Malta and the United Kingdom in terms of its gender make-up among volunteers. In a 2010 study “Volunteering in the European Union,” which did not involve Croatia as it joined in 2013, Bulgaria, Slovakia and the Czech Republic also had a greater number of female volunteers.

But even in countries such as Sweden, with its high gender equality rating and where male volunteers outnumber females, the types of volunteering and distribution of roles is key. The main organization there that handles the majority of rescue operations at sea is volunteer-based, not funded by the government and mostly male, according to a 2014 study, “Volunteering, Gender and Power.” Though no tasks are done solely by either sex, men tend to occupy positions of influence and power. Women are more pervasive in the fields of medical assistance, administration and fundraising.

When Krešimir Znika first walked through the door of the Volunteer Center of Zagreb seven years ago, the reaction of the female-only office was memorable.

“For them it was really cool because I was older and a man and that was really unusual because it’s usually students, and I had managerial skills,” Znika says.

The center is one of the largest volunteer networks in the country of 4.5 million inhabitants. It has 14,847 online registered volunteers, 71 percent of whom are women. Tanja Star?evi?, the center’s public relations staffer, estimates that even when including volunteers who did not register online, the overwhelming majority are female students between the ages of 18 and 30.

And the future of volunteerism may be growing among younger people. A few years ago the center was the main driver behind a project to start high school volunteer centers across the country. Though the project is officially over, a growing number of high schools have started their own organizations.

To attract more people, the Volunteer Center of Zagreb has switched its tune away from tugging at emotions, empathy and altruism. One popular postcard that accentuates the personal benefits of solidarity reads: “Be selfish, volunteer.”

Cyrille Cartier is a freelance journalist and journalism mentor sharing her time between Europe and the Middle East.