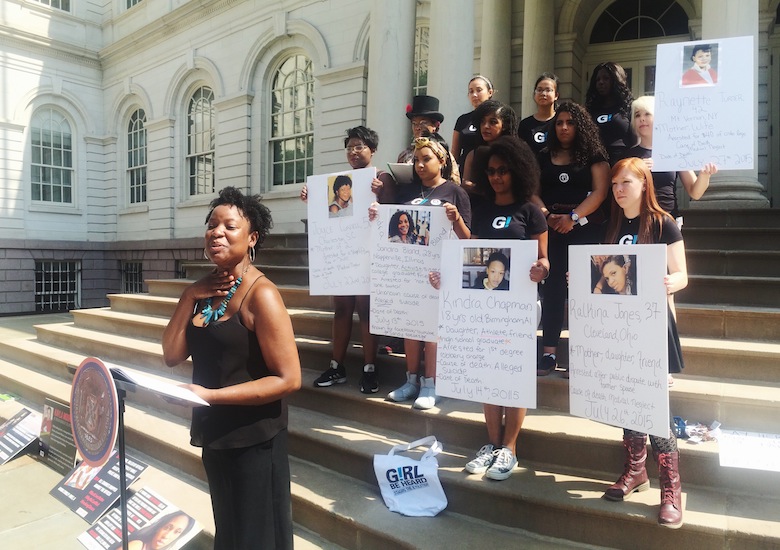 NEW YORK (WOMENSENEWS)— A group of girls claimed the steps of City Hall this week to tell the stories of five black women who all died in police custody a year ago, during the month of July 2015.

It was the debut of the #SayHerName performance by Girl Be Heard, a political theater company for young women and girls based in Brooklyn with 170 female performers aged 12 to 21.

With live music and storytelling they animated the memories of the five women who were silenced: Sandra Bland, Joyce Curnell, Kindra Chapman, Ralkina Jones and Raynette Turner.

Holding white boards displaying the women’s portraits and biographies, the girls each performed a short emotional monologue depicting the lives of Bland, Curnell, Chapman, Jones and Turner, before and after their deaths. The group later joined hands to sing about the women’s places in the world as mothers, wives, daughters, coworkers and friends.

Three days after being arrested and charged for an improper turn signal, reportedly after a confrontation with a Texas police officer, Bland was found hanging in her jail cell.

Her death sparked widespread outrage at the trooper’s decision to arrest her in the first place and added fuel to the #BlackLivesMatter movement, which marks its third anniversary this month. Since last July, at least 810 more people have lost their lives in jail.

Black Lives Matter is celebrating three years of political resistance. Tell us what #BlackLivesMatter means to you! pic.twitter.com/rFMmxSwiCD

The movement’s anniversary comes amid national protests over the recent fatal shootings of two black men by police officers in Baton Rouge, Louisiana, and St. Paul, Minnesota, as well as the subsequent deaths by a sniper of five police officers in Dallas. In the case of the Baton Rouge shooting, the American Civil Liberties Union of Louisiana and local contingents filed a lawsuit against the city’s police department for undue violation against crowd protesters last weekend.

We joined with @aliciakeys, @Beyonce & more to shed light on #23Ways you could be killed if you’re black in America:https://t.co/LO5ujy3jw3

Earlier in 2015, Bland drew publicity after she posted a series of videos called Sandy Speaks about the infringement of civil rights, including accounts of police brutality.

Girl Be Heard has put on other performances for the White House, the United Nations, the State Department, TED conferences and under-privileged communities in New York and around the world.

In #SayHerName, which took place on July 13, they went beyond the circumstances of the five women’s arrests and deaths. The girls recounted features of the women’s daily lives, whether it was a happy long-term relationship with her girlfriend, moving to the city for a new job at her alma mater or the simple joy of playing basketball while being 5 feet tall.

Some impersonated the women. Others spoke for themselves, reflecting on the things they had in common with the women, showing how similar lives are and how equal lives should be.

Tiff Roma, 26, an artistic associate at Girl Be Heard who has been with the company for six years, said the group had planned the performance before what happened the shootings of Alton Sterling and Philando Castile last week.

While #SayHerName focuses on police violence and injustice towards black women, it resonates with the larger issue of white privilege and racism around the country, Roma said in an interview conducted in front of City Hall a few minutes before the performance. She said every woman featured in the performance was arrested wrongfully by people who should have been providing them with protection.

“At GBH, we use art to challenge the status quo, to respond to the injustice in the world by creating dialogues among people,” Roma told Women’s eNews.

The battery of headlines, incidents and protests about police violence, along with the shocking scenes captured by citizen videos and police cameras, can be overwhelming, Roma said. Art can help audiences slow down, open up and reflect.

The performance included a chanting procession to the nearby African Burial Ground.

As she kept pace with the group, Abigail Ramsay, director of global partnerships at Girl Be Heard, talked about the symbolic resonance of the burial ground for #SayHerName.

Known as New York’s earliest African American cemetery, the place was closed down for development in the 1700s and intact burials were not discovered until the 1990s, when it finally became a national monument to the colonial history of the black community.

“To have [the site] recovered is similar to the work that we do, which is putting stories that are not heard onto a stage,” Ramsay said.

As conversations around police brutality continue, Ramsay said the names of women such as Sandra Bland, Joyce Curnell, Kindra Chapman, Ralkina Jones and Raynette Turner must be kept alive.