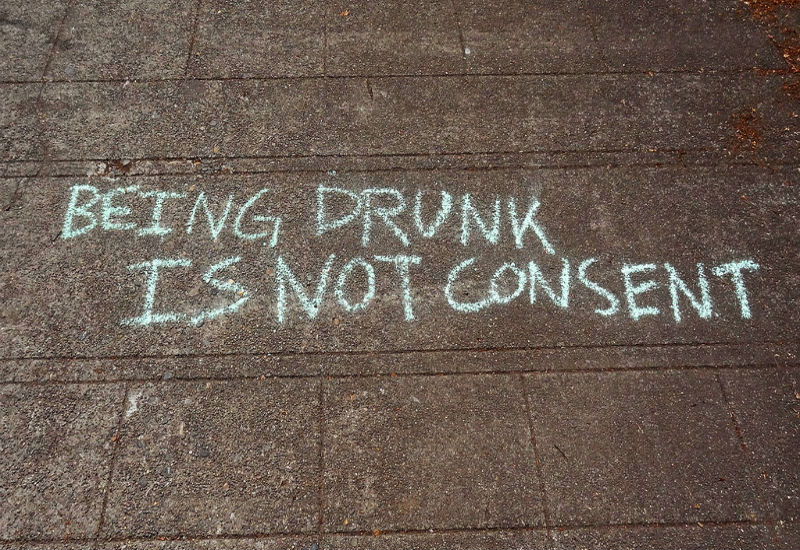 (WOMENSENEWS)—On Sunday, Stanford University graduates celebrated their commencement by showing solidarity with the classmate who has become the nation’s most recent symbol of flawed justice for rape victims.

Late last week U.S.A. Swimming said Brock Turner, the former Stanford student who was recently convicted of sexual assault, will never be allowed to compete in its events, reported CNN.

The move is part of a major backlash against Turner, who was found behind a dumpster after a fraternity party in January 2015 sexually assaulting an unconscious “partially clothed woman.”

His six-month sentence has sparked widespread outrage over the past 10 days, which may be further inflamed by media reports that Turner could be released three months early.

On June 3, Turner’s victim released a 7,000-word statement which she sent to the judge prior to the trial.

The letter has been widely distributed online and in the media, with some newscasters reading most of it out loud, including CNN’s anchor Ashleigh Banfield.

Among politicians, California Rep. Jackie Speier has announced that she will host a special hour on June 15 for members of both parties to read the statement in full on the floor of the U.S. House of Congress.

Today I read part of the Stanford rape survivor’s statement on the House floor: https://t.co/vpL1lLBN13 #BrockTurnerisaRapist

The judge in charge of the case, Aaron Persky, said in the Guardian “a prison sentence would have a severe impact on [Turner],” and that he thinks “[Turner] will not be a danger to others.”

Following this statement, Persky faced nationwide threats accusing him of failing to understand sexual violence and protect young women’s safety on college campuses. Some potential jurors have refused to serve in the courtroom with Persky, reported the Los Angeles Times.

The petition to remove Persky from the courthouse had attracted more than 1.2 million signatures as of Monday morning.

Former football star Brian Banks, who was wrongly convicted of rape but had to spend five years in prison, claimed that the Turner’s trial is “a case of privilege.” The black football player said that the judge took into consideration Turner’s lifestyle, one of a son born into a middle class white family. Persky’s judicial mercy appeared ludicrous to Banks, whose conviction only got overturned 10 years after his false charge.

Turner added fuel to the fire by shifting the blame to the party culture on college campuses. He said in court that he would not be in favor of anyone who has to “experience the destructive consequences of making decisions while under the influence of alcohol,” and that partying and drinking are accountable for his actions.

In rebuke, TIME contributor Darlena Cunham writes, “Alcohol did not forcibly penetrate an unconscious woman behind a dumpster.” The real issue lies in the notorious privilege white men own.

Family members and friends who supported Turner by sending in letters attempting to justify his innocence have also faced backlash. A screenshot of the letter by his father, Dan Turner, has met waves of criticism on social media.

The Guardian’s national reporter Scott Bixby shared an excerpt of the letter by Dan Turner about the six-month sentence and probation being “a steep price to pay for 20 minutes of action.”

Stanford rapist’s father: Six months in jail and probation is “a steep price to pay for 20 minutes of action.” pic.twitter.com/fBKjThU8OX

Dan Turner is also having trouble distinguishing “sexual promiscuity” from dragging an unconscious woman behind a dumpster and raping her.

John Pavlovitz, a minister in North Carolina, wrote a response letter to Turner’s father, which also went viral and was later reposted on the Huffington Post.

Pavlovitz pinpoints the unlikely possibility of Brock Turner being a victim and instead asserts that “he was a damager.” Pavlovitz adds that a father should love his son by teaching him to take serious responsibility for his awful decisions and not by making excuses and getting away with them.

Turner’s childhood friend Leslie Rasmussen, who is the drummer for her band Good English, was barred from performing at New York’s Northwest Festival for defending her friend.

A drummer defends the Stanford swimmer convicted in a rape case; her band pays a price. https://t.co/2mZjaBZowE pic.twitter.com/dthaDgYlh5

Plenty of rape cases have stirred outrage in recent years.

In late May, Kenn Starr, who led the impeachment case against former President Bill Clinton, was demoted from his position as president of Baylor University in Waco, Texas, after mishandling sexual assault incidents involving the school’s football players. During 2009 and 2016, Baylor failed to respond to rape reports filed by at least six female students, according to Sports Illustrated.

Last year, rape-justice activists denounced a deal to drop charges against a high school administrator in Steubenville, Ohio, implicated in the mishandling of a notorious gang rape that involved members of the high school football team.

In 2011 Women’s eNews interviewed a juror in a high-profile rape case involving New York police officers. The juror was upset by the not-guilty verdict and said justice had not been served. She made a strong statement about a mishandling of forensic evidence.

Amid the mayhem of the Stanford case, the victim chooses to remain anonymous, but not silent. She goes under the pseudonym of Emily Doe to protect her privacy.

#StanfordVictim “Emily Doe” reminds us we can (& must) all take action to ensure #sexualviolence is taken seriously. pic.twitter.com/cTkFIR32Kc

In a statement to KTVU, Doe wrote, “I am coming out to you simply as a woman wanting to be heard […] For now, I am every woman.”

Documentarian Ken Burns, in his commencement speech at Stanford, compared Doe’s 7,000-word letter, in its importance for judicial rape reform, to the galvanizing effect of Dr. Martin Luther King Jr’s “Letter from a Birmingham Jail” on the civil rights movement.

Actress Lena Dunham, in collaboration with her “Girls” cast, demonstrated her objection against victim blaming in a public service announcement dedicated to the Stanford rape victim, calling her “the brave survivor.”

I dedicate this to the brave survivor in the Stanford case who has given so much to change the conversation. https://t.co/KMOJUxvPu0

Doe’s letter was even translated into Vietnamese in its entirety by a friend of this reporter. It has since received more than 300 shares and 1,200 reactions locally on Facebook, showing how this issue resonates far beyond English-speaking countries.