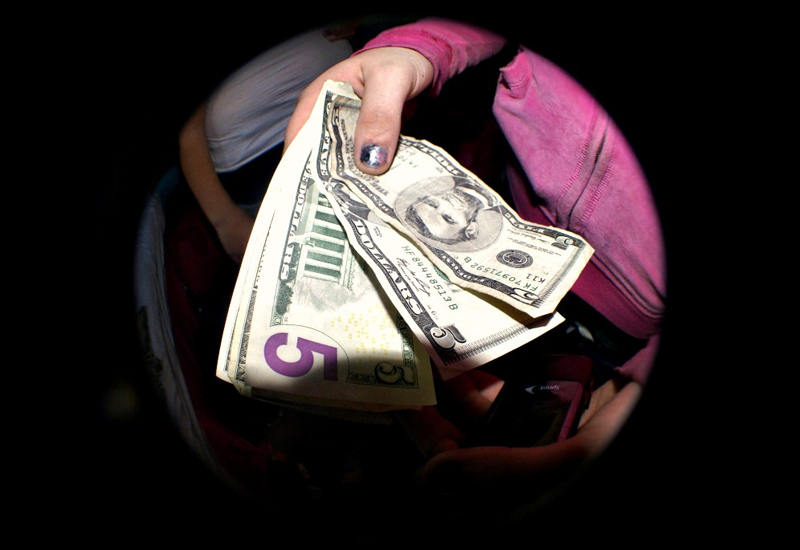 PLEASANTON, Calif. (WOMENSENEWS)—Amanda Deng’s parents keep her and her sisters in the dark about the family’s finances. But they readily involve her male cousins in such things as making major household purchases.

“In my own Asian household, financial responsibility has always been pushed to the brothers, uncles and fathers,” the 16-year-old San Francisco Bay Area student said in a phone interview. “Since birth, my sisters and I have been taught that this is something we don’t have to worry about.”

Nearly half of surveyed girls aged 11 to 17 feel uncomfortable making their own financial decisions, according to 2012 research by Girl Scouts of USA. And only 12 percent of them say they will feel “very confident” making these decisions as adults.

Girls are missing out on financial literacy, a trend that can have serious economic implications later in life, such as bankruptcy and poverty, according to research published in the Journal of Economic Literature.

Some of the big financial mistakes that people make, says Priya Gopalakrishnan, an accountant at Deloitte Tax in New York, involve the misuse of credit cards, including making late payments, paying only the minimum amount due, overspending credit limits and using cash advances.

“If financial literacy is low,” Gopalakrishnan said in an email interview, “girls are less likely to invest and more likely to experience difficulty with debt.”

Overall, however, Gopalakrishnan is upbeat about girls taking more charge of their money. She expects to see the financial literacy gender gap diminish over the next few decades, as a result of increased awareness and the efforts of financial literacy organizations.

But for now, only 17 states in the United States require high school students to study personal finance, according to a 2016 survey by the Council For Economic Education.

Annamaria Lusardi, founder and academic director of the Global Financial Literacy Excellence Center at George Washington University, thinks more teens should be actively prepared for the financial decisions they will face in life. In an interview with GW Today, Lusardi said, “Financial literacy is not acquired by ‘breathing air.’”

Some teens and literacy organizations are tackling the problem.

Deng is one of three co-founders of Investing in Her Future, a nonprofit organization that provides free classes and resources to increase financial literacy among female teens in the San Francisco Bay Area. (The reporter for this story is also a co-founder.) Since its founding last year, the organization has served over 250 students, more than 85 percent of whom are female teens in the Bay Area.

“Getting female teens interested was initially quite difficult. However, once we started articulating the importance and the purpose of gaining more financial literacy we are certainly seeing more interest and participation. But it is still a work in progress,” says Deng.

Deng attributes the organization’s success in reaching out to its target group to “scaring girls with the reality of their financial illiteracy.”

When advertising for the organization’s events, Deng makes it a point to add the national and local statistics on the financial literacy gender gap and the potential consequences for a girl’s future family and career. Deng says it is the best way to “get the girls on their feet and worried about their futures.”

But it’s still not easy getting girls to come to the workshops.

After helping to start an investment club at her high school in Pleasanton, California, 10th grader Valorie Low wasn’t surprised to find herself as one of the only girls in a sea of boys during the first meeting. While trying to convince some of her female friends to join the club, she recalls them saying “finance wasn’t really [their] thing” and that “it seemed boring and dry.”

Low’s investment club focuses on investing and saving money at a young age. At a recent meeting, it hosted a guest speaker who worked at NASDAQ and a venture capital firm, and now works as an “angel investor,” or an individual who invests capital in startup companies in exchange for equity in the company or convertible debt.

Low acknowledges that finance can often be seen as “unfashionable and unappealing” for girls.

“It’s such a male dominated industry. I think we girls don’t know where we fit in,” says Low.

The financial literacy gaps that Low is trying to address in her peer group mirror those of college-age and older women.

A 2014 survey of 500 college freshmen at three top schools in California, conducted by Investing in Her Future, found that female students scored 13 percentage points lower than male peers.

“It really all starts with us as kids,” Schwab-Pomerantz says. “That’s where we learn the behaviors, attitudes and habits to take care of ourselves.”

Girls, Inc., a nonprofit based in New York, is also promoting girls’ financial literacy. It offers programs and initiatives to engage girls in role play situations, stock market simulations and field trips to financial institutions. It also offers mentorship and free resources. Girls Inc. also strongly encourages teens to start chapters in their own communities to add to the efforts.

Girls are also developing their financial smarts through their extracurricular activities. Rhea Manocha, a senior at Amador Valley High School in California, serves as the chief financial officer for DECA, a large business club on campus that prepares high school students for careers in business through competitions. Manocha earned the position after a rigorous application process; she is the fifth girl in a row to fill that position.

“As the CFO, I’ve learned how much financial planning and strategy goes into any decision. I see this translating into my own life. I now contemplate my every buying decision and I am actively saving,” she said in a recent phone interview.

Manocha predicts she will be able to buy her own car by her sophomore year of college, something she is on track to do by “saving 80 percent of her income and spending 20 percent.” She remembers picking up this strategy while researching how to manage the club’s budget as the CFO.

Sandhya Kalavacherla is a senior at Amador Valley High School who enjoys science and writing.