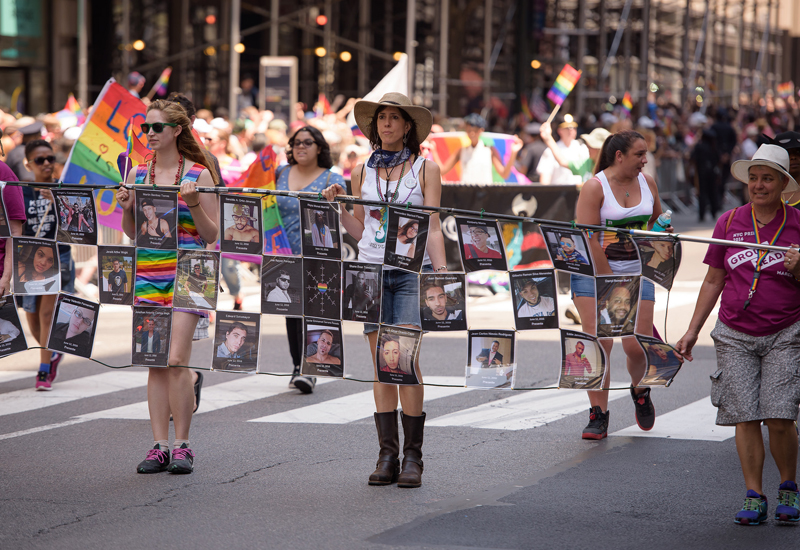 (WOMENSENEWS)— LGBT Pride Month 2016 was split in two halves, “before and after Orlando.” Until June 12, events had been rolling along on an upbeat note. Afterwards, the mood and context became more determined.

The massacre in a gay nightclub in Florida claimed global attention as the country’s worst mass shooting in its modern history and brought simmering political controversies to a boil. Elements in the cauldron were hate crimes, terrorism, Islamophobia, gun control, who is allowed to donate blood and the elevated levels of violence directed against the LGBT community.

On June 24 President Barack Obama, after visiting Orlando to deliver a speech in which he demanded Congress take action on gun control, named the Stonewall Inn in lower Manhattan a national monument as part of America’s national parks system. In a video statement, Obama said the designation celebrates the “richness and diversity and uniquely American spirit.”

On June 26, New York City witnessed one of the world’s largest pride parades. Organizers estimate that more than 30,000 people marched and almost 2 million people turned out to watch the parade, according to press accounts.

Sarose Klein was a contingent organizer for Mount Holyoke College in South Hadley, Massachusetts, from which she recently graduated. Before the parade Klein had concerns about security at the event, but she wasn’t worried about turnout. “This year out of all years, this is where we need to be,” she said. “We need to be here for ourselves and for anyone who has been affected by Orlando.”

Because the killer was Muslim and had pledged allegiance to the Islamic State, the massacre stirred a national discussion about religious tolerance and Islamophobia. In response, a Muslim woman who lives in Florida offered condolences from her Islamic family to the survivors of the victims in a segment aired on “PBS NewsHour.”

The deadly attack at the Pulse nightclub also garnered national attention to the issues of gun violence, gay blood donation and LGBTQ rights for people of color.

On June 22, 170 Democrats participated in a 24-hour sit in led by Rep. John Lewis on the House floor to push for gun control measures before breaking for a recess. They said they would take the issue to their districts and resume their efforts on July 5, when Congress resumes.

The previous week, Democrats staged a 15-hour filibuster led by Sen. Chris Murphy of Connecticut three days after the rampage. Murphy spoke at length, and with outrage, about the 2012 Sandy Hook Elementary School shooting. Among other things, he cited the courage of Ann Marie Murphy, the teacher’s aide who sacrificed her life in an attempt to protect a 6-year-old student. The filibuster led to an agreement by party leaders to hold votes on gun measures but no new gun restrictions were passed.

Comic by ACLU and @JenSorensen about how the the no-fly list actually works https://t.co/HICM1EcLll

The episode also spurred The New York Times to take strong aim at the gun lobby in an editorial entitled “The N.R.A.’s Complicity in Terrorism.”

In part because of the Orlando shooting, the stigma around gay men and blood donation also surfaced.

In December 2015, the U.S. Food and Drug Administration revised its policies on blood donors by converting a virtual ban on gay men donating into a 12-month waiting period since a man’s last sexual contact with another man.

Rep. Jared Polis of Colorado, who is openly gay, recently told CNN why he objected to the revision. Polis said there is no evidence that being gay raised your risk profile, and that using drugs and having unprotected sex were better screening criteria.

The FDA responded saying the administration would reconsider existing regulations based on further research. Blood supply expert Brian Custer told Reuters that it might take years until the FDA makes adjustments for policy at this level.

The fact that the majority of the Orlando victims were people of color also drew attention to the higher overall risks of violence on this community.

This was not the first massacre involving the LGBTQ community in the U.S.

Forty-three years ago, an arson attack killed 32 people in Up Stairs Lounge, a gay bar in New Orleans. The case drew little attention. Local authorities were silent, some family members were hesitant to claim the bodies of their loved ones because they were ashamed. Filmmaker Robert Camina tells the story in his documentary, “Upstairs Inferno.”

The Tony Awards for Broadway theater took place the night after the horrific event. Host James Corden began by giving a tribute to the victims. “Theater is a place where every race, creed, sexuality and gender is equal, is embraced and is loved,” he said, “Hate will never win.”

Singer-songwriter Christina Aguilera released a new single called “Change” to raise money for the victims of the Pulse nightclub shooting. The lyrics read, “who you love or the color of your skin shouldn’t decide how you will be treated.” Melissa Etheridge also wrote a song, called “Pulse,” in memory of the shooting.

The morning after Orlando, police arrested “a heavily armed man” who was on his way to the Los Angeles pride parade though additional information on his motives was unclear. Later, the man was identified to be an Indiana resident fleeing to California in order to get away from a molestation charge in his home state. The pride parade carried on afterwards, with brief interruptions from trans activists demanding more awareness on transgender issues.

PrideFest Milwaukee took place the weekend of the massacre and organizers wound up joining multitudes of vigils.

In the face of a national tragedy, @mkepride set an attendance record https://t.co/pMvEBc2rBm

The LGBT community around the world has shown solidarity with the victims. Among the parades in Europe, Vienna’s Rainbow parade on June 18 had the largest attendance of 130,000 people.

In Berlin, The Brandenburg Gate was lit up in rainbow colors while Germans came together around the historical monument to show their support for LGBT members worldwide.

Though in Turkey, Istanbul’s governor stopped the city’s Gay Pride Parade from taking place due to threats of violence.

Before Orlando, there were some good reasons to celebrate.

In late May, just ahead of LGBT Pride Month, the Department of Justice issued new guidelines  under Title IX, to protect the rights of transgender students. The “Dear Colleague Letter” explains trans terminology in more depth and provides clarifications on handling cases of discrimination to ensure students are treated equally whatever their gender identity. This includes fair access to school facilities, with an emphasis on bathroom usage as the primary push for future educational programs and social activities.

New Jersey Statewide LGBT Pride celebrated its 25th year earlier in June. Organizer Laura Pople said in an interview with Asbury Park Press that after the U.S. Supreme Court victory a year ago making bans on same-sex marriage illegal, the focus would turn to lobbying for transgender restroom access and campaigning against bullying

Leslie Gabel-Brett, director of education and public affairs for Lambda Legal, a New York-based nonprofit legal organization for LGBT people and people with HIV, says that while marriage equality was an important victory, there’s still an ongoing battle for LGBTQ equal rights.

“Today we still don’t have an explicit federal law prohibiting discrimination on the basis of sexual orientation and gender identity, although various legal decisions are making it clearer that existing laws provide protection under sex discrimination,” said Gabel-Brett, also a co-editor of “Love Unites Us: Winning the Freedom to Marry in America,” an anthology released this month looking at the path to marriage equality.

Besides the push for clearer language in existing legislation, she said other important issues include the fight for safe access to public accommodations, especially restrooms, fair access to health care, accountable police practices, more equitable policies for LGBTQ people living with HIV and the fight against gun violence.