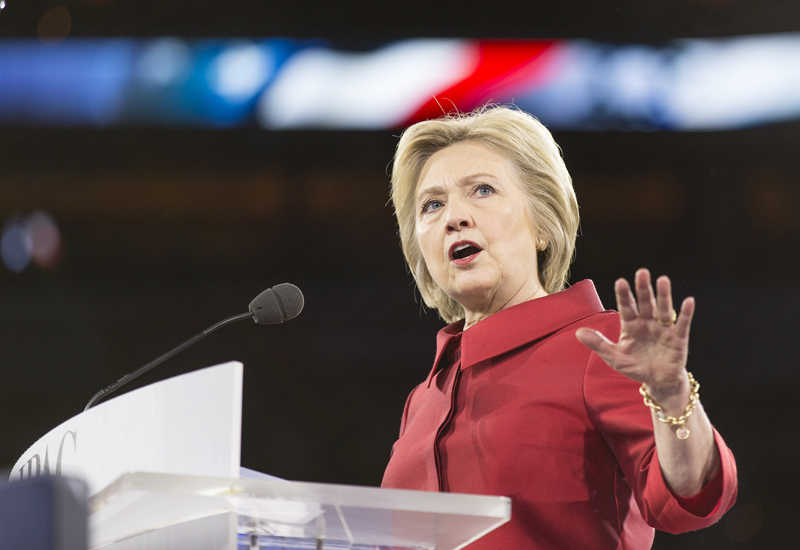 (WOMENSENEWS)— My phone pinged last night with a text message from a female friend in California. She sent a picture of her ballot after voting for Hillary Clinton. “I am so excited for Hillary,” she wrote. “Didn’t anticipate this feeling but it feels great.”

By the end of the night Clinton had won the state and claimed the Democratic presidential nomination. To celebrate she gave a speech laden with references to her mother, women’s history and glass ceilings, which captured the major moment in women’s history and sparked the #HistoryMade hashtag on Twitter.

“We’re allowed to be excited that a woman could be president,” read the top tweet when I last checked on that search-term page, issued by HuffPostWomen.

The victory also raised the likelihood of an endorsement by President Barack Obama as early as next week.

Marie Wilson, founder of the now defunct White House Project, which she launched in 1998 to provide political leadership training for women, hailed the contributions that women everywhere had made to Clinton’s victory.

Much love to all the women who built the White House Project. Your work helped Hurry History. Marie

Zerlina Maxwell, a writer and progressive outreach director for Clinton, tweeted about the inclusion of black women in the moment of victory.

One of the best parts of yest was that the Black women who have been working with Hillary for decades were all at HQ https://t.co/sBZmKIPbEj

One Tweeter sent out a photo of Clinton seated in a huge metal throne with big jagged edges captioned “Breaker of Chains and Mother of Dragons.”

Breaker of Chains and Mother of Dragons pic.twitter.com/urzd7eSZg6

Clinton’s victory was a signal to many to put aside politics and celebrate what her achievement might do to lift the outlook of little girls across the country and the world.

I continue to support @BernieSanders revolution! And it should continue.

His campaign, however, should not. https://t.co/CGVDhERgZ7

And then Kohn tweeted about her daughter’s newborn presidential ambitions.

As my daughter falling asleep tonite, she told me she’s going to dream about being president, too. CONGRATS HILLARY! https://t.co/tVvgcbEoPq

The moment was also rich for many older women, such as our longtime pundit Caryl Rivers, who recently wrote about “Why I Want to See a Female President in My Lifetime.”

For women such as Rivers, who lived through such indignities as having to sit in the balcony as a female member of the press corps, a possible Clinton presidency spreads a sweet smell of progress.

But not everyone was ready to put down their politics for the big occasion. One person I follow on Twitter, who has a deep objection to Clinton’s strong military backing of Israel, responded bitterly to a tweet about last night being good for little girls everywhere.

Are those the girls living under Clinton-supported Israeli apartheid or the ones she’ll kill w/ drones as president? pic.twitter.com/Yuq0FUGVUR

And Clinton’s big moment also reminds us that feminism is not monolithic. Naomi Klein, the Canadian author, political activist and noted critic of corporate globalism, pushed back against a “togetherness” note in one of Clinton’s tweets.

Bull. Not under the plutocracy u represent. As a feminist, I should feel a thrill right now. I grieve that I don’t. https://t.co/uz0y08mbbi

Tonight, we can say with pride that, in America, there is no barrier too great and no ceiling too high to break. pic.twitter.com/7vbGPJe543

Featherstone, who criticized Clinton in an article on Truthout earlier this year, also chose to reject the general love fest.

“We are asked to celebrate the breaking of glass ceilings this week,” Featherstone said in a statement emailed to me by the Institute for Public Accuracy in Washington, D.C., “as the possibility of a female president is hailed as long-overdue feminist triumph? But just what kind of a feminist is Hillary Clinton?”

Featherstone, author of “Selling Women Short, the Landmark Battle for Worker’s Rights at Wal-Mart,” covered the female workers’ wage dispute with Wal-Mart, and wrote about that issue years ago for Women’s eNews.

She also struck out at Clinton’s health care politics. “Clinton’s biggest policy contribution as first lady of the United States was in the area of health-care reform,” the Institute for Public Accuracy quotes her. “There she played a critical role in narrowing the national policy discourse — by disavowing a single-payer system, which would lower costs and ensure that everyone could have access to care, as in Canada…This is a feminist issue. As the Our Bodies Ourselves organization — authors of the indispensable women’s health book of the same name — pointed out in 2009, single-payer health care (also recognizable to U.S. policy wonks as Medicare for All) is the only system in which health care is independent of employment or marriage, both critical considerations, especially for women.”

Some seized this symbolic moment to consider more than just one tenacious political woman. What if her victory is a harbinger of more women entering the U.S. Congress, where female numbers are stuck below 20 percent? Think Progress circulated a nice April 29 article about that issue by Laurel Raymond, which ponders the many possible benefits of having more women in politics, from boosting the aspirations of younger women, to getting things done more effectively.

There, @CNN, we fixed it. pic.twitter.com/83uVpO7aVr

Corinna Barnard has been a journalist for more than 30 years. Her background spans finance, arms control, medicine, technology and parenting. In her most recent position, before joining Women's eNews in 2003, she worked for Dow Jones, Inc., where for several years she served as news editor for an international newswire covering emerging markets and later as a copy editor for The Wall Street Journal. Earlier in her career, Corinna was a radio commentator for "In The Public Interest," a national public-affairs radio program. She graduated from Yale University in 1980 with a degree in English literature.