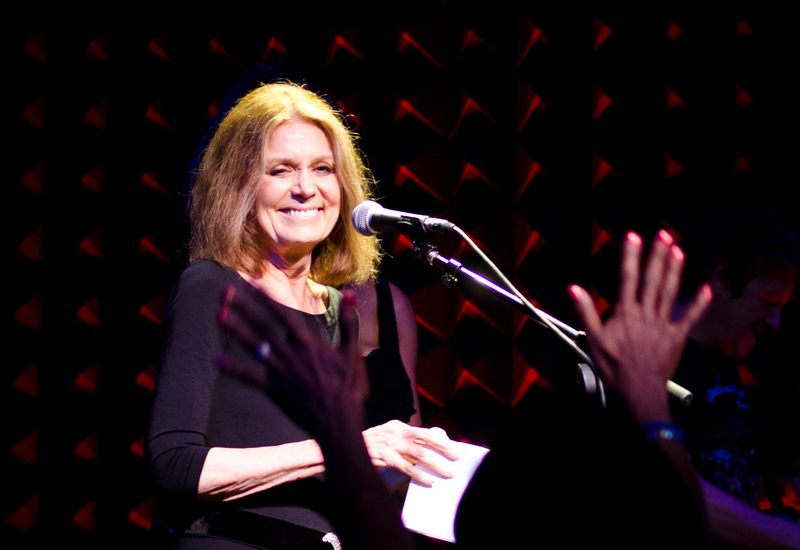 (WOMENSENEWS)—Gloria Steinem is lauded as a feminist icon. Madeleine Albright was the first woman to become the U.S. secretary of state. Debbie Wasserman Schultz is the chair of the Democratic National Committee. All of these women have something significant in common: They have all, at one time or another, supported a Hillary Clinton presidential bid.

But if Clinton’s goal is to win over millennial women who are predominantly supporting Vermont Sen. Bernie Sanders, Steinem, Albright and Schultz are not helping her case.

Steinem justifiably received a great deal of backlash after claiming in a recent interview with Bill Maher that young women are more likely to support Sanders because that’s what the boys are doing — though not nearly enough backlash for making transphobic comments about Caitlyn Jenner and Martine Rothblatt in that same interview.

“Women tend to get more radical … because they lose power as they age,” Steinem said. “They’re going to get more activist as they grow older. And when you’re younger, you think, ‘where are the boys? The boys are with Bernie.’”

Following the subsequent controversy, Steinem posted about the incident on her Facebook page:

In a case of talk-show Interruptus, I misspoke on the Bill Maher show recently, and apologize for what's been…

But instead of apologizing for her comments, Steinem apologized because others have “misinterpreted” what she said. However, I don’t think I’ve misinterpreted anything. Her assertion in her Facebook post that young women are activist and feminist in greater numbers than ever before — whether they’re choosing to vote for Clinton or Sanders — directly contradicts her “boys are with Bernie” comment.

Not Out of Context

Although Steinem initially said in the interview that young women are “very activist and they’re way more feminist” and are angry about what’s happening to them, her comments about Sanders, which reveal an extremely heteronormative way of thinking, were not taken out of context. She not only said those words, but also stuck by them when Maher reacted with surprise.

Well, it may interest Steinem to know that I, as a millennial woman of color who supports Sanders, spent all of last summer telling the men I lived with to stop mansplaining and whitesplaining the democratic socialist. Any politician I choose to support will never be free from criticism or an expectation of accountability — but they can rest easy knowing that I chose to support them because I took the time to think for myself.

“Is it any wonder that millennial women aren’t gravitating toward a brand of feminism that is this exclusionary?”

In any case, I don’t entirely know why people are shocked. Despite claiming that she learned about feminism and intersectionality from black women, Steinem wrote an op-ed advocating for Clinton back in 2008 in which she stated that “black men were given the vote a half-century before women of any race were allowed to mark a ballot, and generally have ascended to positions of power, from the military to the boardroom, before any women.”

Admittedly, she has been working to be more intersectional in her feminism following the widespread criticism she received after the op-ed was published, and I don’t want to be completely unforgiving after her growth these past eight years. That being said, however, Steinem and other feminists of her era have also long insisted that young women refuse to call themselves feminists for fear of being unable to get a date.

But Steinem’s comments about millennial women were not the worst thing to come out of that interview. The fact that Steinem then proceeded to make transphobic comments with Maher was even more infuriating, especially because these comments didn’t receive nearly as much attention or criticism.

In a reference to an award Caitlyn Jenner received from Glamour magazine, Maher attempted to reduce Jenner to “a woman with a dick” — and Steinem laughed along with him. She even alluded to Martine Rothblatt, the highest paid female executive in America, as someone who “was a man previously.”

Is it any wonder, then, that millennial women aren’t gravitating toward a brand of feminism that can be and often is this exclusionary?

And Steinman is not alone. Schultz recently went so far as to say that young women are complacent in the era after Roe v. Wade, and although Steinem rebutted that in her interview with Maher, she still does not prioritize the issues that millennial feminists care about today.

Albright is another example. At a recent Clinton rally, she reiterated something she has been saying for decades: “There’s a special place in hell for women who don’t help other women.” On its own, this is a valuable and important statement, one so famous that it has ended up on Starbucks cups. But at the rally, Albright said this right after saying that young women need to help Clinton become president. In that moment, it seemed as though an older generation of feminists revoked any entitlement to a nuanced political decision that young women might possess.

Unlike Steinem, who attempted an apology, Albright defended her comments, saying in an interview with Time magazine that “people need to understand who has been really fighting on their behalf on issues that are of interest to women and clearly Hillary Clinton has.”

Clinton also defended Albright’s comments by implying that “political correctness” has made us all too sensitive. “Good grief, we’re getting offended by everything these days!” Clinton said on NBC’s “Meet the Press.” “People can’t say anything without offending somebody.”

There is an explicit generational difference here. What women like Steinem, Albright and Schultz worry about is that millennial women did not have to experience the struggles that our predecessors did. We were born after Roe v. Wade, and when we think about the possibility of a female president, the question is not “if” but “when.”

“I think because life is better, thanks to people like Hillary and me,” Albright told Time. “I have to tell you when I went for my first job when I was 22 years old, they said, ‘So what are you going to do, honey?’ I’m not sure that young women get that now. So it has taken a lot of work now. So what concerns me most of all is that we don’t go backwards.

The short answer is “no.” While it is true that we grew up after Roe v. Wade, we still have to constantly combat attempts to revoke abortion access and reproductive health care. We have to fight for a more comprehensive sex education program, one that is inclusive of LGBTQ+ youth. We are working to make our feminism more intersectional, which means that we are not just focusing on reproductive rights and sexism in the workplace, but also racial and economic justice, the decriminalization of sex work, an end to the War on Drugs and so on.

It would be foolish to ignore the contributions of the feminists who came before us. Indeed, while I’ve heavily criticized Steinem, Albright, Schultz and Clinton, I don’t want to downplay how much work they and their peers have put into the struggle for gender equality.

However, as Steinem acknowledged in her interview with Maher, young women are angry about what is happening to them — just as those who came before us were. They fought to change things for the better, and we certainly do owe them a promise to not let these changes be eliminated. But in return, they owe us a choice — in who we vote for, in what causes we prioritize, in what we want our feminism to look like — and the confidence that we will make the right one.

Why I Won’t Be Watching the Oscars