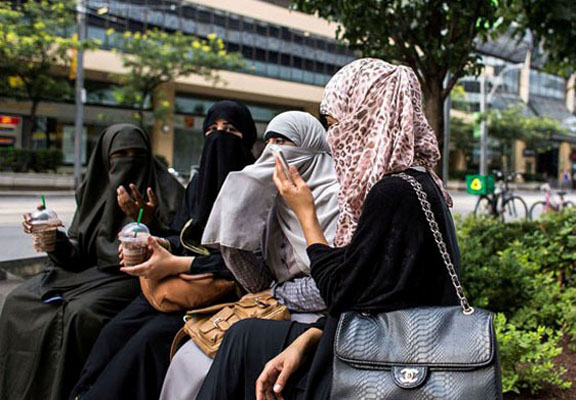 (WOMENSENEWS)–Zainab bint Younus was glad to recently learn that a court has upheld the right for Muslim women in Canada to wear a face veil, called a niqab, during citizenship ceremonies.

“There’s no reason whatsoever for the niqab to be banned,” said the 24-year-old Muslim, who lives on Vancouver Island. Bint Younus, a writer and feminist, has been wearing the niqab for seven years.

Last week an appeals court upheld a Federal Court decision from earlier this year that ruled the ban was unlawful because it “interferes with a citizenship judge’s duty to allow candidates for citizenship the greatest possible freedom” while taking the oath. The ruling has reopened the controversy and made the ban a campaign issue in the lead up to the federal elections on Oct. 19.

The Conservative government introduced the ban in 2011, generating much debate among Muslim and other communities in Canada and prompting a legal battle.

The government now says it will ask that this ruling be put on hold until it can take the issue to the Supreme Court of Canada. “When you join the Canadian family in a public citizenship ceremony, it is essential that that is a time when you reveal yourselves to Canadians and that is something widely supported by Canadians,” Conservative Prime Minister Stephen Harper said last week.

In a poll released this week by CBC, the national broadcast network, 72 percent of Canadians said immigrants shouldn’t be allowed to cover their faces for religious reasons while taking the oath of citizenship; only 19 percent supported the face coverings.

Lynda Clarke, a professor of religion and Islam and the chair of the department of religion at Concordia University in Montreal, called the ban unnecessary in an interview this week.

“If the issue is identification, the women I interviewed are very willing to lift their veils to be identified in various situations,” said Clarke, who authored the 2013 report “Women in Niqab Speak: A Study of the Niqab in Canada.” She added that the reasons the government has given for the ban are based on false assumptions, such as the niqab serving as a symbol of women’s oppression. “That is not borne out in speaking to the women themselves.”

None of the approximately 80 women interviewed for the report by Clarke said they were “forced” to wear the niqab. A minority said their husbands or families supported their choice; most actually faced opposition from within their families for wearing it. In the report, commissioned by the Canadian Council of Muslim Women, 44 percent of respondents cited religious obligation as their reason for wearing the niqab; 34 percent cited expression of Muslim identity.

Despite that, Harper’s position that the niqab is “rooted in a culture that is anti-women” has widespread agreement. A Global News/Ipsos Reid poll from earlier this year indicated that 72 percent of respondents strongly or somewhat agreed with Harper’s comment about the niqabs and burkas being symbols of oppression.

Raheel Raza, president of the Council for Muslims Facing Tomorrow, based in Toronto, also agrees. “As a Muslim mother who never saw a niqab when I was growing up in Karachi, Pakistan, I am astonished to see Canada’s judiciary caving in to Islamists who have nothing but contempt for Canada’s values of gender equality,” she wrote in an opinion piece for the Toronto Sun. “In the 25 years I have called Canada home, I have seen a steady rise of Muslim women being strangled in the pernicious black tent that is passed off to naïve and guilt-ridden white, mainstream Canadians as an essential Islamic practice. The niqab and burka have nothing to do with Islam.”

But for Zunera Ishaq, who brought the case against the government’s niqab ban, covering her head and face are integral to her religion. The 29-year-old, originally from Pakistan, hasn’t taken the citizenship oath because of the ban though she’s met the other requirements for becoming Canadian. The Harper government’s efforts to hold off this recent court ruling cast doubt over whether Ishaq and women like her will be able to take the citizenship oath in time to vote in the election.

For bint Younus, the decision to wear the niqab at age 17 was also a very spiritual one, she said. She grew up watching her mother wear the face veil, but felt no pressure to do the same.

“I hope it brings me closer to God,” bint Younus, an orthodox Muslim who writes a blog called The Salafi Feminist, told Women’s eNews. But she added, “I don’t need to justify why I wear the niqab or if it’s mandatory to my faith. The government can’t tell me what to wear or not to wear.”

Some governments do have specific bans on the niqab, including France and Belgium. But Jasmine Thomas, a doctoral candidate in sociology at the University of Alberta in Edmonton, pointed out in an article in the Canadian Ethnic Studies Journal that Canada promotes an official policy of multiculturalism, encouraging immigrants and minority groups to maintain their “traditional” practices. The Canadian Charter of Rights and Freedoms also protects the rights of individuals to continue their cultural and religious practices.

“Women have the human and religious rights to choose what they wear,” Thomas, who is researching immigration and anti-racism, said in an interview.

She added that restricting these rights can have consequences. “Banning the niqab potentially marginalizes a group of women in Canada who already face significant prejudice and discrimination. If a woman decides not to obtain citizenship because she would have to remove her face veil, that prevents her from fully participating in Canadian society.”

The debate has also flared up on Twitter, with some using the hashtag #DressCodePM to mockingly ask the prime minister to approve their outfits. Others have expressed their support or concerns with the ban.

@chevymo hijab, niqab, burkha, are not religious requirements, but symbols from misogynistic, barbaric societies. Should be banned ! Period

If u forcefully tell women what they can’t wear, how are u different from those oppressive societies who force women to wear #niqab #pnpcbc

Some also question why this issue has been prioritized, given the numerous other concerns, such as the country’s nearly 1,200 missing and murdered indigenous women.

The Conservative Party has vowed to re-introduce and adopt legislation outlawing religious face coverings at oath ceremonies if re-elected next month. The government has so far spent at least $257,000 on this legal fight. The opposition New Democrats and Liberals have said they’d let the matter drop if they come into power.

Bint Younus called the current government’s legal fight over the issue “an extremely expensive distraction” and a waste of tax dollars.

It’s “deflecting from real issues that affect our country, such as aboriginal issues, the environment and the economy. It’s stoking non-existent fires,” she said. “What’s so terrifying about a single piece of cloth?”