Meanwhile, the booby prize goes to “The Man from U.N.C.L.E,” a must-miss extravaganza of boy toys, special effects and outrageously aggressive women who serve as window dressing to a slight, inconsequential, unoriginal plot.

(WOMENSENEWS)– “Straight Outta Compton,” opening Aug. 14, is explosive. It’s loud. It’s relevant. And it’s brilliantly scripted by Andrea Berloff, a woman who stands her ground in a male-dominated domain. The movie tells the truth-based story of the culture-transforming rap group N.W.A. (Niggaz With Attitudes) and its famously talented and controversial members Ice Cube, Dr. Dre, Eazy-E, DJ Yella and MC Ren. Directed by F. Gary Gray, the two-hour hip hop music biopic sets the emergence of the legendary group as artists in residence within the context of their Los Angeles community, Compton, a rough, troubled city ruled by violence. Definitely go see it.

My other strong recommendation is “Meru,” a thrilling and visually stunning sports documentary that follows elite mountain climbers Conrad Anker, Renan Ozturk and Jimmy Chin as they attempt the first conquest of the Shark’s Fin, a treacherously challenging granite rock face on Mount Meru, one of the trophy peaks in Himalayan climbing. The film, co-directed and shot by Chin and Elizabeth Chai Vasarhelyi, features amazing climb footage (much of it shot by Vasarhelyi) and compelling interviews with the climbers and their wives, who are understandably torn between supporting their spouses’ ambitions and terror about the possible consequences of their high risk pursuits. The film is absolutely gripping, a unique adventure and travelogue. A must-see.

As for what is primed to be the week’s blockbuster, “The Man from U.N.C.L.E,” don’t waste your time or money. The movie is no more than a slick Guy Ritchie-rendered extravaganza of boy toys, special effects and outrageously aggressive women who serve as window dressing to a slight, inconsequential, unoriginal plot.

Then come the openers about which I am less hot or cold.

“Mistress America” is an appealing screwball comedy with a chatty script full of amusingly pithy wisdom. You’ll laugh, for sure, and perhaps relate to this second collaboration between actress-screenwriter Greta Gerwig and director Noah Baumbach. This is the team who brought us the well-received “Frances Ha” (2012). Here again they put their quirky spin on a story about a single woman living in New York City. This time it’s Brooke (Gerwig), a free-spirited Times Square resident and struggling entrepreneur who invites Tracy (Lola Kirke), a student at Columbia University and her soon-to-be stepsister, to be her companion and protégé. Reflected upon from Tracy’s point of view, the mentor-like relationship is an ongoing series of oddly liberating adventures that yield insight into the adult world. But perhaps Brooke is not her best teacher.

“Ten Thousand Saints” is a dramedy about dysfunctional family relationships with soap opera dimensions and highly nonfunctioning individuals. It coats its serious theme with a disappointing veneer of humor. But see the film for Hailee Steinfield’s performance as Eliza, a young girl coming of age among a sadly screwed up, drug-addled group of people in New York City during the 1980s. She’s not the main character, but her performance is the main attraction.

“She’s Funny That Way” is a Peter Bogdanovich screwball ensemble comedy with a big name cast. Co-written by Louise Stratten, the script revolves around the intricately incestuous interpersonal relationships among the creators and cast of a Broadway play. Farcical scenes are set in adjoining hotel rooms, casting-call confrontations and unexpected restaurant encounters. But they never score the big laughs they seek. The female characters include a call girl (Imogen Poots), psychiatrist (Jennifer Aniston), a reporter (Ileana Douglas) and the producer’s wife (Kathryn Hahn), and all are fairly stereotypical – or perhaps just too one-dimensional. Sad to see so much talent spent on an effort that just misses the mark.

“Final Girl,” one of two femme-centric thrillers opening this week, is the tale of a woman revenging victimized women. Abigail Breslin stars as Veronica, a young woman who was trained from early childhood to be an assassin, a complete weapon to be targeted at criminals who’ve otherwise escaped retribution. Now, at age 18, she’s sent to wipe out a gang of viciously sadistic teens who for no apparent reason – at least there’s no explanation given in the film – target, torture and kill blonde women. But they’ve never before encountered a blonde like Veronica. If you have fantasies of revenge, this stylishly shot slick thriller may satisfy them. But be prepared for violence in the extreme.

In “Return to Sender,” thriller No. 2, Rosamond Pike plays a lonely small-town nurse who arranges to go out on a blind date and winds up as the victim of terrifying circumstances, because of a twisted mix up with her date’s identity. Pike’s performance perfectly suits the chill of the film which, co-scripted by Patricia Beauchamp and Joe Gossett, plays right into women’s vulnerabilities. 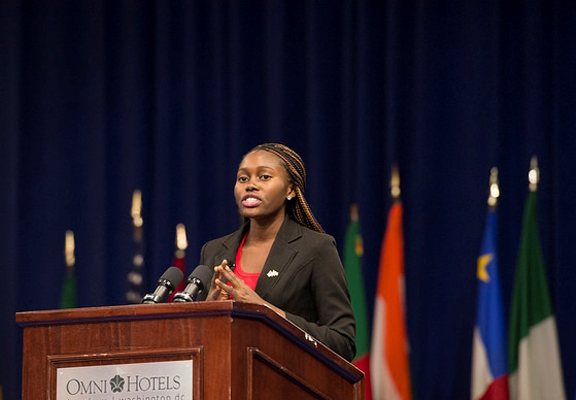 Hear My Story, I’m a Girl Who Got an Education